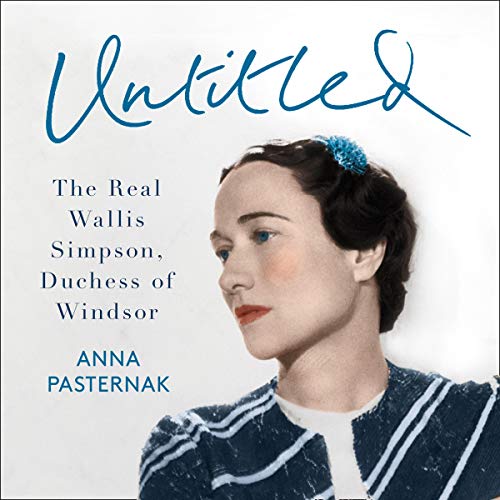 By: Anna Pasternak
Narrated by: Laura Kirman
Try for £0.00

Who was the real Wallis: an opportunistic American social climber, a master manipulator or the true love of Edward’s life? Amid the cacophony of condemnation her story has become obfuscated. Untitled is an intimate biography of one of the most misunderstood women in British royal history.

His charisma and glamour ensured him the status of a rock star prince. Yet Edward gave up the British throne, the British Empire and his position as Emperor of India to marry his true love, American divorcee Wallis Simpson.

So much gossip and innuendo has been levelled at Wallis Simpson that it has become nearly impossible to discern the real woman. Many have wondered why, when Edward could have had anyone he desired, he was smitten with this unusual American woman. As her friend Herman Rogers said to her in 1936 when news of her affair with Edward broke, ‘Much of what is being said concerns a woman who does not exist and never did exist’.

History is mostly perceived from the perspective of his-story. But what about her story? Anna Pasternak’s new book is the first ever to give Wallis a chance and a voice to show that she was a warm, loyal, intelligent woman adored by her friends, who was written off by cunning, influential Establishment men seeking to diminish her and destroy her reputation. As the author argues, far from being the villain of the abdication, she was the victim.

Anna Pasternak seeks to understand an unusual, deeply misunderstood woman and the untenable situation she became embroiled in. Using testimony from their inner circle of friends, she presents a very different Wallis Simpson. With empathy, intimacy and thorough research, this audiobook will make listeners view her story as it has never been told before.

What listeners say about Untitled: The Real Wallis Simpson, Duchess of Windsor

An excellent book in terms of research and approach to a story we think we all know. Clearly in depth research here and written well. But the narrator was stilted and awkward, often stopping mid sentence as she appeared to reach the end of a line. I battled not to return it because it's so interesting but I personally wouldn't listen to another book read by this narrator again

Obsessed with the Windsors

I absolutely adored this audiobook. I have read a lot about the windows, but I really enjoyed the way the author relayed all the details about their lifestyle, the jewels, the glitz, the homes but ultimately telling the very sad story in a very human way.
I nearly didn’t choose this book as I’ve read some negativity about the narrator. Please don’t be put off it’s a great book, I enjoyed every absorbing moment.

I very much enjoyed this book although I prefered Wallis in Love This book was sadly ruined by a narrator whose pronunciation was very jarring in places and who seemed to stop mid sentence almost as if she was turning the page. Doesn't anybody proof listen to these books? Towards the end there was a sudden jump back and replay of a paragraph or two.

I have always been fascinated with the story of Wallis Simpson; and like many people really could not understand what made a king give up his throne. This book gives depth to the characters and the complex background that surrounds this. I was left liking Wallis and felt such sadness for how history has demonised her. This book is so well written and also beautifully read that it both captivates and informs.

Wow, what an insight!

I thought I knew all there was to know about this story, completely wrong about our supposed Royal history! What an insight, this wronged woman who has been cast as a monster was nothing of the sort & tried to keep 'David', on the throne. All luminaries that contributed to the book, none had a bad word to say against her. I'd love to have been invited to one of 'The Windsor's' legendry parties. Excellent book, well worth the listen & highly recommend

Narrator poor-indistinct speech and didnt flow , impersonations weren't great.
Story is well known but perhaps tells a little more from Wallis 's side.
A true love story against the odds

Second read just as good as the firt.

I listened to this book a second time.. It brings back the memories, of the time of the death of the Duke. That started my interest. Very well wrote and researched, and as stated I enjoyed the book better the second time round.

Anna Pasternak has written a fascinating tale of Wallis Simpson.
However, the reading was most annoying with wayward pronunciations and many g's sounding heavily at the end of kinG.

Excellent book and well worth listening to. A new way of looking at this woman who has been cast as a she devil when in fact she was caught up with a very weak man who became infatuated with her. She really had no way to turn. Would recommend it

I am grateful to Anna for such a vivid deep honest yet respectful display of the true story. Amazed. In love

I enjoyed listening to this book that, for once, doesn’t vilify Wallis. Her story is remarkable, some of is happy and some of it anything but. The book doesn’t seek out to scandalize or reveal new gossipy details, but rather examines that which has always been there for us to know from a perspective of “hang on, maybe it wasn’t all her fault”.

Though I already admired Wallis before, this book made me do so more. Wallis’ perseverance and determination to make the best of a situation, even when the world was against her, is exemplary.