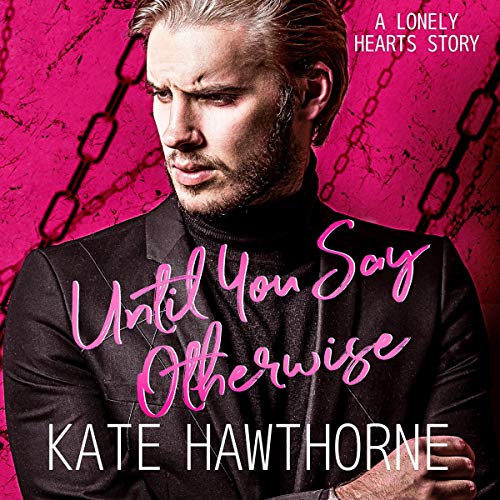 Until You Say Otherwise

By: Kate Hawthorne
Narrated by: John Dole
Try for £0.00

Richard is 36 and tired of the same old thing. A dom with a room full of underused toys and life of unfulfilled promise, he decides it’s time to move on from one-night stands and to search for something real and lasting. Richard wants someone who will submit and push their limits for him, but the last place he expects to find that person is on his doorstep.

Unable to continue living at home, he packs a few belongings and sets out on his own. Even though he's living in his car, he believes a decent future is within his reach, and he's ready to begin living his life and maybe even find love. With a little bit of luck and a lot of determination, Sam finds a job and also ends up in the company of a generous and handsome stranger.

Sam is still trying to figure out what he wants in life, but Richard already knows. He wants Sam - the vibrant young man with glossy lips and a hungry stare, and who looks so pretty on his knees. With his unconditional acceptance, Richard offers Sam something no one else has and, in turn, Sam inadvertently shows Richard a love he’s never known.

Somewhere along the way, play becomes serious for these two very different men. As Sam works toward being able to stand on his own, Richard is forced to face his growing affection for the man who kneels so willingly at his feet. When a near-tragic event puts their relationship into perspective, Richard realizes that sometimes holding on also means letting go. Will Sam be able to reconcile his need to be independent with Richard's desire to keep him forever?

What listeners say about Until You Say Otherwise

I love this series and now I want to listen all over again. A chance encounter and a willingness to trust allows Richard and Sam an opportunity to get to know each other and fall in love.
Narrator John Dole does a good job.

I really enjoyed this book when I read it, like the characters and the flow. I hate giving bad reviews but I was a bit disappointed in the narration of this book. I felt like it was just being read no real emotion behind the words.

Can't wait for the next.

Richard and Sam are brought to life with John Dole's narration! Definitely one of my top 10 Audios! This complex story has so much emotion, personality and intense connections so I was excited to see how it would translated to voice! Dole put the perfect tone and flow to each character that made them stand out and felt natural. Can't wait for the next.

Let me start by saying that I love this story. I have read it multiple times. Richard and Sam are fantastically written. Their story tugs at my heart. However, I struggled with the audio version. I am not sure if it was simply because the narrator just sounded too immature to play Richard or it just didn’t fit overall.

I think I fell in love with Richard in Love Comes After. He was a bit character, Chris's best friend and confidant also brother-in-law (sort of you have to read that book to find out). But what we did get was mysterious and intriguing. I loved this story. I think it is my favorite of the series though all the books are awesome.
Richard is just so sexy, Sam is so adorable and the two just fit. Though the story is very sexy with lots of BDSM, lots of sexy times, there is a good storyline to it.
If you like a good BDSM, Dungeons, D's and a really good age-gap I think this is for you.
I did listen to this as Audio and It was good. I will admit I liked the previous narrator better. Where John Dole did a very good job with the narration, pacing and even giving good emotions like sighs and grunts, I was not a fan of some fo the voices, such as Chris, Bennett, Aiden, and Josh. I found those voices all a bit overdone and just strange. Richard's voice was SAF and Sam's was cute and I guess that is all that really mattered.

Not such a creepy stalker

I adore this series. Kate has such a way with words and her characters leap off the page. I thoroughly enjoyed listening to John Dole bring Kate's characters to life. Just wonderful.