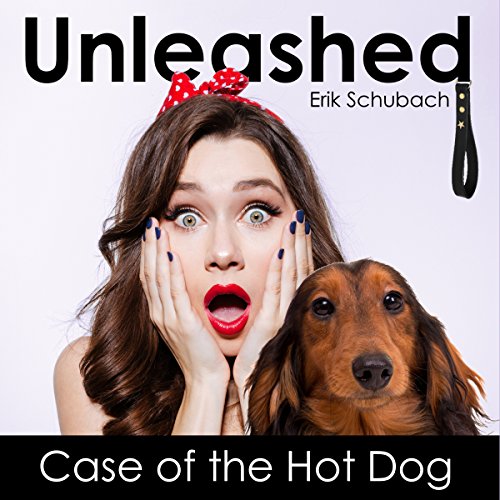 Unleashed: Case of the Hot Dog

By: Erik Schubach
Narrated by: Claire Buchignani
Try for £0.00

Finnegan May has had an eventful time in Manhattan since she first moved to New York City. Her unique profession and quirky, bubbly personality endear her to everyone who meets her.

She again finds herself in another misadventure when she rescues a long haired Dachshund from a hot car on the streets of the city. How was she to know that her propensity for doing the right thing was going to throw her into peril?

It is up to Fin's roommate and love interest, detective Jane McLeary to save Finnegan from herself.

What listeners say about Unleashed: Case of the Hot Dog

Cute series. I loved the first one and really enjoyed this one. Am excited for a 3rd..? Please!

More please! I also enjoy this narrator. Keep on writing. I only wish the books were longer. This was one was at least a pleasant 6 hours.

Gads, I want to Pun Hammer myself for that title.
But, Erik Schubach has delivered another fun adventure with Finnegan and her detective love interest. And of course little fury minions are involved as well. Who knew dog walkers were so much fun.

yet another awesome story from Erik. it was very cute and i just love all of Finn's little quirks.

I loved, loved, loved Unleashed:Case of the Hot Dog. These continuing adventures of Finnegan May, NYC dog walker extraordinaire, are so fun. Her roommate/friend, Detective Jane McLeary, is the perfect second main character. Note: Recommend you read the other two books in the series first. This one will make more sense.
Claire Buchignani does an excellent job with the narration.

Erik Schubach does it again! He thrills and enchants readers with Unleashed: Case of the Hot Dog Book 2. Beautifully narrated by the simply incredible Claire Buchignani, the story is a wonderful auditory treat that gives us an opportunity to revisit Finnegan, dog walker extraordinaire, in New York City. When we encounter her, she is busting out a car window to rescue and long-haired Dachshund trapped inside. Unfortunately for her, the body of the murdered owner is locked in the trunk of the car, and Finn is off to be booked at the police station. It's a good thing her roommate, Detective Jane McLeary is on the force and is able to ensure that her treatment by the cops isn't as unpleasant as it can become. Jane reluctantly shares information with Finn about the person found dead in the car trunk.
Finn discovers that the Dachshund she rescued is unregistered and manages to find that Oscar is the result of a puppy mill run by people who are even more unscrupulous than she at first supposed. The leader was working with another in hopes of getting a diamond-studded collar Oscar's owner purchased for him. Finnigan is caged and drugged with the hope of getting her to reveal the location of the man they are certain she's working with--the man who has laid hands on the collar but refusing to adhere to the original agreement. In an effort to get released, Finn convinces the man she knows more than she does and creates enough confusion to bring the cops and Detective Jane McLeary right to her rescue!
I simply can NOT tell you how enjoyable this story is! It fulfills the promise made by the very first book of the series. Erik Schubach grows the characters in the book as individuals and as a couple who are circling each other with romantic intent. The narrative is classy as well as fun and the world-building is colorfully creative within the backdrop of New York City. As seem to be a hallmark of his work, Erik's story is plausible as he gives readers elements that are believable. In addition, the conflict in the book results in an exciting, delightful resolution! I just want to dive into these books and live!