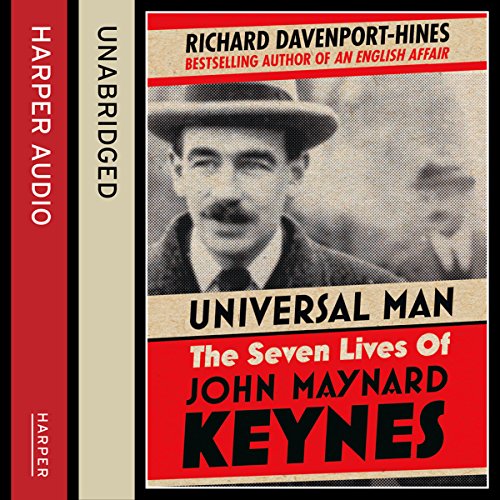 By: Richard Davenport-Hines
Narrated by: Sean Barrett
Try for £0.00

Published in time to mark the seventieth anniversary of the death of John Maynard Keynes, this thematic biography revives our understanding of the twentieth century's most charismatic and revolutionary economist, a man whose ideas continue to influence global finance today.

John Maynard Keynes saved Britain from financial crisis twice over the course of two world wars and instructed Western industrialised states on how to protect themselves from revolutionary unrest, economic instability, high unemployment, and social dissolution. In the wake of the recent global financial crisis, economists worldwide have once again turned to his ideas to confront their problems.

In this entertaining and edifying new biography, Richard Davenport-Hines introduces the man behind the economics: a connoisseur, intellectual, economist, administrator, and statesman who was equally at ease socialising with the Bloomsbury Group as he was when influencing the policies of presidents.

By exploring the desires and experiences that made Keynes think as he did, or compelled him to innovate, Davenport-Hines reveals the aesthetic basis of Keynesian economics and explores why this Great Briton's ideas continue to instruct and encourage us seventy years after his death.

"Davenport-Hines is one of our finest writers of non-fiction, with a habit of landing on fascinating topics." (Frances Spalding, Daily Mail)
"Davenport-Hines is a wonderfully crisp and funny writer." (Craig Brown, Mail on Sunday)
"A gifted author at the very top of his form." (David Kynaston, History Today)
"Davenport-Hines is a perceptive social historian who intelligently integrates great lives and great loves with great events." (Ian Finlayson, The Times)
"An impressive work of scholarship and as absorbing as a first-rate novel." (Selina Hastings, Sunday Telegraph)
"The masterly Richard Davenport-Hines." (Hugo Vickers, Country Life)
"An astonishing book, of meticulous research, which allows us to know, in painful detail, the men and women of that [Titanic] voyage...Davenport-Hines finds a new and heart-breaking story to tell." (Julian Fellowes)
"Davenport-Hines has a good eye for riveting details...powerfully original...a considerable moral as well as historical achievement." (Anne Chisholm, Times Literary Supplement)

What listeners say about Universal Man: The Seven Lives of John Maynard Keynes

A fascinating and successful double life

Unlike many biographies this book isn’t a chronological account but partitions the narrative into different aspects of Keynes’s life.

I don’t know much about economics but became aware of the Keynesian model of economic theory during the Thatcher era as her government favoured the opposing Monetarist approach. Economic theory doesn't figure heavily in this biography, however one does learn quite a lot about Keynes’s ideas as he helped governments to deal with their finances particularly at times of economic stress during and after the two World Wars.

Keynes is an interesting and colourful character for a biographer not least because of his energetic sex life. It’s a miracle that he didn’t end up like Oscar Wilde whose cruel demise must have been known to him as it occurred during Keynes’s lifetime. It would have been a tragedy if the latter’s important contributions to war-related international financial agreements and management of the UK economy had been lost because of risky encounters with casually picked up partners.

Keynes had many friends (and partners) among the famous men and women of his day and consorted with writers and artists particularly those of the Bloomsbury group. He was gregarious and hardworking, driving himself into an early grave by over-work when seriously ill.

I enjoyed this entertaining and informative book.

The narrator is good.

A fascinating biography of a man who has been fundamental to modern economics and about whom I knew nothing. This is not about his economic theories, although they of course come into it - other biographies tackle that - but about the man himself and the life he lived to the full. Very well read.