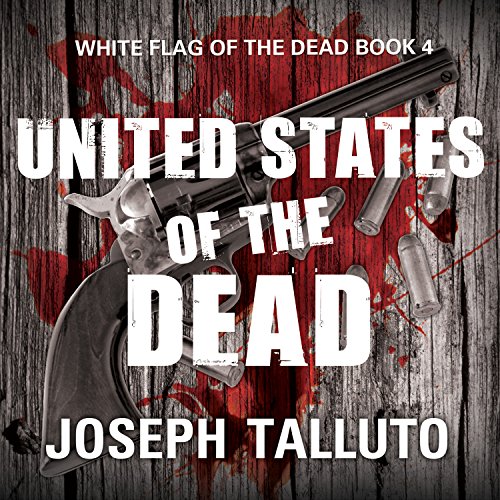 United States of the Dead

By: Joseph Talluto
Narrated by: Graham Halstead
Try for £0.00

During the Upheaval, city after city fell to the Enillo Virus, filling the streets with ravenous ghouls. Not even the countryside was spared, as millions of the undead flowed over the land. From the mountains of Appalachia to the beaches of the Atlantic, the East Coast was dead. Two groups must enter this nightmare. On one side is John Talon and his small crew, desperate to secure the foundation of a new country. On the other side is Major Thorton, bent on the destruction of the soul of the nation. In a race for the country, John must use all of his skill, determination, and resources to make sure the country does not forever stay the United States of the Dead.

What listeners say about United States of the Dead

A MUST FOR ZOMBIE FICTION FANS!!!!

This series is on my top 5 list for zombie fiction. The characters are well developed. John as the main character is believable, not over the top as the "bad ass" I'm listening to the next book in the series as I'm writing this review, couldn't wait!!

I started reading these books about 6 years ago I had finished the first book and got the other 2 for Christmas about two years ago. This Audible is the best thing ever weather I’m cleaning, driving, working or sometimes during a class I can read. Cant wait to get the next book.

Now that’s how you write a zombie book!! Best one of the series so far!! Best part is that unlike others (walking dead) they allow the characters we love and invest in to LIVE!! Thankfully some authors realize we do not enjoy reading about our favorites dying- we love happy endings. Even in zombie filled worlds...

Love this series! You will have so many emotions, love, fear, sadness.
I don't want to give anything away... just at one point I cried like a baby, in another part I laughed out loud. This is a must read series.

as usual another great sequel, couldn't put it down till the book was done and I knew all my fav characters were safe lol

Way too much talking about feelings!!!

this last book was not as good as the other two. It did not go into detail of how the virus started or what started it. you talk too much but I have people felt not enough action and too much technical stuff. I was expecting a huge fight scene with the colonel. That did not happen that was very disappointed.

This will be my last one in this series though there are more. It's very perdictiable, the lead character....

How is it that your finding a place for the night to sleep then all of a sudden your separated and saving survivors? How is it you have a group of murderimg mean hunting for you and you leave your door unlocked? How is it that you set up characters and events to happen without an outcome? I suppose I could go on and on. I must say I've never had a series that I'm constantly perplexed with the story line and not only do I finish the book but I also continue to purchase the next book in the series.😂
It's a need to know what happens at this point and I'm on a zombie kick so what the heck at least I like the narrator.