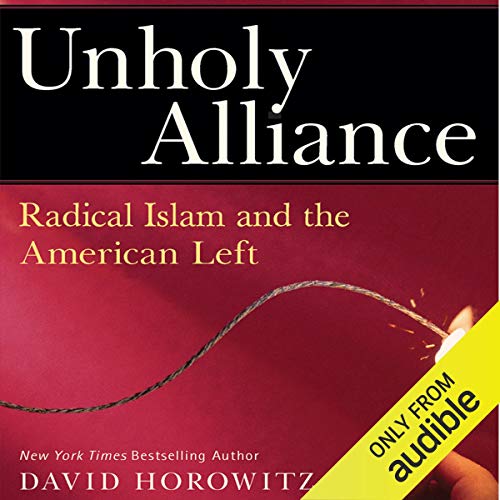 The best-selling Unholy Alliance is now in audio! Former leftist radical David Horowitz blows the lid off the dangerous liaison between U.S. liberals and Islamic radicals. With America's battle against the disastrous force of terrorism at hand, Horowitz takes us behind the curtain of the unholy alliance between liberals and the enemy - a force with malevolent intentions, and one that Americans can no longer ignore.

This should have been titled "Why the Iraq War was Right". Maybe that's a fair point to argue in itself, but the "unholy alliance" is treated tangentially.

Despite the attacks on 9/11, Ft. Hood, Boston-MA, Denver-CO, Fresno-CA, Tampa-FL, Columbus-Ohio, St. Cloud-MN, NYC, Orlando, Garland-TX, San Bernardino-CA, etc., totaling 43 on American soil with 226 deaths, 14 suicide blasts, only one Muslim in America has been killed in a vigilante "revenge" attack so the left's obsession with "Islamophobia" is not supported by body count. The American Left has joined forces with radical Muslims by uniting it's causes such as women's rights with support for Sharia Law (lol). Radical Muslims take lead on many of the left's community organizations or out reach projects such as the women's march where Sarsour became the leader of the women's march joined it with support for Sharia claiming it gave rights to women--neglecting to educate American women that Sharia makes women second class citizens subordinate to men in their family with limited rights all around. So yes it gives them rights but the question American women never ask what rights??? Liberals fall over their Muslim friends believing every word out of their mouths - not realizing the Koran gives them permission to lie to infidels. Liberals promeote diversity and what's more diverse than Muslim's different dress and Mosque's etc.

Must read, more relevant today than ever. What used to be liberals in the good sense of the word became fascist.

As in the past David's got another winner on his hands. I wish more people could read this informative little gem. Well worth my time.

Horowitz is a master storyteller and he formulates a foolproof argument of the exact reasoning why the left is in bed with individuals and organizations with communist and radical Islamist ideology. Horowitz does an excellent job explaining the true motivations of the activist left and the extent they will go to to further their cause, even if it means joining forces with radical Islam. This is a great listen. I highly recommend it.

What you don't hear in the news

The American Left (not American Liberals) seek to make radical changes in the West and are using Radical Islam as their temporary ally in that destruction. They have the fantasy that after the West is weakened or destroyed, they will triumph over Radical Islam.

Meanwhile, Radical Islam has a similar agenda with a similar fantasy.

How the Left, which claims to be liberal, can support Radical Islam, with its homophobia and its treatment of women and children is a mystery only understandable by grasping the essence of Horowitz' book.

well written very interested in how it happened get this it explains a lot buy it....

Good Info but presented in not the best way

Ya but only some one that is really into the subject matter.

It is non fiction

It is non fiction