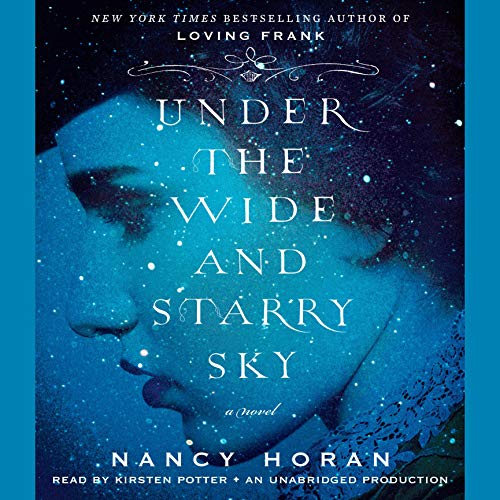 Under the Wide and Starry Sky

Under the Wide and Starry Sky

At the age of thirty-five, Fanny Van de Grift Osbourne has left her philandering husband in San Francisco to set sail for Belgium - with her three children and nanny in tow - to study art. It is a chance for this adventurous woman to start over, to make a better life for all of them, and to pursue her own desires.

Not long after her arrival, however, tragedy strikes, and Fanny and her children repair to a quiet artists’ colony in France where she can recuperate. Emerging from a deep sorrow, she meets a lively Scot, Robert Louis Stevenson, ten years her junior, who falls instantly in love with the earthy, independent, and opinionated "belle Americaine."

Fanny does not immediately take to the slender young lawyer who longs to devote his life to writing - and who would eventually pen such classics as Treasure Island and The Strange Case of Dr. Jekyll and Mr. Hyde. In time, though, she succumbs to Stevenson’s charms, and the two begin a fierce love affair - marked by intense joy and harrowing darkness - that spans the decades and the globe. The shared life of these two strong-willed individuals unfolds into an adventure as impassioned and unpredictable as any of Stevenson’s own unforgettable tales.

"Fascinating...a novel that shows how love and marriage can simultaneously offer inspiration and encumbrance." ( The New York Times Book Review)
"A lot of fun...Horan drapes this skeleton of facts with a richly imagined musculature of love, laughter, pain and sacrifice." ( USA Today)

What listeners say about Under the Wide and Starry Sky

A great story slightly let down by the narration

I would because it's a really interesting book and allows you to look at that period in history, and the lives of the people concerned, in an unusual way.

I like that is is about travellers and thoroughly creates the world of this 19th century bohemian family. I also like that it is a love story, but a realistic one. Louis and Fanny's marriage is very loving, but it is not without problems. Fanny, in particular, is a very interesting character; it's nice to see a woman in literature who is a realistic character, not a saint, a victim or a femme fatale.

I don't hate the performance, but if bad accents are a turn-off for you then don't buy this book. She is an American and can do neither a Scottish or an English accent, which is not great as more than half of the characters are British. Her performance of Fanny is very good though.

No. The book is fairly episodic (and long) and so suits the way I listen to it, which is mostly during my commute.

Nancy Horan - another good one!

Where does Under the Wide and Starry Sky rank among all the audiobooks you’ve listened to so far?

What other book might you compare Under the Wide and Starry Sky to and why?

It was similar to Loving Frank because Horan brought a real person to life. It reads like a novel, but it is very interesting to read about the history of Robert Louis Stevenson (in this book) and Frank Lloyd Wright in Loving Frank. Of course, I think Horan says that it is a somewhat factionalized account... They are both excellent listens!

Difficult to put down!

Thoroughly enjoyed this story! Performance was excellent. The writing was beautiful and thought provoking; providing a most pleasant experience!

Yes. It provides some literary history with some texture from the era they lived in and their personal lives.

I don't know how Nancy Horan does it but she transports the reader to the lives and times that she is writing about. "Loving Frank" is still my all time favorite audiobook.

Fascinating, eventful and charming. I loved it! Stevenson was an engaging and creative character, Fanny a devoted and loving wife. Through all the turmoil they remained dedicated to one another. The reader is gifted and makes a the story come alive with feeling. Her use of accents adds dimension.

Would you try another book from Nancy Horan and/or Kirsten Potter?

Yes I would. I felt this went on a bit long but that is more because of the lives these people led rather than the storytelling. Was pretty amazing to go from Paris to Monterrey to the south pacific. I knew nothing of RL stevenson's life at all and was really interesting!

Have you listened to any of Kirsten Potter’s other performances before? How does this one compare?

I had just listened to Station 11 and the content was so different that it was an odd experience frankly!

Not your typical love story adventure

Finally, a love story that doesn’t end happily or tragically. Horan is able to portray Louis Stevenson and his wife, Fannie as they really are, human. They both make mistakes, act impulsively and drift apart, which really happens to couples. It wasn’t love at first sight and happily ever after. I really began to under Fannie and her moods towards the end when Louis had his revelation when she was ill. It takes a lot for person to step back and see the situation for what it really is and how they got there. Louis was accountable for his part in their hectic lives and was big enough to own it and tell Fannie so. A part of me hopes that Louis really did understand how much work Fannie put into keeping him alive and what a toll it took on her and her children. As far as Fannie, I understand how other viewers may say that Fannie is all about herself and to a certain extent that’s true but who isn’t? I think Fannie was a woman before her time, a woman willing to do whatever it took to get the job done.

Overall, I enjoyed the audio book very much. I thought the narrator did a fantastic job differentiating the characters and their accents. I was very sorry that the book ended sooner than I felt like I knew each of the main characters so well by then. Even though the two parts of the audio book total about 16 hours, it sure didn’t seem that long. However, if I had read the book, I can’t say for sure that I would have finished the book eagerly. I have to admit there were chapters during the book that I thought the author could have hurried through.

I enjoyed the story about both Fanny and Lewis’s lives. I love historical autobiographical works even placed in some fictional moments. I’m looking forward to reading more of both their work now. Thank you for writing this book! We spend time with Sea Mercy in Fiji, Tonga and soon the Marshall’s. This reminds me of our time on the remote islands since 2012. I can feel the warm unhurried days and family the islanders create. Great work!

An interesting but much too long account of the relationship between Robert Louis Stevenson and Fanny Osborne, his devoted lover / wife. There are some wonderful descriptive passages, but the author went into way too much detail about the minutiae of their lives, which centered around Stevenson's poor health. Kirsten Potter is an excellent narrator.

The book started out a bit boring I admit but the more you read the better it gets! Very emotional roller coaster ride... defiantly recommend