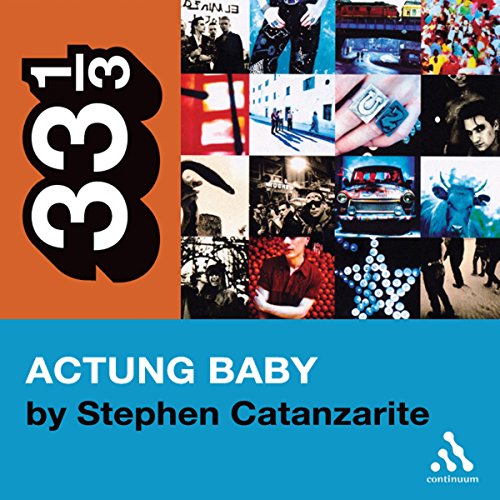 Meditations on Love in the Shadow of the Fall (33 1/3 Series)
By: Stephen Catanzarite
Narrated by: Jonathan Davis
Length: 3 hrs and 10 mins
Categories: Biographies & Memoirs, Artists, Writers & Musicians
2.5 out of 5 stars 2.7 (3 ratings)

If you thought U2’s seventh album was just a great band’s venture into dance pop, Stephen Catanzarite has some news for you. Achtung Baby, originally released in 1991 and having sold 18 million copies and counting, is in for the 33 1/3 treatment in this audiobook, earnestly narrated by Jonathan Davis.

Catanzarite announces at the outset that he will not shy from "name-checking the Almighty" as he attempts a reading of the album as a "meditation on love in the shadow of the fall". What follows are religious and political ruminations on subjects such as the sexual revolution (a bad thing) and theodicy, all through readings of songs like "Mysterious Ways" and "One". Catanzarite sees through a glass darkly, like St. Paul...or Bono in those glasses.

This dazzling and prophetic album seems to foreshadow the disintegration of the old world order and the splintering of traditional alliances that have marked the start of the third millennium.

In this intelligent and spiritually attuned book, Stephen Catanzarite reads Achtung Baby as an extended and universal riff on the Fall of Man, showing this to be an album that Bono rightly called one "heavy mother".

What disappointed you about U2's Achtung Baby?

More about religion than the album! This was the third book I have listened to in the 33 ⅓ series. Both Neil Young’s Harvest and David Bowie’s Low were great. This was a massive disappointment!

From the title and cover art you might think this is a book about U2's album "Achtung Baby".
This is not so.
This work is 90% theological treatise, 10% Achtung Baby.

Christian Opinion piece on the album

Lacking facts and details. Not much story about the band and support team. Hard for a non Christian secular minded person to listen to, because of faithful assumptions that not all people hold.

But if you want to hear a Christian Opinion on some songs on a U2 album it is ok.

I heard great things about the 33 1/3 series and when I saw they added this album to the series, I thought I would love it. I was VERY wrong.

As soon as it starts, it tells you that it will NOT be a blow by blow account of the making of the album. HUH??? I thought that's what I was getting when I downloaded it. Instead it is a very pretentious (even though the narrator tells you it will be...he was greatly underestimating that) pseudo-philisophical look into..something...I still haven't figured out what that something is, perhaps I'm too stupid to ever know.

meh....not much of a story about U2. disappointing. I do not recommend getting this if you are a fan of the band.

if your a U2 fan you will appreciate this NO END! it was amazing and i've listend to it at least 20 times! and shared it with my U2 friends and they loved it too! it takes Achtung Baby to a whole new level of understanding, this will blow your mind! it makes me want to shout, scream, sing and dance all at the same time, ive stopped it, i went back again and again, it made perfect sence to me! U2 fans will LOVE this, i cant say any more. AMAZING! BRILLIANT!