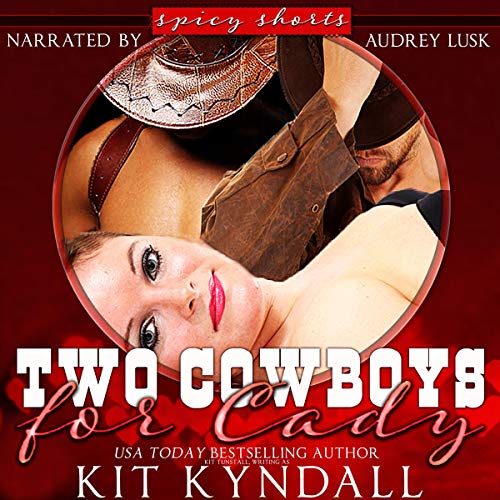 By: Kit Kyndall,Kit Tunstall
Narrated by: Audrey Lusk
Try for £0.00

SpicyShorts are compact tales that can be heard in a brief amount of time with no cliffhanger endings or multiple parts.

This is a short and steamy book. With a hot storyline and good characters. I wish it was longer. A good performance from Audrey.

Cady’s fantasies comes true with she goes home with Jace and Brody after meeting up with them in the local bar. Even better, they felt the same way about her. Audrey Lusk did an OK job with the narration. I received this free copy audiobook at my request and have voluntarily left this review.

The voice is just making this book so boring! Even though the story is short I just can’t with her voice!

2 Hot Nice Guys for a Change

This was a short, sweet, but romance about two cowboys and a curvy gal. While it was a short story, it was well written and you could feel a connection between the three of them, long wished for live that came true. It was nice to read about two nice guys for a change who acted like gentlemen. They were kind, caring and still hot. This story has a happy ending with the promise of marriage and kids. I would love to see some stories where a hea didn't include kids for childfree fans, few people write for us. A great story that isn't about bad boys for a change. Narrator wasn't great. Lots of breathiness. Sweet book though. Would have been better with a different narrator.

break up with a whole new twist

wow this story starts out fast and keep you going. Cady wants Brody and Jase and when she catches her man with another woman she gets her chance finding out they have always wanted her and want to make it permanent makes it all better