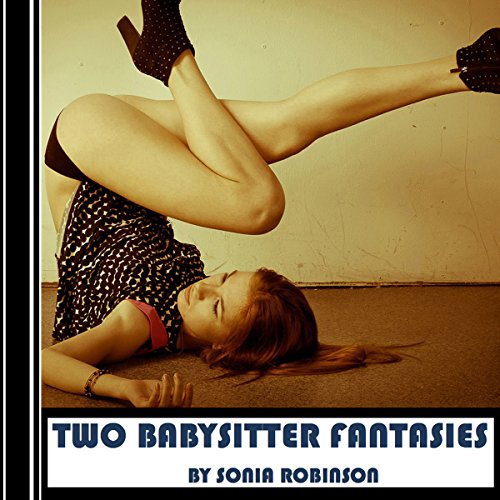 By: Sonia Robinson
Narrated by: Niley
Try for £0.00

A bundle of two steamy babysitting fantasies with soft and sensual narration. The barriers will melt away as the characters find that nothing is off limits.

"Lift the Babysitter's Legs": Caroline has developed a deep lust for Tom, the lawyer she babysits for. On the night of the story, she gathers the courage to seduce him. They sit on the couch in the living room, and she inches closer to him, finally putting her hand on his knee. Three sex scenes detail a game of domination and submission, and a pose so extreme that her entire body will get sore. Is Tom just playing with her mind, or does he really feel something for her?

"Borrowing the Daddy": After a night of hard babysitting, Meredith goes downstairs to make herself a sandwich. There, James, the daddy, is waiting for her. He candidly tells her about his wife's sexual shortcomings. She listens with open ears. Meredith offers him a massage, which starts slow and steady, then gets rougher and more sexually charged. She moves her hands lower and lower. She's always had a thing for older, fatherly guys and has been terribly jealous of his wife. She just wants to borrow and try him out for a while.

Content warning: Contains explicit sex, characters are 18+, meant for those not offended by hardcore erotica. Stories appear originally in The Honeypot Series, written by Sonia Robinson. The stories are narrated by Niley.

I was too late to return this title for a refund. Narration is appalling and should never have been released.
I couldn't finish as this terrible book. Can I have my credit back please.