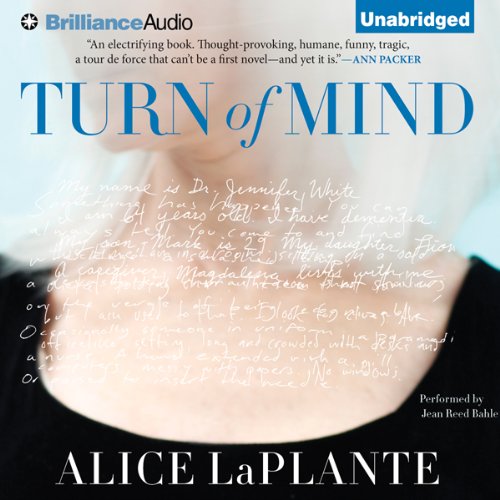 Alice LaPlante’s Turn of Mind is a spellbinding novel about the disintegration of a strong woman’s mind and the unhinging of her family. Dr. Jennifer White, recently widowed and a newly retired orthopedic surgeon, is entering the beginning stages of dementia — where the impossibility of recognizing reality can be both a blessing and a curse. As the story opens, Jennifer’s life-long friend and neighbor, Amanda, has been killed, and four fingers surgically removed. Dr. White is the prime suspect in the murder and she herself doesn’t know if she did it or not.

Narrated in her voice, fractured and eloquent, a picture emerges of the surprisingly intimate, complex alliance between this pair — two proud, forceful women who were at times each other’s most formidable adversaries. The women’s 30-year friendship deeply entangled their families, and as the narrative unfolds we see that things were not always as they seemed. Jennifer’s deceased husband, James, is clearly not the scion he was thought to be. Her two grown children — Mark, a lawyer, and Fiona, a professor, who now have power over their mother’s medical and financial decisions respectively — have agendas of their own. And Magdalena, her brusque live-in caretaker, has a past she hides. As the investigation intensifies, a chilling question persists: is Dr. Jennifer White’s shattered memory preventing her from revealing the truth or helping her to hide it?

Told through the voice of a woman with a powerful intellect that is maddeningly slipping away, Turn of Mind is not only a suspenseful psychological thriller that pulses with intensity but also a brilliant portrayal of the fragility of consciousness and memory, and of a mind finally turning on itself.

“ Turn of Mind is bursting with humanity, in full array. Impossible to put down and yet a book not only to be savored, but returned to. A glorious achievement.” (Jeffrey Lent)

Dragged a lot in the beginning. Lots of repetition of what it would be like to live in the Alzheiner's mind. Got much better as the plot finally came into focus.

Inside an aging woman's mind

Dr. Jennifer White-Not Jenny and definitely not Jen as she eloquently says numerous times- is slowly losing her mind to dementia. This story, told entirely from the viewpoint of Jennifer White, with all her mental losses, is a wonderful but sad trek through the mind of a mother who cared more for her profession than her chidden.

She finally must go live in a care home for the mentally deteriorating but has left a mystery behind her. Along with two adult children who never overcame the lack of mothers love they experienced and as a result have serious problems.

This novel, narrated wonderfully by Jean Bahle-who really gives me the picture of haughty professor and superior surgeon in her reading-slowly moves through the downfall of Jennifer White and of her chidden, Mark and Fiona.

Although the story does move slowly and was hard, at the start, to get in to I became more involved in it as time passed and towards the end I was completely enthralled by it. This isn't a book for someone looking for a lot of action in their plots but instead requires the listener to get to know Jennifer as her character is developed.

As someone who is a peer of Dr Jennifer White, and who has had that missing car keys/forgotten appointment situation happen, I became very involved in the story as it progressed. This could happen to any of us as we age and it's not a pretty sight. LaPlante has taken this woman apart and put her fact together verbally for us to get to know. Do we like her? Trust her? And, finally, did she kill her friend as the police believe? Listen carefully to the details and see if you can figure out the end before you get there..I sure was surprised.

This book puts the reader in a "dark" place. My Mom is suffering from dementia and it gave me some insight into the disease and brought sadness to my heart. This is a story about a family and is narrated by the woman with dementia. There is very little "light" in this book. That being said, it held my attention but I was glad when I finished the book. It stays on your mind between readings and at times is a "downer". There is a murder in the book but the book is not about the murder specifically but about the main character's life.

I pictured Helen Mirren as the narrator

What a challenge for the author to tell a story like this from the point of view of a woman suffering from dementia! I thought it was very well done, indeed. I loved the very beginning when I didn't know who to trust any more than the main character did.

Held captivated until the very end

I didn't know what to expect when my mother and I chose this book; my aunt had died of Alzheimer's and didn't know if if would hit close to home. My own personal history didn't matter, as the book is extremely well-written, and is basically a mystery of sort: Did the main character kill her neighbor, and will she be found out?

Alzheimer's is a complication that impedes the mystery story line in that way that only makes you want to read ahead to find out how it ends. I loved how LaPlante got us inside the main character's mind, taking us on the journey of dementia as well. Masterfully done.

I thought Bahle's performance was expert, distinguishing between all those voices was a challenge, but I was always able to follow along.

I found this to be a good read, but almost predictable in the end. Being in the world of a person with Alzheimer's disease is new experience, one that I could only imagine. Sure, I have known people with Alzheimer's, but that was an external experience. This book brings you into the disease process and adds a little mystery to the story, too.

The narration by Jean Reed Bahle was very good.

Told entirely from the point of view of a professional woman suffering from progressive dementia, this book is both intriguing and disturbing. Although the story line is that of a murder mystery, the investigation of the murder raises far deeper questions. Do we really know what actions we are capable of? What happens to our sense of self-identity when we lose our memories of the people we have known and the things we have learned and done? How would we react to important people in our lives, even those closest to us, if we met them for the very first time today? Aside from a slightly implausible final clue in the mystery's solution, this is a fine book and well-worth reading.

None of the characters are likeable, I suppose this is OK once in a while, but I prefer stories where I root for someone, and enjoy the characters.

This was just so SLOW and very disappointing for me - I plodded on thinking it might get better but it never did ...... BORING!

This book was nothing like I thought it would be. While it did show very interesting insight into the mind of someone with dementia, the story line was quite dull. I kept expecting something exciting to happen and nothing did. I listen to books while I'm on long drives so that I stay awake. This was not the book for that. The ending was so anticlimactic that I wanted to just throw my iPhone out of the window. Luckily I gathered my wits and didn't do that. Boring, boring, boring.