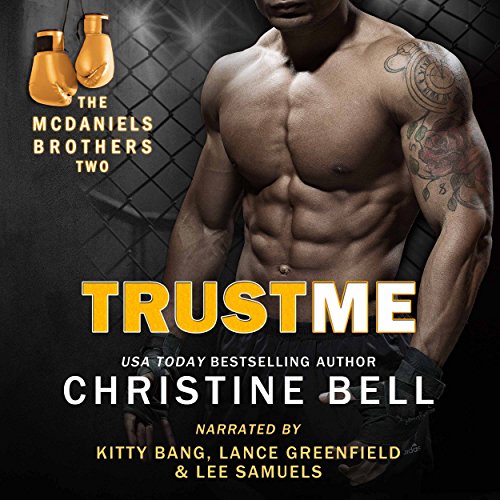 As the oldest McDaniels boy, it's Matty's job to take care of his brothers, but lately, he's been doing a sh*t job of it. His brother, Bash, is finally back on track to make a big name for himself in the boxing world, but when his golden opportunity gets taken away, there's nothing Matty won't do to fix it. Even if it means making a deal with the devil...and his bossy, redheaded protégé.

Kayla James wasn't always notorious Boston mobster Mickey Flynn's right hand. Before that she was nobody. He might not be perfect, but he took her in when she had no one else, and she'll be forever in his debt. If he wants her to manage his cocky new MMA fighter and turn him into a moneymaking machine, she'll do it...but she doesn't have to like it. Once she takes the job, though, she finds herself curiously attracted to Matthias McDaniels. He understands her better than anyone ever has, and she doesn't want to give him up, but it's only a matter of time before he discovers the truth about her.

What listeners say about Trust Me: Matty and Kaylas's Story, The McDaniels Brothers Book Two

BOOK REVIEW.....
I liked this book. Though not as good as the first book, the characters were still strongly written and developed.

AUDIO REVIEW......
The narrator's were all good.

"I was provided this audiobook at no charge by the author, publisher and/or narrator in exchange for an unbiased review via AudiobookBlast dot com".
L.

Love Maddy...His loyalties to his family is amazing for his age and to know what he wants from the get even better. can't wait for the next one.

What did you love best about Trust Me: Matty and Kaylas's Story, The McDaniels Brothers Book Two?

Matty and Kayla's chemistry. Off. The. Charts. Hot.

Matty. Much like Bash, loved is loyalty and love for his family.

Kayla's story. I just wanted to hug the HELL out of her.

Much like the rest of the McDaniels’ series, I read this one a while ago, and really enjoyed Matty and Kayla’s story. Out of the three brothers’ stories, I feel this was is the one with the most action and really nail-biting moments.

Loved that I got to revisit their story and remember how sweet could Matty be when he was alone with Kayla, and even when it was just him and his brothers.

This was my second time checking out this format and much like the first book, it was a fun time!

The voices were perfect, and mixed the interesting story and Ms. Bell’s storytelling, this was a perfect audiobook.

Just one more to go.

Gritty story made better by the performance!

This was a fabulous follow-up to Bash's story. We met Matty and learned his backstory in the first book and this book was all about making progress for the McDaniels Brothers's futures. Kayla was a perfect complement to that end, with her relationship with Mickey. We got to see Bash and Olivia and see how they are doing after their HEA.
I would also like to note that this story is not a replica of the first one with different names. It is unique, with different problems to overcome and a different focus. Obviously, as with anything, there are some predictable moves but I would say it has enough twists to round it out.
As for the performance, it was perfect. The story is very gritty as it deals with different aspects of Boston's seedy underbelly. The performers maximized on that. Their voices were rough and gravely as they told Matty and Kayla's story. It made it feel even more real. I would honestly say that I don't think I would have liked this story as much if I had simply read it and not listened as well.

Once again, thank goodness for box sets! I'm just not good with the whole waiting for the next book thing...

I really enjoyed Matty and Kayla's story--though I knew I would from the teaser at the end of Fix You: The Complete Box Set: Bash and Olivia's Story - Books 1-3 , of course. Ms Bell really knows how to throw obstacles in between her hero and heroine--Kayla's the only daughter of the man who's been making the McDaniels brothers' lives hell, just for starters--fortunately, she also knows how to (finally, eventually) help them find their way around (or in some cases straight through!) those relationship road blocks. Trust Me is no exception to that rule.

Matty often came off as more than a little gruff in book one--as the guy who gave up everything in order to get his brothers back after their mother left them alone, he certainly had his reasons--but in his book, we see his more human side. Family is still everything to him, but now he's got another focus--Kayla.

Kayla's torn--she knows that her father isn't one to walk the straight and narrow, and nor does he treat others fairly. But she also knows that here rescued her from a horrific situation years ago, and she feels like she'll always owe him for that. She knows her father will never agree to let her see Matty on a personal level, and she also knows that when Matty finds out what Mick plans to force him to do, he'll never want to see her again anyway. But still, she can't stay away...

The dual narrators for this one did a great job--I love it when dual POVs are narrated by separate artists. The whole "box set" concept meant that we moved seamlessly from one book to the next, no waiting required. And the teaser for Reid's book? Don't get me started! Let's just say there's a major surprise in that tiny teaser that has me itching to get my hands on his book ( Between Us, Book 1-3, The Complete Box Set: Reid and Lola's Story ASAP :)

Trust Me is the second book in the series, and though it would probably work fine as a standalone it does help to know the background of the McDaniels brothers/Mickey Flynn involvement going in. Plus, getting to see Olivia and Bash again in this part of the series will make you smile.

And then you get to that teaser...book three! I must have it...

I received a complimentary copy in exchange for an honest review.

Kayla James and Matty McDaniels have a complicated relationship.
Kayla is Boston mobster Mickey Flynn's daughter. Matty made a deal that made him Micky's fighter for a year.

Matty looks to the future and thinks that while he "serves his sentence" he could also build his reputation as a fighter and as a result, get better fights in the future.

Micky has other ideas. He only wants to use Matty for a year and make money of him, while grooming another fighter who will be his in the long run.

Kayla was ordered to work as Matty's manager. She wanted to be a fighter herself but wasn’t given the chance.

Kayla and Matty are forced to work together and in time learn the true nature of one another.

I liked the first encounter between them. Matty being honest and un PC telling her will be a distraction and her trying to prove what an asset she could be.

I liked seeing them get more intimate both physically but also emotionally, sharing their past and dreams with each other.

Would you be willing to try another book from Christine Bell? Why or why not?

Matty and Kayla were both trying to do what is best for their family. Granted, Micky was never a great father, but he was all Kayla had and it was hard for her to let go.

I understood her struggle in debating about revealing the truth of her father's intentions towards Matty.

I could also understand Matty's anger at her not confiding in him, especially after the personal relationship they developed. Matty was all in with Kayla, and it hurt him to think she was only using him.

But it was the push they both needed and after hard truths were revealed to them both, they started working as a team to bring Micky down and secure a better future for themselves.

Did Trust Me: Matty and Kaylas's Story, The McDaniels Brothers Book Two inspire you to do anything?


It makes you appreciate the family you have.

A supportive and loving family isn't a given. Not everyone is fortunate enough to have people who care and fight for them. People who make them face reality but will always have their back.

Matty had that and I'm glad Kayla got that at the end of the book.

The book ends with a major change for the McDaniels family. But a surprise visit may just derail them all from the new journey they were about to embark on.

Looking forward to the next book in the series.

I love is book

The way the book plays out you never want to hit pause or stop. All the twist and turns in the book you don't know what will happen next. When Matty make a deal with a bad man to get his brother bash back on track boxing he put his MMA in the man hand for one year to manage who hand it over to his right had girl Kayla the sparks fly before
they even know it . If you liked the 1st book the 2nd will knock your socks off.
I have got to get the next one.