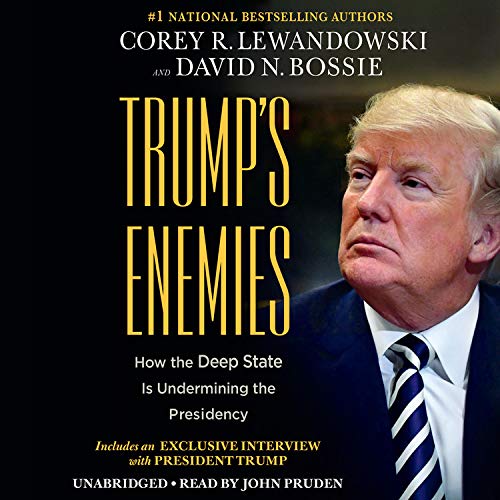 Corey R. Lewandowski and David N. Bossie, the authors of the blockbuster, Let Trump Be Trump: the Inside Story of His Rise to the Presidency, are back with their next New York Times best seller.

This book will reveal the heart of the hostile bureaucratic network that has been operating in the shadows until the American people voted Trump into office. Trump's determination to transform the government, wipe out the swamp, and reduce the power of the bureaucratic machine has set him on a collision course with agencies populated by a workforce resistant to the American people's agenda.

That collision, however, is one that the president is prepared to meet head-on. Why? Because it is the key to unraveling the very swamp the administration is determined to end. The listener will have a front-row, exclusive seat for the political battles inside the White House and the war it is waging against those government bureaucrats, establishment officials, and foes within the Obama administration.

This book will expose the political and bureaucratic underbelly, its struggle to survive against an unorthodox commander-and-chief, and its willingness to do almost anything to stop him.

What listeners say about Trump's Enemies

After reading their previous block buster Let Trump be Trump, I was prepared for a very aggressive review of this tragic Deep State attack on the President. I was not disappointed. The path through the chapters gave a great understanding of who played what role in the deep state web of confusion. Any person not reading the whole story could possibly believe the crazy stories that have been played out in the media.

Weaving the proper narrative without including boring details, keeping our interest, this is a difficult task when put on paper. The authors did their best and the book is so informative and interesting that I have listened three times already -

Thanks and keep up the good work

I liked their first collaboration on, -Let Trump Be Trump- and was looking forward to this new book. But the sourcing and research on this one has serious problems, at least in the beginning of the book, when they talk about the Papadopoulos involvement. According to the FBI, the entire -Crossfire Hurricane- investigation is traced back to Papadopoulos and his meetings in the early spring of 2016.
But the narrative in this book is at odds with what Papadopoulos has stated in various media accounts. They claim that Papadopoulos met Mifsud during a trip to Russia and was told about Russia having thousands of Clinton emails. However, Papadopoulos has never been to Russia, and has never even met any Russians. The Mifsud meet was in London. This book also describes the meeting with Downer as chance meeting with an Australian diplomat during a night of heavy drinking. Papadopoulos describes a very different scenario. The Downer meeting was carefully orchestrated through 3 different intermediaries, both diplomatic and foreign intelligence intermediaries. It was not a random, chance meeting. There was very minimal drinking, one drink each, and nobody was drunk. It was a serious meeting, and Downer was recording the meeting. And in the meeting, Papadopoulos didn't even mention emails. Downer has gone on record stating that Papadopoulos didn't mention emails and never used the word "dirt" to describe the information that the Russians had. To get so much wrong about something that is critical to the entire investigation, seriously damages the credibility of the rest of the book. It makes it look like the authors are more concerned about distancing the whole Papadopoulos scenario from the Trump campaign rather than getting the truth out. The rest of the book is now subject to more scrutiny regarding the credibility of the book.

One of the camps that helped Trump win 2016.

This is a great book if you would like to know more about Trump. It describes the different camps that supported him during his campaign from the perspective of Cory Lewandowski, a kid who grew up very poor and ended up being very successful through his loyalty to Donald Trump. Eventually however, the campaign proved too much for Corey and therefore was fired due to his inexperience at running a campaign at a national level. Ironically he was dropped and dismissed by one of the few political operatives whom actually got convicted for tax evasion; Paul Manafort. If you read this book I recommend reading others that explain the Paul Manafort side of the story. What is interesting about this story is even though Corey was fired he never sold out Donald Trump which is extremely commendable. However this book is riddled with a bit of hero worship as you could imagine someone coming from an impoverished background working for a multi-billionaire. What's also interesting about this book is that it documents how lean this campaign was. As everyone knows Trump spent very little on what could have been a really expensive campaign and this book describes how Trump was able to do that.

Great read especially for book club discussion. Everyone in our bookclub rated the book as excellent.
Reveals much about how politics work in DC and in the White House. Good read for liberals and conservatives.

Dave Bossie does it again

Dave and Cory again give the inside view of what President Trump is dealing with.

endless enemies for my president to face every hour of every day? Why is that?

Excellent Presentation of the Facts

I loved hearing the truth of the story of the Deep State attacks against Trump.

Excellent book, well written and a must read for everyone. I do my own fact checking and its right on!

Easy listen, full of good information, and lots of good behind the scenes information about the president and the journey after the victory in the election.

Def not worth the time or money. Their 1st book was pretty solid but this seemed very poorly researched and nothing new to learn. Gave it two stars just cause I like Corey but he def did not invest time and effort in this book.