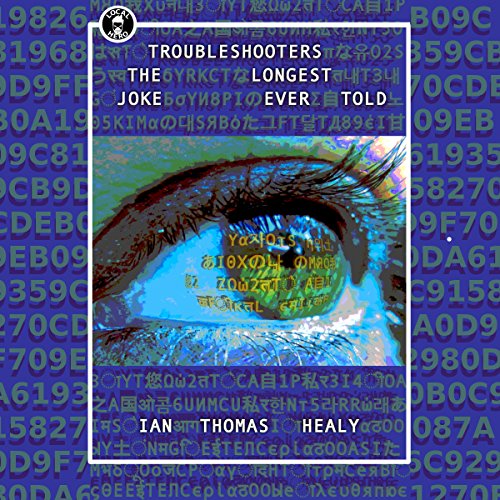 Troubleshooters: The Longest Joke Ever Told

Troubleshooters: The Longest Joke Ever Told

Such is the credo of the modern mercenary in the economic downturn of the late 2040s. Three such antiheroes are brought together by a billionaire for a unique search-and-retrieval mission. If they succeed, they'll walk away free and clear with a big fat payday. But if they fail... Well, things will go badly for them. Their quest will take them to the far corners of the Earth, from central Australia to Brazil to the Eastern European micronation of Borlovia, all in search of one of the world's rarest treasures: the elusive and collectible TIS bottle. Three bottles, three chances to succeed...or fail. What could possibly go wrong?

I hate working for free.

I requested a copy of Troubleshooters via Audiobook Boom, when I saw it was read by Nicholas Patrella, a narrator who has never disappointed me yet. And this is one of his best. So, my profound thanks to the rights holder for freely gifting me a complimentary copy.

Simple synopsis - Three loners, amongst the best in their fields (assassin, hacker and monowheel driver ) but down on their luck as far as well paid employment is concerned, team up for a really well paid commission: to steal a glass bottle for a mega-rich collector. There are only three of theses bottles left in existence. He wants one of them and the other two destroyed. Sounds simple except these other bottles are in the collections of a bishop in South America, a king of a trifling European country, and another billionaire in central Australia which has sealed itself off from the rest of the world. All will be hard to get at and heavily guarded. But think of the money....

Almost non stop action, explosions and fighting mixed with great characters, humerous dialogue and a few brief episodes of remarkable sexual tension. All performed by the remarkable Mr.Patrella whose pace matching, perfectly interpreted text reading ramps up excitement or slows down the tempo with full understanding as the story evolves. Each character is individually voiced, inflection and even accents delivered (near) flawlessly, non-English phrases rolling out effortlessly, too. His narration lifts an already fast and fun book into something no reader will want to put down.

This is a book I am happy to recommend to any adult reader who enjoys written larger than life unusual action, with a big slice of imagination and humour and quirky characters. It's very visual and enormous in it's range both across the world and even into space.
Hope there will be more coming soon.

I have read or listened to a number of books from this author and a lot of them have been about the heroes of Just Cause (not to mention their failings) but this one is distinctly different from those with the near-future setting and being focused on a main cast that could more generously be called antiheroes. One particular thing that they do have in common with those other books is that the main cast is an interesting one that serves to draw you into the book very effectively.The author does a good job of still keeping the story feeling grounded despite the crazy settings and adventures of this varied cast.

The narrator's performance was a good one overall, keeping the cast sufficiently distinctive in tone to help the listener's immersion and keeping the tone and pace at the right level for the story too.

Overall, the author has created another interesting world and cast in this book that all contributed to my enjoyment of it.

An interesting book with a strong plot and lots of action. I can almost guarantee you won't see the ending coming! Highly recommended for all fans of this genre.

Personal preference warning: content-wise, I was okay with the language and violence. It felt like it fit my interpretation of the characters and the world. The sexual content was fine for the most part but a lot of it felt a bit on the vulgar / "in your face" side which, in my opinion, distracted from an otherwise great story. I would have preferred those scenes to be either implied or much more subtle in delivery. If you are willing to overlook this (or make use of the skip forward button) then I think you will enjoy this story.

A couple things detracted from the overall experience. Some scenes were described in a way that felt a bit repetitious (e.g. descriptions of some of the action sequences). The above mentioned handling of sex scenes also were distracting. It's hard to say whether it came down to the writing or the narration of said scenes...

With that said, I DID enjoy the story overall and the narration was acceptable with some minor delivery gripes. Despite my criticisms I would definitely consider listening to more novels by Ian Thomas Healy and narration from Nicholas Patrella.

Healy puts crack in the popcorn with this novel.

What did you love best about Troubleshooters: The Longest Joke Ever Told?

Many stories that have an adversarial artificial intelligence would use it as the main story line. The same with corrupt religious leaders, rampaging cyborgs, out of control hackers and drug deals gone bad.
In Troubleshooters, these themes are mere story arcs.
Healy keeps taking you higher.

Angel, the assassin dominates the story and holds your attention at gun point. She focuses the action and characters at just about every part of the novel. Even when others antics are center stage such as Camaro's chase near the beginning, the action lands at Angels feet. Angels energy pushes the story right to the punchline.

Have you listened to any of Nicholas Patrella’s other performances before? How does this one compare?

I can't recall any other works I have heard narrated by Nicholas Patrella, but he did a good job differentiating the characters tonally. His performance helped carry the story along. His energy in the action sequences, especially, riveted your attention.

I could see Troubleshooters as a movie or better yet a miniseries. The international venues and exotic tech would give each episode a different focus. The series has action, gadgets and a bag of chips.

Hold onto your hat...

Grab on to something sturdy, and hold on to your hat... You're about to be blown away by this blockbuster of a tale!
This is an action packed heist story, which is a trope that I've come to realize is one of my favorites... I love that edge-of-the-seat, spine tingling sensation I get when the characters go for the prize (Please Don't Get Caught, DON'T GET CAUGHT). And it gets me every time!
This is the story of Angel, sometimes know as Angel of Death, she is a kick-butt, no nonsense hit-man, er, hit-woman, who happens to be down on her luck for the moment. She takes a job sight unseen, and she is told that she'll  need a team. Her 1st  recruit is Haiwee, a kick-butt hacker. For her Wheelman,  she enlists Camaro, a monowheel racer who just possibly has more balls than brains... With her team chosen she's ready to discover what she has gotten them into... and it's gonna take all 3 of 'em if they want to complete the job and collect a 9 million dollar payoff!
I loved the audio edition of Troubleshooters. The narrator, Nicholas Petrella, handled all the characters and accents with aplomb... and I actually laughed out loud, because at times Nicholas sounded more like a spectator (not a reader) who's actually watching the events as they unfold, exactly like that excitement a sportscaster conveys as they describe the high speed, bumper to bumper, adrenaline driven antics of the drivers in a Formula 1 race!
And the ending... Wow! Lets just say it slayed me... I really hope the future brings us more stories in this series. Go team Troubleshooters!

Really well written! Truly the longest joke ever told! Storyline is very involving, with Professional Narration. Vocal pressure is excellent in application. Has an extremely well written ending, that cries for a sequel!
I recommend this audiobook for ages 18 and older due to explicit sexual description occasions in a few portions of the story, even though tastefully written.
I was given this audiobook for free and I freely give it my rating and opinion.

Subtitle put me off, but great book

The subtitle put me off, but I dove in anyway. Glad I did. Fun characters, great sci-fi concepts all told in a fun, fast paced adventure that did not disappoint. The subtitle – and the pay off for that at the end of the book was the weakest feature, but somehow still came together and was satisfying.
Talented Voice actor.

Fans of Johnny mnemonic will enjoy this

If you liked Johnny mnemonic this will be right up your alley...a future where the world is chipped cybernetic enhanced humans have the best opportunities to get the job done. A job comes in for the angel of death...but it’s not one she can do alone. She needs a Hacker, the Dove and a driver, a real cocky kid whose world view is about to change. The job? To retrieve a bottle and destroy the other two making it the last in existence. Obstacles abound. Artificial intelligences. Great battles and more. Really well written and narrated. Be aware this is NOT appropriate for young listeners (sexual scenes). I was voluntarily provided this free review copy audiobook by the author, narrator or publisher

This is an action packed story in the somewhat near future where 3 mercenaries are hired for a mission that'll lead each of them to the ends of the earth attempting to retrieve a TIS bottle. And of course cause they're mercenaries you already know the stakes are get it or die trying.

And well it starts there and the stakes just grow as the story goes on. It's super tense and exciting as every time you think the author's reached the highest point he takes it a step further and the narrator is right there to go with them leading all the way up to a fantastic ending you won't see coming.

I received the review copy of this audiobook at my request and have voluntarily left this honest review. I loved this view of the future, even if I'm not sure how jazzed I'd be about living in it personally.

What a rollercoaster of a story; such an exciting listen. Writing was strong and the story was unpredictable and unique. It certainly kept my attention throughout. There is a degree of depth here that is rare to come across, I really felt immersed. Definitely recommend!

Narration was strong and enhanced the experience greatly.