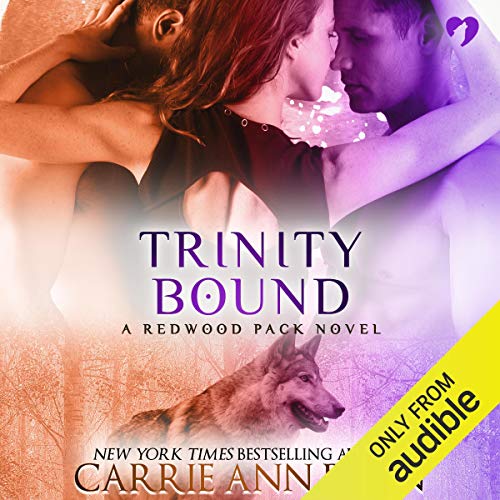 Hannah Lewis, a rare earth witch, is taken from the only life she's ever known. Held at her will by a sadistic wolf, she almost gives up hope that she'd ever see her real life again. But as her fellow captive, a werewolf named Reed, tries to calm her fears, she begins to feel a spark of something she never thought she'd feel - love. But is Reed, alone, enough to get her out of this dark basement so she can move on with her life?

Reed Jamenson, the artist of a werewolf Pack of Alpha males, knows instinctually that Hannah is his mate. Thus, despite their imprisonment, he will do all to protect her and then worry about their hearts. But is he strong enough to find a way for both of them to escape? And why does he feel as though something else is missing?

Josh Kolb, an ex-military human, stumbles upon Reed and Hannah and finds he must trust this new world of supernatural beings to survive. But that desire will lead the three to a triangle of attraction that will test the boundaries they all possess and its consequences in defeating the enemy. Can they all trust one another to save themselves and life as they know it? Even at the cost of their own hearts?

What listeners say about Trinity Bound

A really good read, with non stop action, and enough alphas for anyones imagination, I was hooked from the start. Interesting characters and plenty of twists to keep the plot interesting, and good narration. I received this book in exchange for my honest review.

This is such a amazing and powerfully written book. I especially love that there was the relationships between everyone but also individual relationships. So many books with a triangle tend to have them all together or very seperate. But this one was everyone involved in the relationship cultivating their own relationships within the triangle.

This is a must listen series if you love paranormal

In my opinion, Trinity Bound was the best Redwood Pack novel yet. I loved the triad relationship between Reed, Hannah and Josh. I loved that we got some sexy times with all three of them as well as one-on-one couplings. Best of all, I love the building story arc surrounding the war with the Central Pack and that these stories play integral roles in moving them forward.

I've grown used to hearing Gregory Salinas's narration of this series. Recently, I read a novella from the series (set many books in the future - I read out of order), and it was his voice in my head as I read. He's really fantastic in these roles.

Beautiful Story of Discovery of Love Between Three

I would definately recommend this book and the entire series. I intially read the last book in the series and so just had to read the 1st one. The book starts with Reed getting captured and he meets Hannah in the prision where she's been help captive for several weeks. Josh overhears about hte capture of Reed and his senses homes in on the location of Reed and Hannah. Reed immediately knows both Josh and Hannah are his mates. While escaping from capture all three are trying to figure out what is between them and how to deal with it. Reed is comfortable with a relationship with both Josh and Hannah. Josh has never been with a guy before so the attraction to Reed is scary for him. Then Josh is bit by the Demon introduced in the previous book and so the relationship is with a partial demon, werewolf, and witch creating an interesting triangle.

What was one of the most memorable moments of Trinity Bound?

Introducing Josh and Hannah as his mates to the family.

The fire scene where they have sex and for the bond as humans.

All my emotions were involved and I giggled and laughed and got angry at what happened.

I really enjoy the series. Some of the novels I read more than once. I suggest the series be read by others.

Reid knew she was his mate but somehow knew something was missing, when Josh shows up to help them escape he knows what was missing had found them. Through deamons, and fears this triad made sure their love was a forever love

After being taken by the Centrals, Reed ends up in a cell with a witch, Hannah. When he realizes she is his mate, he knows he must protect her. On the outside, Josh has the weirdest vision of his life - two people he hasn't met in a cell. He finds them and gets them out, but not without consequences. Reed takes his mates back to his pack and they get settled in...or so they thought.

If you've been waiting for Reed to get his story, this is your lucky day!

Wow, this book was hot, hot, hot. I loved the absolute dynamics of the relationship of the three involved loves. I loved how the family was so loving toward the mates of all. Everyone was and is welcomed.

This is an amazing story Redwood Pack 3 shows the strength and love between 3. The plot and character development is amazing love the narrating of Gregory Salinas.

Characters are one dimensional and unimaginative. The plot is dull and hard to flow with huge holes. I was rolling my eyes at the sad and cringe worthy dialogue. I feel bad for the guy who read this. He gave it his best but with so little to work....

Not my kinda Minaj

The characters were each more interesting in this book, and the internal struggles more believable. With that said I couldn't get into the sex in this book, a little beyond my comfort zone.

I don't normally write reviews, but felt compelled to let the world know that it was a struggle to get through this book. This is my first book by this author and narrator. Slow book. Weak story line. Focused too much on gratuitous sex. For Hannah to be a unique "powerful" Earth witch, she was pretty darned useless in the book. If a character is going be have the profession of a Navy SEAL, they should be a bit more badass. Not my cup of tea.