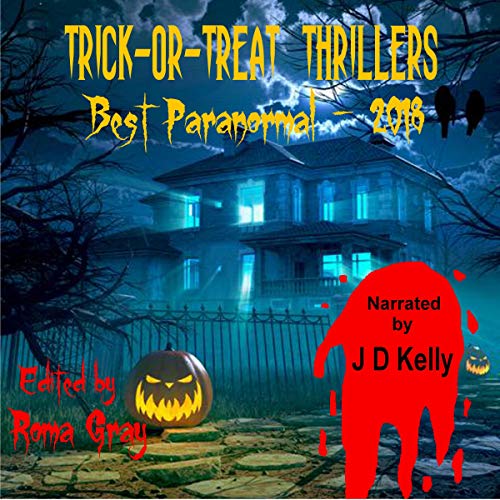 Ask yourself - is this mere fiction?

That’s what 27 writers want you to consider, here in this collection of the strange and terrible, the shocking and amazing, the frightening and awe-inspiring. Assembled here for easy perusal are some of the finest tales of ghosts, zombies, witches, cryptozoological freaks, monsters, and aliens of the past year.

Lock the doors, latch the windows, draw the shades, and dig in.

What listeners say about Trick-or-Treat Thrillers

The short stories in this collection range from good to outstanding. Although all can be labeled as fantasy, some are horror, some are more science fiction, and a few are pure fantasy. Although only a few are “ scary”, they are all good stories. I enjoyed the little biographies that accompany each story. J D Kelly did an excellent job with the many voices needed with this collection and was never distracting.

Enjoyable shorts from a whole bunch of authors. I liked the addition of little interviews at the end of each story. Good, bite-sized stories for the commute. Well done by J.D. Kelly. Good stuff!

I enjoyed the book and performance overall. Kelly has a great narration voice and does a good job with adjusting for dialogue. His style was better for some stories than others, but overall nothing distracting. If you enjoy the paranormal this is a good collection for you.

This book has many short horror tales that are sure to give you quite a scare. The tales are very descriptive and well written. I highly recommend this book for tales to scare your friends. I received this book at my request. I am leaving my honest review here of my own volition.

I enjoyed this collection, as in most Anthologies, there are a few stories that stand out from the pack. All the short stories were good in their own way, this is an impressive group of Authors many are "New to me." Here are my top three favorites from the collection. 1) Scarecrow By David A Simpson. Here we have Jessie who was getting restless once the immediate threat died down after the initial Zompoc. He leaves the safety of the walled community that is trying to rebuild a civilized county. Jessie becomes a "Retriever", for excitement, they always have the best stories. It had been years since the world fell apart. Jessie retrieves those memento's people were forced to leave behind when they first fled to survive, for a price of course. On one of these trips, he comes across a young child on the roof of an RV. Things get more exciting after their chance encounter. A stroke of genius is where this story had to have come from. 2) Trap door by Roma Gray. People freak over a tiny house spider, could you imagine the stark terror of having huge trap door spiders living on your land where you look like a nat to them? I know several people who would not have been able to entertain the notion of this. It would be too much for them. I enjoyed the imagery that she pained in this story and I could only imagine the stark terror. 3)Cold hands warm hearts. By Mark Woods. The moral I took away from this story is that Adults should tell children the truth. Had the children been told the truth of their school friend dying the following tragedy could have been avoided. This was an interesting twist on the innocents of children. The Narrator didn't have a wide range of voices which would be fine for a single story, but when there is an anthology with many stories it would be nice if they took on the characters, Instead, the voices in the stories all ran together. If you were not paying attention it would be easy to miss the transition into a new story.

Some good, some not so good

As with most Anthologies, this collection had some really good, scary tales and some that just didn't mesh for me. The stories were actually in several genres, such as horror, sci-fi, and fantasy. I was expecting more horror and less "other", but most were still entertaining. The stories included several different villains: zombies (YEAH!), huge spiders, demons, ghosts, vampires, aliens, gargoyles, the Grim Reaper, and some other unknown monsters. My favorites in this collection were by the authors that I have read before, namely Roma Gray, Christopher Artinian, Dona Fox, David Simpson, and Kerry Allan Denny. These authors did their usual great job at drawing in the reader and giving them a chill. Several of the stories will definitely stay with me a while. The zombie tales were great and the huge spiders were creepy enough to make me afraid to walk outside without thinking about trap doors. Some of the stories were a little long and didn't hold my attention as well as the shorter ones, but that might just be my own opinion. I did enjoy the autobiography and author questions that were included at the end of each story. It is always fascinating to hear what the authors have to say about their work. I always know that when I pick up a collection offered by Roma Gray that I will be entertained. I would recommend this collection to anyone who enjoys short stories in the horror/paranormal genre. The narrator, J.D. Kelly, did a good job and his pacing and voices were spot on, keeping the listener's attention throughout. I was given the chance to listen to the audiobook version of this book by the publisher and chose to review it.