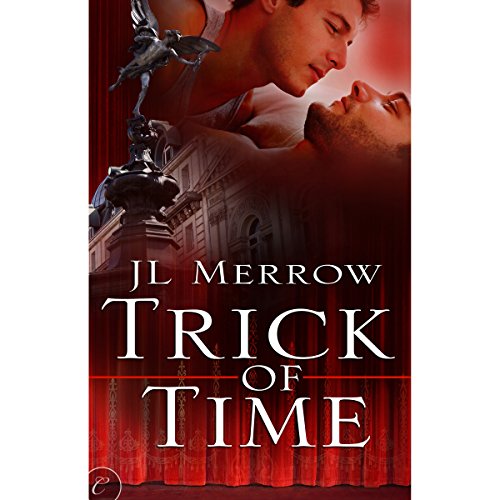 A lover from another time...

When Ted Ennis steps out the doors of the Criterion Theatre for a cigarette and finds himself in Victorian London, he begins to doubt his sanity. At first he thinks it's all a film set, and is sure that the strikingly handsome young man leaning against a lamppost must be the leading man.…

What starts as a sordid transaction with a beautiful rent boy quickly turns into something much deeper, drawing him back again and again as he gets to know Jem and craves meaningful encounters with him.

But Ted doesn't understand the exact conditions necessary for his trips through time - and for Jem, time may actually be running out. Now Ted has one last shot to get back to Jem and save their relationship, before it's too late.…

Really enjoyed this quirky little listen. Something a bit different. Time travel with a twist.

Can't even get through it to rate it!

I tried 3 separate times to listen to this book. For some reason I couldn't listen to the narrator for more than a chapter and, even then, couldn't follow the story. I won't buy a book read by this narrator again. I advise listening to a sample prior to buying. I wish I had.

Got my heart racing a bit, it did

What made the experience of listening to Trick of Time the most enjoyable?

I don't usually get so caught up in stories. I hardly ever feel anxiety about the ending when I read a romance, since most romance publishers require a happy ending. This story is well-written and gripping, and feels different than the normal genre-conforming romance short stories I've read. I became so invested in the characters that I had to skip ahead to the end before I could continue with the story.

I think Ted is a great character, and much of the reason I felt so much anxiety during the story is it would be just as easy for him to break completely as it would be for him to find redemption. I also quite like Jem, and find him sweet, though he is not as convincing as Ted.

He did a fantastic job with the accents in the story, using slightly different tones and inflections for each character. It was a little difficult to get into his reading of the story at first, however, as his voice is not my favorite, hence the four stars instead of five. He's a talented voice actor, though, and I think most people will enjoy his reading of this.

Wish there had been more sex, but as the story is only about 3 hours long, I GUESS it was a reasonable amount.

What did you love best about Trick of Time?

I discovered this little gem on sale, didn't expect anything from it but suddenly there was this fantastic little time traveler story. so the unexpected trick was the great plot. the war veteran and the hustler. The older age of the story setting vs the even older times of 18th century. well written great characters that grew on me.

Ted . he was such a well developed character disabilities and all . the way he went from a bleak solo life to the brilliance of companionship and love.

If you could take any character from Trick of Time out to dinner, who would it be and why?

ted of course. His character reminds me of a friend from long ago. One that should have had the life ted ended up with.

I really like the blend of the hero that rises from he disadvantages life has dealt him and even thru the painful struggles rises to a promising future and actively works to attain it. The narrator was amazing as well. Kudos

Ted's accent didn't suit his character. I have watched a fair bit of English TV and never heard that accent outside Shakespeare.
I thought the time travel aspect would be interesting, but it added nothing to the story. I got bored and skipped to the end to find out what happened.

Fiction, romantic fiction, historical fiction, time travel fiction, m/m romance. This story checked several of my favorite boxes. But it was almost a DNF. The narrator....oh my.. Listening for the first few minutes, my thoughts were WTH? Have I stumbled onto a badly performed modernized version of Shakespeare as performed by a Pompous Pretentious Exaggerated Over-Dramatized rendition of Hercule Periot who dun it. "And the ....Butler!!!!....did it.......in the Drawing....Room!!!!"I had a few minutes waffling back and forth whether or not I wanted to continue.I decided to keeping listening, and as usual, once you've listened for a few minutes thenarration becomes "listenable".And it ended up being an ok short story. Certainly not JL Merrow's best, but as a rule I love her writing style and this was no exception. I liked Ted and Jem, and the descriptive writing of the contrasting modern vs victorian England was good. This story would have been great as a longer more fleshed out novel.Jem and Ted were sweet, star-crossed and drawn to each other from the start. Even in the shortness of the story, I felt the chemistry between them. And I will admit that the narrator did a good job with Jem's cockney accent.

I liked them both.

Who would you have cast as narrator instead of Fleet Cooper?

I think that Fleet Cooper has a good grasp of accents. Each character had a distinct voice.But Way Way Over the Top Draumatization.!!! Interrupted, disrupted syntax with emphaasis on the wrong words sometimes.
Whoever was the director of this audio book should have had him tone down the
Shakesperian drauma.

Was Trick of Time worth the listening time?

The narrator, Fleet Cooper, did a very good job. Initially, his voice seemed a bit stilted, but as the story progressed, we learn that Ted has been injured in an accident and has a speech problem. Under stress, Ted sometimes can't even speak. The stilted reading may irritate some listeners, but I thought it did well in reminding the listener of the speech problem while still allowing the words to be understood.

I found the plot interesting. I enjoy time-travel stories and this one had a completely different take. I could easily follow Ted's thought process as to how time-travel worked, and even though the ending was predictable, there was still that possibility that maybe something would go wrong.

Nice story...but could have been better, maybe if it was a bit longer. I didn't really like the ending all to much... This is not a read again book... just a one timer.
For the price, I would just buy and save my credit.