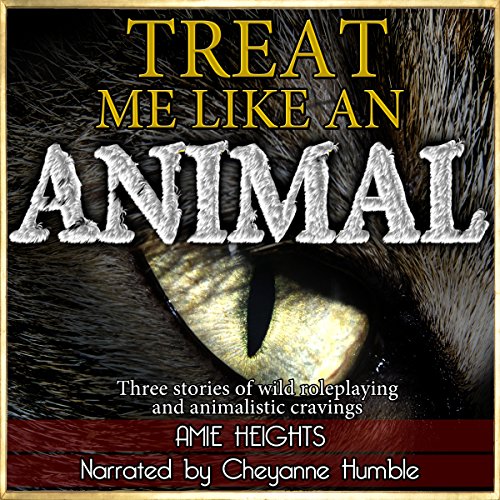 Treat Me Like an Animal Collection: Three Stories of Wild Roleplaying and Animalistic Cravings

Treat Me Like an Animal Collection: Three Stories of Wild Roleplaying and Animalistic Cravings

This selected collection has three unique stories of steamy roleplaying for the untamed and carnal listener.

Treat Me Like a Pony - The bridle, the bit, the spurs, and the riding crop. Paige learns that the everyday tools that a cowboy uses to control his pony can be used for other things, too, when she takes a detour out of the city and meets a young farmhand named Heath.

Hunt Me Like a Fox - Cold and exposed to the Oregon forest, Fionna Guarascio is being hunted by her boyfriend so she can experience what it is like to be preyed upon. Armed with a paintball gun to mark his trophy, Garrett McKenna tracks her like a true hunter on the trail.

Treat Me Like a Kitty - Luna Barnes knew there was something special about her new boyfriend Jan-Michael Murphy from the day she met him. She never would have guessed what he would ask her to do one night: to act like a kitten for him. It seemed like such a simple request, but she had no idea exactly what it would entail...until she found herself wearing a little pink collar with a bell.

What listeners say about Treat Me Like an Animal Collection: Three Stories of Wild Roleplaying and Animalistic Cravings