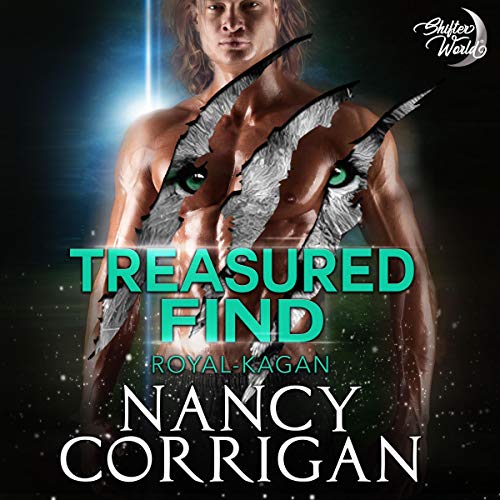 A determined shifter. A protective mother. And love...if they can survive long enough to claim their forever.

After five centuries, Rafe Alexander knows what to expect from life - boredom, broken by the occasional call from Shifter Affairs. No matter what job the shifter police department assigns him, he always accepts their plea for help. As a Royal feline shifter, he’s the strongest of his kind. And he knows firsthand the dangers of the shifter world. If there’s a chance he can save an innocent, he’ll take whatever risk is necessary.

But the task that leads him to West Virginia changes everything. A father is dead. A shifter child is missing. And the human female connected to both tragedies is hiding a secret.

Rafe's interest in Jasmine goes far beyond the case. She’s his true mate, but because of the horrors she’s seen, she doesn’t trust shifters. That won’t stop him. He'll soothe her fears. The killer targeting her family won't prevent him from claiming Jasmine either. Rafe will risk everything - including his life - to be the man she needs. Nothing keeps a shifter from his fated mate.

If you're looking for an intense yet deeply sensual and romantic shifter series that keeps you listening late into the night, you're on the right page.

Start listening to Rafe and Jasmine's story today and discover for yourself why listeners are raving about the Shifter World® where the line between love and ownership is blurred by the instincts of a predator.

What listeners say about Treasured Find

Shifter love is always the deepest love. If you love shifters, you will love this story. Can't wait to hear the rest of the series. 5*

This is a good book with action, sexy, love and humor!!! The narrator is wonderful he really brought the story to life!!! I can’t listen to a book with a bad narrator no matter how good or bad it is !!! Highly recommend!!! LMM

This book was very good. I love shifter romance and this is a good one. It has funny moments as well as sexy times. Gary Furlong did a good job with the narration. I received this free copy audiobook at my request and have voluntarily left this review.

I just have to say how happy I am that I kept searching the new releases. I absolutely love the shifter books. My favorite is The Breeds series. I remember after I finished it and kept looking for more like them.( Eventually I go back and re-read/listen to them because I haven’t found any as good) until...Now, I won’t lie I enjoy the shifter stories more that have the sexy times. I have over 1000 books in my library and it’s mixed with romance-sci-fi / Romance mostly. IMO if your gonna write a romance novel & have sexy times in it, you might as well make them good. If it’s not gonna be a super hot book, say it isn’t in the description. Okay back to this series, I loved the first one! I just finished 1st book, already downloaded 2nd, had to stop thou to make sure I let anyone else know who is looking for a new book that’s Hot & has a good story with it.. it’s not ruined by the narrator either. Look no further... lol

I love the Royal-Kagan shifter series! They each can be read as standalone novels, but they are so much *more* if read as a series. Rafe and Jazz have an instant and strong attraction, but she is hesitant to trust as she is responsible for two shifter children. As always, Nancy Corrigan tells an intriguing tale, action-packed, steamy and hard to put down. They underlying story that carries through the series always leaves me eagerly anticipating the next book.

I enjoy shifter/paranormal stories and this has some variations I haven’t read before. The hero/shifter Rafe is a twin, so not the leader of the Pride, his twin is. He however has some traits that result in his almost sharing the leadership role. He is a Royal, with 3 different cats in him..as does his brother...most of the rest singular. The story does have a conclusion, however there are a number of secondary characters who will provide more stories in this series. Action, romance, sex, villains, children, mates..mystery. This story has plenty to keep you involved and interested..esp with a narration that keeps the story moving and a voice that’s enjoyable to listen to..plus he doesn’t try hard to sound like a female which is always bad when a man tries to..he doesn’t an excellent job. I received a free audiobook for an honest and voluntary review.

This is a paranormal romance with lots of suspense thrown in. Its about a human woman who has been given the opportunity to care for two very special shifter babies. When she thinks everything is going good for them, life throws her a mate. Along with some rogue shifters out for revenge. They will stop at nothing to get her kids and destroy the only life they've ever known. This is an amazing book and I'm glad I found it!!

I love this book! It’s full of passion, adventure and great chemistry between all the characters! If your looking for s good adventure grab this book! I can’t wait until the next one!

This was a great listen. Loved the book, loved the reader. The reader can make or break a book but this one really made the story stand out! And the storyline was awesome. Love this author