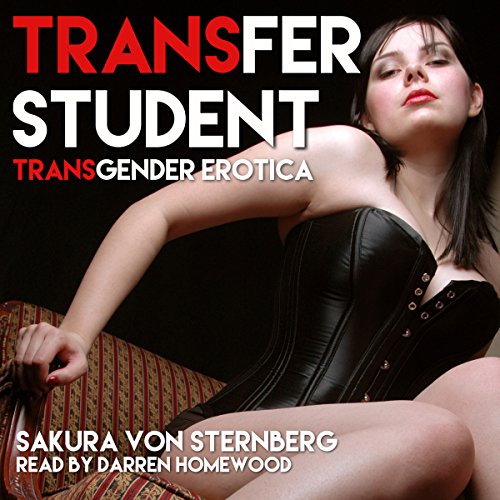 From the moment she first stumbled into Professor Williamson's creative writing class, Tomiko made herself known as someone whose brilliance was only matched by her beauty. She is a poet whose talent cannot be paralleled. A trans woman who writes frankly about her personal trials and tribulations. A confident, self-assured woman that any man would fall in love with. She quickly becomes a rising star within the university's English department.

But Professor Williamson is old fashioned. He doesn't have affairs with students. Even after she graduates, he still cannot bring himself to take their relationship to the next level.

But Tomiko's determined to change all of that. After a little wine and some light flirting, she makes her first move...which leads to a little toe-curling, hair-tugging fun for everyone!

I really enjoyed this short novel. The narration was brilliantly done and the book was well written. Will check out more from this author and narrator

What made the experience of listening to Transfer Student the most enjoyable?

I think the narration was spot on, and it was a good short, sweet romantic erotica with just the right balance of sexy times, and background so that you can really get invested in the characters.

What does Darren Homewood bring to the story that you wouldn’t experience if you just read the book?

He gives voices to the characters (obviously, that's his job!), giving them each a personality. It really helps to make the connection with the characters, which makes the experience all the more intense.

(As a side note: I wish to apologize for misquoting his name in another of my reviews as "Darren Hornwood"--I misread it, and for some reason Audible won't let me edit the review! So, I humbly apologize, sir.)

Sakura is a fantastic write. This was the last of her stories I had to read, and I can't get enough of them. She alters her style for each type--gruesome and horrific for her horror erotica, cheeky and funny for the comedic erotica, tender and sweet for this more romantic one. I also really enjoyed the positive representation of a transwoman and the gentleman simply accepting her without any reservation. Sakura does a wonderful job painting pictures with words, and Mr. Homewood did a fantastic job narrating! I cannot recommend this enough for a light, sweet, sexy hour of listening!