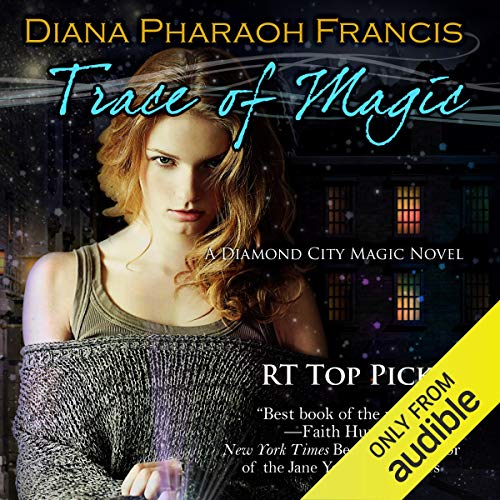 By: Diana Pharaoh Francis
Narrated by: Elizabeth Phillips
Try for £0.00

Even the most powerful tracers can't track you if the magical trace you leave behind is too old. But I can track almost anything, even dead trace. That makes me a unicorn, the Tooth Fairy, the Easter Bunny, and the Loch Ness Monster all rolled into one. In a word, I am unique. A very special snowflake. And if anyone ever finds out, I'll be dead or a slave to one of the Tyet criminal factions. Riley Hollis has quietly traced kidnapped children and quietly tipped the cops to their whereabouts one too many times. Now she's on the radar of Detective Clay Price, a cop in the pocket of a powerful magic Tyet faction. When he blackmails her into doing a dangerous trace for him, Riley will have to break every rule that keeps her safe. Or become a Tyet pawn in a deadly, magical war.

What listeners say about Trace of Magic

Not a good performance

As soon as I'm able it's going back.
it's not the story it's the reader.
the reader sounds almost preteen and has an almost whiny voice (I don't mean a full bodied red).
As if they are channeling their inner "why do I have to clean my bedroom" years.
Ruined the story I couldn't concentrate to get past chapter three.
I reverted to the kindle book.
I wish audible had a button where you could deepen a person's voice that might have worked. but 12 year old voice on a 20 something sorry but just NO!

If you could sum up Trace of Magic in three words, what would they be?

As my first experience with Diana Pharaoh Francis, I'm thrilled that she was able to take a potentially beaten-to-death premise of a magic-laced modern world and unveil a fresh new take on it.

The plot and themes of magic unfold very well throughout the story. The characters aren't just archetypal pawns, either. Francis has done a good job fleshing them out with an entire series in mind. The character development is steady and doesn't seem too forced, and I found Riley, the main character, to actually be likable. A couple of my recent listens made it impossible to care if the characters—let alone the main one—just burst into flames. This one was refreshing and fun.

Francis did a great job ending the book while keeping it open. To me, that means she trusts her readers and writing ability enough to keep a series going.

**Note: If you can't handle graphic sexual content, you can easily fast forward through it. This is an adult-oriented book, sure, but sex isn't the focal point of the story. Oh, and you might want to rethink listening if: 1) you're looking for something that redefines a genre or deconstructs societal norms or 2) you're offended by swearing, I guess.**

Everything. This is the first book I've listened to with her as the narrator. I think I'm in love. She has a nice character range, volume consistency (no inaudible whispering or surprise screeching), and an incredibly digestible voice. It was easy to imagine that Riley was the one speaking.

No. This could easily be warped into a horrible movie with a vacant, libido-driven main character thrown into action scenes, so please just read the book. The book is good.

A good adventour for those who love possiblities

If you could sum up Trace of Magic in three words, what would they be?

What other book might you compare Trace of Magic to and why?

She was excellent. I have a lot of audio books, but I love Elizabeth's performance. The men sounded like men the women sounded like woman and the story line flowed so smoothly.

So many authors cope out with a story line that is a good hook and then they provide little substance and a lot of sex. Although there is a little sex in this book, the key focus is the story line and how it plays out.

I want to wait for the other books in this series so that I can finish the whole story line. I might have to purchase the hard covers so that I can see how things are going to work in the future.

The story was typical of urban fantasy. Sexy female lead is hella good at something no one else is. She gets a male side kick who is super hot but not really an equal in whatever is going on in the book. She has a snarky best friend who tells off said male side kick for whatever and is only in the story to make sure the male stays firmly in the “not as good as the main character “ rut. Female lead almost dies to show she isn’t a Mary Sue but acts like a Mary Sue when not dying. There is romance with the male side kick that is based entirely on his looks then morphs into love because.... reasons?

Maybe I am being too critical, this book isn’t bad. It is just that I have read this same sort of book over and over again. The names of the female leads change along with their super amazing thing they do. The sexy male side kick has different hair and eyes but the same plot is there. This book is not at all different from most of the other urban fantasy out there. If you are bored and your looking for something to binge on, isn’t the worst thing you could buy.

I enjoyed the story but...

I felt like the most important thing to the main characters was figuring out if the other person really loved them. I thought the plot had more going for it than love turmoil and it kept coming up in the middle of really interesting and exciting moments. It made it hard to enjoy the action.

Best paranormal Romance since laurell K Hamilton without all the multipartner sex, Faith Hunter who is my all time favorite, Kim Harrison, and Patricia Briggs. This Author is on instant download from now on. She really is going to go far wuth this series. This book has it all. Plot was unique and I listened to it all at once. couldn't wait to find out what happened next. Riley is a tough heroine that has a good heart. Along comes our hero who is a good cop but has dealings with some bad people. reminds me a little of mafia but with magic everywhere. Most definitely credit worthy but I would have spent the money for this listen. I can not wait to see how this series grows. narration was perfect for this book and the few sex scenes were hot. like I said this book has it all. If you like paranormal romance this is your new favorite Arthur. Happy Listening.

I love the premise, the world is very interesting, hopefully next book will explain the powers/world better. The heroine was immature and whined a bit too much for me. The narrator was too young sounding, but maybe that's on purpose given the attitude of the main character? Emotions/decisions were explained too much. Then you get thrown back into the middle of whatever was going on, and it felt like days had happed when it was only seconds. Overall-just ok I guess.

I really struggled to finish this as it was very sappy and obviously was a young girl's fantasy book. I kept rolling my eyes and fast forwarding to get through the over long emotional wishy sections.

This was an unbelievably boring, repetitive and annoying book. I purchased it because a review blurb was from an author I like. Big mistake! Dealing with the narrator's pronunciation of didn’t as did-nit was mind numbing. The male lead turned into a whining baby and the female lead constantly asked silly questions every time there was a struggle. Then the story inconsistencies just compounded my misery. Advice…spend the credit on something that has actually been through a competent editor.

Excellent new series, I am looking forward to listening to book 2!! i cant wait to see Riley show what she can do!

The main character in this story is one of those annoying female characters that is always in a state of emotional turmoil. I like the story but the thoughts of the main character was just too infuriating. Every plot shift requires twenty minutes of idiocy