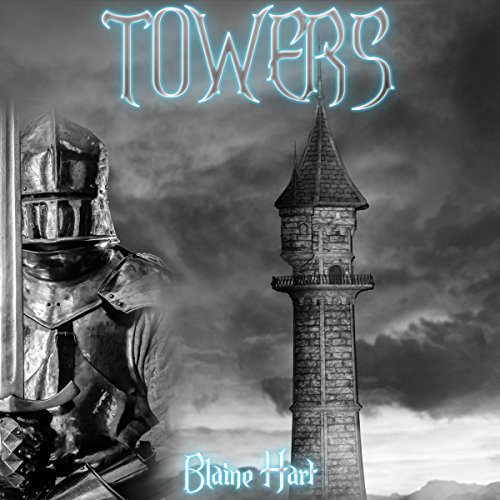 The barbarians are massing at the southern border and the king must make a risky decision.

The barbarians have destroyed the last three armies of the king and they are amassing at the southern border. The king is forced to make a risky decision and follow the advice of the ancient seer and give a skilled but young captain in the army full control of the last of his forces.

Kelyk is young and skilled; some would call him blessed. But he had no idea the horrors he would face when he accepted the task from the king.

“Towers” by Blaine Hart is an excellent fantasy short story, that discovers world full of castles, knights, wizards and witches. Hart invites us to his fantasy world to admire stunning and mysterious towers created by wizard Marianus using his magical power.
Great narrator, Jason Damron creates unique and mysterious atmosphere of the medieval time and give a real power to battlefield scene. Be ready for excited performance.
Blaine Hart have a very rich and descriptive language that makes you feel like being inside his fantasy world. We are witness of bloody and expressive battlefield, where horde of skeletons and undead barbarians invade towers, bravely defended by Kelyk and his mighty knights.
We can see massacre and glorious victory in truly passionate, vivid and well written story.
“Towers” continues tradition of “The Song of Roland” and “The Knights of the Round Table”. Be ready for great adventure, stunning scenery, ferocious fighting and magical potions. Absolutely worth to listen and discover the magical world.

The perfect story for the Game of Thrones loving generation. The world was fully immersive and creative with a gripping storyline that really kept my interest. The characters were well-rounded and likeable and I really found myself routing for Kelyk.
I would definitely recommend this to any fantasy lover.

An engaging and descriptive short story that transports you to a mysterious land that is at the verge of being overrun by barbarians. This is the story of the young and fearless Kelyk who must take charge of the King’s army and save the land from their vicious enemies. The city is surrounded and under siege by thousands and thousands of barbarian troops, Kelyk is under pressure to find a way to defeat them. A perfect book for fantasy fans.

I liked the happy and sweet ending of the story where Kelyk becomes the wealthiest man in the kingdom, gets married and has six kids.

This is an interesting fantasy story to keep your attention to throughout the listening. A huge task is presented to Kelyk on how to defend the southern border and the whole kingdom from the barbarians. Although he is very brave the challenges keep on coming. At the end, despite all the odds he becomes a hero and receives a huge acknowledgment from the king.

This is a great fantasy adventure to listen to rather than just sit and read. I like
that I can just sit back and not try to envision the voices of the characters, such as
Kelyk. The narration of it by Jason Damron, as well as the descriptive writing by Blaine Hart, is so good that I can just close my eyes and imagine everything that's going on and what Kelyk is facing on his task for the king.

A real "page-turner" of an audio book. I enjoyed listening to Towers; the story moved along at a decent clip and I enjoyed the surprises that popped up around various twists and turns of plot. For a moderate-length book, it's pretty interesting, and it left enough hanging at the end that I suspect sequels will follow.

The Towers book is a great book if you are into fantasy type of reading. I enjoyed it a lot and would purchase more if they make a series of them. It had a lot of good detail in the story and it was well written overall.

This fantasy short story is full of wonder and excitement! The characters are incredibly developed, paving the way for a journey full of suspense and action. Kelyk's journey is one that is full of obstacles, but Hart manages to captivate the audience by showing us what it really means to be a captain working for a king. This is a must read for anyone who wants action and a well-written plot.

This adventure story will keep you on edge till the very end! Really enjoyed the narrator who pulls into the story right from the start. I only wish it was longer!

Would you consider the audio edition of Towers to be better than the print version?

I would consider them to be the same.

Kelyk was my favorite character because he was faced with many challenges throughout the story. Although they were very different circumstances than any other human would face, they were such challenges that brought about emotion that any person would face. It made him very relateable.

In the beginning of the book, when Kelyk thinks back to his childhood. That particularly moved me because we seldom realize how our childhoods have a profound affect on us as we get older. Once again, it made Kelyk a very relateable character!

I was drawn into the fantasy story "Towers" from the start, and it held my attention throughout! It had everything you would hope for in this type of story . . . the young, brave commander; the older, wiser general; a wizard; a witch; brave troops. As Kellig, the young commander, leads his troops into a situation where they are clearly outmanned, Kellig uses his smarts to devise a strategy that you can only hope will pan out. Not only does it work, but the victory is used to inspire a nation, its people and, most surprisingly, the very people who had once been considered the enemy. "Towers" is a terrific book which I highly recommend!

Towers Is a Great Short Work of Fantasy

Where does Towers rank among all the audiobooks you’ve listened to so far?

I absolutely enjoyed reading "Towers" by Blaine Hart. This short story has all of the elements of a great fantasy book. It is exciting, magical, and mystical. It is one of Blaine Hart's best works.

What other book might you compare Towers to and why?

If I was to compare "Towers" to another book, I would choose "A Bard's Tale." The reason I would choose it is because "A Bard's Tale" is another short story fantasy that offers the same magic. When I say this, I think of the fairy "Azore Frostyhill," and compare her to the witch, "Crowlyn." I compare these two because they both possess the magical wisdom to beat their enemies.

What does Jason Damron bring to the story that you wouldn’t experience if you just read the book?

The part of the book that moved me was at the end when Kelyk's life was described, "he eventually found the woman of his dreams, and married her. Fifteen years after the attack he was wealthy, and had six children. He made peace with the Barbarians. Kelyk lived happily ever after, having made the world a much better place. His people open up to the Age of Enlightenment" a ten year reign of peace, happiness, prosperity, and love across the whole world." I still get goose bumps from that part of the book.