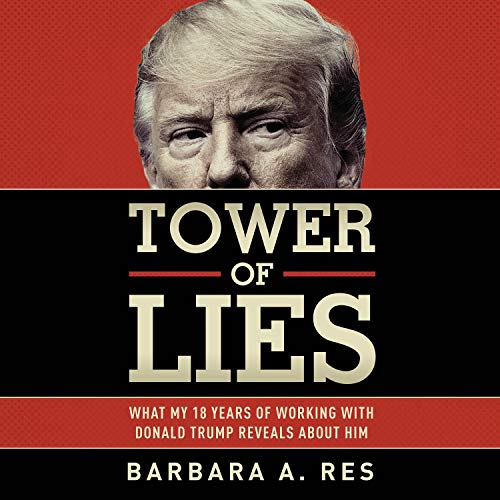 Barbara A. Res worked directly with Donald Trump for 18 years on some of his biggest projects and had nearly unlimited access to him. Trump selected Res to be in charge of construction of Trump Tower, his greatest success as a developer. In this insider’s look at how the ambitious real estate developer became the most divisive president in recent US history, Res takes us into closed-door meetings, boardrooms, limo rides, and helicopter flights to really understand what makes him tick and show us why his claim to be a great dealmaker and savvy businessman is just a mirage.

No one with this kind of access to Trump during his formative years as a developer has ever written so completely about who he is away from the cameras. It’s no wonder that when the media are looking for someone who really understands Trump, they turn to Res. Candid, personal, and deeply perceptive, Res shines new light on the man whose depravity has put us all - and democracy itself - in danger.

What listeners say about Tower of Lies

The truth about Trump

This is a must read for any Trump Supporter. This tells the truth about how he conduct himself against others.

A book that needs to be heard.

Excellent book well read and feels so Trump. Nasty nasty man in everything he did.

Best book about The US 45th president’s personality

I read most of the books written about Trump in past 4 years and this one really delves into the person he is.
To be fair this book confirms what we all have seen a daily basis.
Well written and easy to follow. Well done to the author.

Confirm what I believed

Probably even more than family, this relationship is an illuminating view inside the hole where a soul should be. It should be required reading, so that this personality type is never again elected to lead this country.

I will write a more thorough review later, but right now I want to share this ASAP on my Facebook page. I’ve read several Trump “tell all” books recently. This, and Michael Cohen’s book, Disloyal: A Memoir, are two of the best and most important. I have several dear friends and family members who are Trump supporters. This book helps me understand them (and Trump) in new and important ways. I have more insight, compassion and less anger. I’m also very grateful that people who know him have been brave enough to write their stories. I highly recommend this book. More later...

No doubt Ms. Res knew DJT was a wart on the nose of society!
I only wish the world could have know earlier and saved us all from his wickedness.

As a retired psychotherapist, I found this book incredibly insightful. Barbara Res held my attention in every chapter. I didn’t want the book to end. She beautifully described D.T.’s mood swings, his character, or lack of it, his revengeful nature, his fears. They are the same today. Like Barbara, I feel for Ivana. (And also for Marla and Melania.) I also have compassion for anyone who has ever been fired by him or stiffed by him! Thank you Barbara for the gift of your journey with Donald Trump as his Construction Engineer and VP.

I believe I understood Trump from the first, due to my own experience with others. I assume millions could also see his lack of and disdain for knowledge on virtually any topic that pertains to the presidency. I've tried other well-known books about Trump and I'll be going back to 2 or 3 of the best to try them again, but what I wanted most in my own debate toolshed were firsthand & easily relatable examples of how Trump truly views & treats the average working person. This book filled my requirement. I thought the author sometimes seemed a bit too exhuberant in assessing herself, but frankly she earned it so why not have & state pride in that - and she also takes frequent opportunities to direct credit elsewhere. But either way the focus is clearly about Trump, and more credible because she's objective to his credit when it is infrequently fitting to his real estate work.

More proof 45 is unqualified to be President

Yet more credible evidence that 45 is amoral, unethical, untrustworthy worthy, incompetent and down right unfit to be president of these United States.

Mrs. Res has a lot of information and a great perspective to share. However, the narration is so “sing-song” that it distracts measurably from the listener’s ability to absorb that information.

I am replacing my audio version of this book with the actual book.

Very detailed and informative. Excellent writing by any standard. You really can't listen to this story without profound tlfeelings of sadness.

Please read or listen to the words of Barbara Res. What an amazing book this was. There are so many things she talked about that the public had no idea of. Bravo Barbara!!

A must read book!

All you need to know about the narcissistic commander and chief that tried to destroy the American democracy.