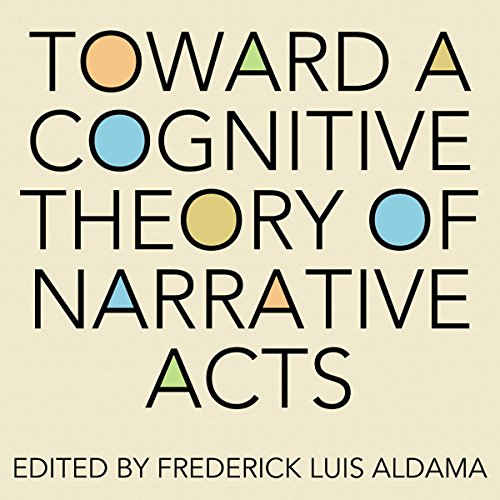 Toward a Cognitive Theory of Narrative Acts

Each of the essays shows in a systematic, clear, and precise way how music, art, literature, and film work in and of themselves and also how they are interconnected. Finally, while each of the essays is unique in style and methodological approach, together they show the way toward a unified knowledge of artistic creativity.

“This exciting collection attests to the range and sophistication of current cognitive-evolutionary studies in narrative. Exploring the relation between narrative and topics including empathy, dream, torture and ethics, theory of mind, and emotional change, each essay demonstrates a thorough knowledge of the secondary discipline it brings to bear on narrative art." (Nancy Easterlin, University of New Orleans)
"Focused on the universal human capacity for narrative, Frederick Aldama's Toward a Cognitive Theory of Narrative Acts boldly stakes out a common space of knowledge at the intersection of the natural and social sciences and the humanities. The essays by leading cognitive critics provide important insights into the motivations and workings of narrative from Aristotle to contemporary film." (Mary Thomas Crane, Boston College)

What listeners say about Toward a Cognitive Theory of Narrative Acts

i was fascinated by the concept of this book, and wanted badly to enjoy it. i persevered for as long as i could, but the robotic narrator is impossible for me to listen to - it sounds like it's being narrated by a computer programme. i also found the material in one of the essays objectionable, as the author took a very reductive and antiquated approach to autism spectrum disorders, which really put me off.

loved it! it is a scintillating, thought provoking and at times cautious approach to the analysis and review of cognitive approaches to narrative acts. Very easy to follow. I highly recommend.

This book may be interesting - but the reading is completely awful. The narrator clearly has no understanding of the material and - as a consequence - intones the text with flatly, emphasising words incorrectly and mechanistically. An absolute waste of money and time.

Interesting for people interested in narratives. I come from a psychology (and arts) perspective and it lacked a little for me, but some useful parts and I added a few bookmarks.
The narrator had a lovely voice, however I wasn’t convinced by all of the pronunciation and the emphasis meant that the meaning didn’t always come across clearly. It was a little robotic which didn’t work for me, however the pace was good.

If you could sum up Toward a Cognitive Theory of Narrative Acts in three words, what would they be?

Lots of really excellent essays in this collection. I like Suzanne Keen's essay, that is the one I am listing to now. Lisa Zunshine and Patrick Colm Hogan have good chapters also. The whole book is good.

I am a PhD student in English Literature. I specialize in cognitive narratology so I was really happy to see an audiobook on the subject. Looking at literature and narrative from the perspective of cognitive science is the next big wave. Lots of A-list universities are focusing more and more on this perspective -- Harvard has put out several dissertations lately that take a cognitive approach to literature. Much more to follow.

This is a challenging title and it would definitely help your comprehension if you already knew a little about narratology and cog-sci. I love it. I have listened to it once and I am listening to it a second time. I would very much like to encourage publishers to produce more of this kind of literature in audio format.

Who would you have cast as narrator instead of Kellie Fitzgerald?

It needs someone sharp and jolting to keep the stimulation up. A voice like Martin Scorcese or anyone invigorating would be an improvement.

Fantastic work. Chapters are way too long, and there are huge swaths of quotes from other books/sources which delay the point(s) of the author.

The reader is not appropriate for this collection

This is a collection of essays on cognitive science intersecting with the arts and literature. The narrator or reader must have been told this was a romance novel because she speaks about brain synapses and firing neurons in such a way that I envision some dainty maids bust bursting from her bodice while Fabio steals her away behind a barn.

However, oddly, the recording sounded like a robot with pitches jumping and falling between words as though the words or sounds had been strung together after a pre-recording of individual monemes.

Frankly, I couldn't follow the papers and had to give up entirely on this book.

I'm sure the reader does a fine job with literature but this ain't literature.
I am very used to listening to people who write these sorts of articles, chapters, or papers read their work aloud. It is normal practice to read and listen to such things. I don't have problems when I'm at conferences but could not understand a lot of what was being said here.

The Narrative isn't interpreting the Prose

What would have made Toward a Cognitive Theory of Narrative Acts better?

The woman's inflections are not appropriate to the material -- she is trying to sell it -- the text but it's not oratory or narrative, it's discourse, and her interpretation is more appropriate to one of plato's dialogues. it's very hard to listen to, since logically many of the statements are either shallow or unproven in terms of their characterization of the hard sciences. she should be reading children's books.

Would you ever listen to anything by Frederick Luis Aldama (editor) again?

this is not the best question. the purpose of the anthology of essays is to assert that the study of the english canon (and comic books) has relevance in the 21st century -- which is a big stretch. i was an english major and hold a masters in fine arts and a masters in computer science. so i feel competent to assess the assertions of the essays, but the reading by the woman obscures meaning for emotion ... i want wring her neck.

Would you be willing to try another one of Kellie Fitzgerald’s performances?

not if she is reading non-fiction. she would be good for jane austen.

What character would you cut from Toward a Cognitive Theory of Narrative Acts?

this is not fiction. the addition of rating the story, if i were writing the software, would check to see if the text was narrative or not before generating these components of the window -- it's not hard to do. it just requires thinking about the context of its use. this probably sounded to someone like a real social network kind of question -- What if we removed Ophelia from Hamlet? etc. fine. but the person in charge of putting this up should have realized that this is all incorrectly tilted towards fiction when the whole point of software is to be able to dynamically specialize to the user's personal choices.

a university of texas publication is not mainstream academic but i'm interested to see what english doctorates are doing with their education -- so, this book addresses that. but without assigning a reader that can better pitch that, the book becomes almost unlistenable. i don't know how these author/reader pairings get done, but there should be some critical judgement shown. i suppose getting anyone to actually read this book was difficult given the obviously small audience. but as someone once said about one of my efforts, if you can't provide the full functionality, then it's probably better not to let it out at all: you can't give a warm-hearted emotional reading to academic essays -- particularly in a field that is suspect for producing shallow misapplications of hard science in the absence of measurable content. why should a university pay someone to assert that comic books represent human knowledge. And then to sing-song that with a womanly warmth and secret smile -- give me a break. this is exactly why i left the humanities:

a rabbit hole of intellectual self-gratification

the only thing interesting about this was the charisma with which it was presented. the content itself was designed more to use big words and show off how many famous philosophers and writers the author is familiar with than it was to make a point of any type.

premises made were quickly abandoned as the author strove rather to cover every subject under the sun instead of making a God damn point about anything.

I couldn't get past the first chapter as there is only so much time one can devote to hearing someone perform the oratory equivalent of stroking themselves off.

can't get my time back.

The narrator is reading this book as if it were a novel. Putting emphasis on words to try and convey interests. I’m not convinced to the narrator even knows what she is reading. It is very distracting from the intellectual content of the book.

She says this word so much. It is driving me insane. There's like a whole section on it and she says it incorrectly every single time. Tons of mispronunciations frankly, but this one shines as particularly annoying. Also the essays are mostly just rambling analyses that can't seem to find their thesis. Great example of what's wrong with cognitive narratology in the modern era.