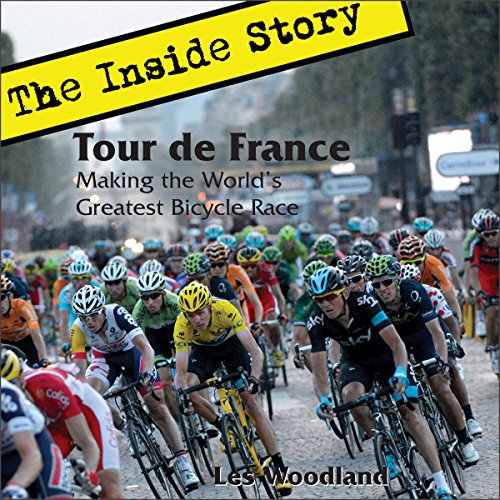 Tour de France: The Inside Story

The Tour de France is the greatest bike race in the world, but it began as a humble promotional gimmick for a floundering newspaper. More than 100 years later, the Tour still captivates the world and is broadcast to over 180 countries.

How did a few men looking for some way to save their struggling business become masters of a giant, successful enterprise? Les Woodland tells the inside story of the Tour de France through the prism of the men who started it, and those who now run it. As he explores the creation and evolution of the Tour, he never runs out of those fascinating illustrative tales that make his books impossible to put down. This work was originally published in a slightly altered form in 2009 as Tourmen: The Men Who Made the Tour de France. It has been updated to reflect the events that have happened since the original publication.

What listeners say about Tour de France: The Inside Story

Good but really only for cyclists.

A bit list like and the reading is a little stilted. I did enjoy it but listened in chunks every couple of months. I think it's really only for hardened cyclists not for casual interest. Having listened once I wouldn't again.

The voice actor reads all the quotes from French speaking people in this book with a false French accent.

Not really. The only reason I kept on with it was because I love cycling.

I wanted to hear the subject matter, the history of the TdF.

Who would you have cast as narrator instead of Oscar Sparrow?

OMG my Aunt Helen probably could have done a better job. The narration was the worst part. His affected French and American accents were painful to hear and his British English was so choppy in tempo that it just didn't flow like natural speech.

Did Tour de France: The Inside Story inspire you to do anything?

It inspired me to leave this review as a warning to others.

This could have been a much better audio book with better narration. Really. The next time you want someone to speak English with a genuine French accent, get a Frenchman who speaks English. Please.

Thoroughly enjoyed this book. Well written. and full of fascinating facts. The voice and accents are fantastic.

I did not like the reader. Too distracting as he attempted a French accent. I may opt to purchase the book instead of having it read to me.