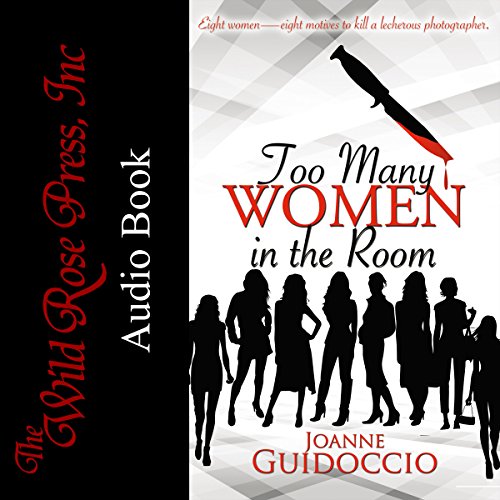 Too Many Women in the Room

By: Joanne Guidoccio
Narrated by: Tamara Eastridge
Try for £0.00

When Gilda Greco invites her closest friends to a VIP dinner, she plans to share David Korba’s signature dishes and launch their joint venture - Xenia, an innovative Greek restaurant near Sudbury, Ontario.

Unbeknownst to Gilda, David has also invited Michael Taylor, a lecherous photographer who has throughout the past three decades managed to annoy all the women in the room. One woman follows Michael to a deserted field for his midnight run and stabs him in the jugular.

Gilda’s life is awash with complications as she wrestles with a certain detective’s commitment issues and growing doubts about her risky investment in Xenia. Frustrated, Gilda launches her own investigation and uncovers decades-old secrets and resentments that have festered until they explode into untimely death. Can Gilda outwit a killer bent on killing again?

What listeners say about Too Many Women in the Room

This is a well crafted story with an interesting group of characters.

The problem is the Audio is not a good quality so it makes the Narrator appear worse then she sounds on the Audio Book.

The Audio needs to be done again if the quality of the sound improves I will review it again.

I really liked this book -- while I agree that the audio quality wasn't 100%, I still really liked it and enjoyed both the story and the narration. LOVE GILDA! I'd definitely like to listen to more in the series, and I'd recommend it for a good, fun murder mystery. Might make ya hungry tho! ;)
I was given this free review copy audiobook at my request and have voluntarily left this review.

too many women is right

There are a lot of sub stories going on in this story. All women. Plots, by-lines, and settings. There is definitely a killer in the midst because people keep dying and being murdered. Overarching question is why and by who. The novel weaves through the various women, and attempts to determine who holds the key to murder.

I really enjoyed this book and felt as even though I had not read book 1 in the series, the author quickly got you up to speed with a this new mystery, and touched based on Gilda Greco's previous encounter with the deceased. This mystery is packed full of death, Italian curses and good luck charms, a lottery winner (so money), and food.....so what is not to love? After listening to this, I now need to go and listen to book 1, as I like the style of this author.

The narrator did a fantastic job with all of the character voices and you could distinctly tell who was "speaking" during the book. Good Job! I have not listened to any of your narration work previously, but love how you bring life to each character, which I am sure is just what the author was looking for.

I really liked this book, especially the main character Gilda. She's caring, intelligent, and wants to help others with her resources. However, the narration was very hard to listen to. The voices did not sound like grown, mature women. The emotion and inflection didn't match the topics being discussed.

Narrator was not appropriate for this listen

I listened to the first book in the Gilda Greco series and enjoyed it very much. I was thrilled when I saw the second book was available. So thrilled that I did not check the narrator. I never occurred to me that there would be a difference. From the first word, I knew something was wrong. I checked and sure enough, a different narrator.

There is nothing wrong with Eastridge's voice. In fact, with a different book, she would have been quite pleasant. However, Gilda Greco is 52 and Eastridge - though pleasant - comes across like she should be studying for a history final with Archie and Veronica. It was disconcerting.

I tried to stay with the listen because I knew the quality of the writing would still be there since book one was so good. I couldn't do it. There was a point in chapter two where all of these 50 something women got together but to hear the bevy of those voices come across as high-pitched and whiney was just too much.

There are very few books with a 50+ year old heroine. This character deserved to be expressed as such.