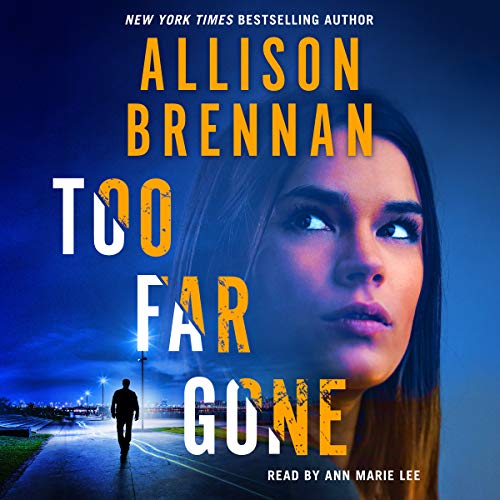 Too Far Gone by Allison Brennan is a thrilling audiobook that will leave listeners breathless.

When a man who appears mentally unstable holds a group of people hostage and dies in a shootout with the FBI, Special Agent Lucy Kincaid is assigned to investigate what happened.

Up until two months ago, McMahon was a respected scientist - then his wife left him, he lost his job, and he was arrested for assaulting a former colleague. The one person who might have answers - his research assistant - has disappeared.

While Lucy is investigating this bizarre case, her husband, Sean, is on top of the world: His son, Jesse, is visiting for the summer. They are having a blast, until someone follows them. Sean is positive the surveillance is connected to Jesse’s stepfather - a man who had once laundered money for a violent drug cartel. But when Lucy and Jesse are run off the road, they begin to wonder if the attack is connected to Jesse...or Lucy’s current case.

Nothing is what it seems - neither the McMahon investigation nor the car accident. As Sean and Lucy dig deep into the lives of everyone involved, one thing becomes clear: If they don’t find the truth fast, everyone they care about is in danger.

Once Again, the Narrator...

The book has a good story. It has some interesting twists...I've always liked Allison Brennan. But the narrator is so annoying, I may have to delete the audiobook and read it on my Kindle. The narrator sounds like she's reading to a toddler...dramatically, emoting, a sob in every note. I find myself groaning and rolling my eyes, and having to turn it off. The narrator could be good. She just needs to stop the drama! Do authors listen to their books? They really should.

Update: I had to stop listening. The narrator ruined the book. I've read the other review that's aired since I wrote mine. I agree that it's a good book. But I'll finish it on my Kindle.

Lucy and Sean can do no wrong. every single novels is just as heart stopping as the one before it. I absolutely love this series and often read the books twice to see if I can find the clues early the second time through.

I have loved this series and have read the books as well as listened to them in audible books. I love how the author pulls u in and keeps u there till the end.

This series is one of the best. The characters begin to feel like old friends. Its not so much the twists and turns that keep you listening, but rather the way these two families come together to make sure the crime is solved and justice is served - by whatever means necessary.

Allison Brennan has done it again! An edge of your seat, can't stop listening to end of the story.
The amazing on going investigation that Lucy is involed in as an F.B.I. Agent of 18 months, the terror, the suspense, the threats of safety is ever ongoing till the very end!
Absolutely amazing and the end, well that is amazing too.
The audio narration was superb!
Highly recommended series and very well written.
The suspense and police procedures were truly enjoyable!
10+ Stars!!!!

Sean's hysterionics are way over the top, other than that the story is very good.

I love listing to these Lucy Kincaid books. They are so well done and narrator was great!
Ready for next book. 😂

Too much "lovey dovie". Doesn't go well with the action in the book. Try again. Thanks.