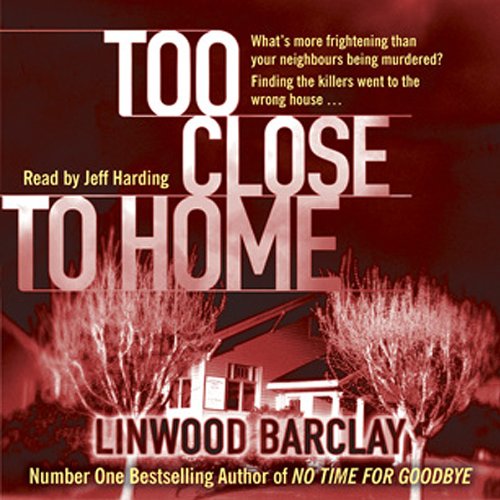 Too Close to Home

By: Linwood Barclay
Narrated by: Jeff Harding
Try for £0.00

When the Cutter family's next-door-neighbours, the Langleys, are gunned down in their house one hot August night, the Cutters' world is turned upside down. That violent death should have come so close to them is shocking enough in suburban Promise Falls, but at least the Cutters can console themselves with the thought that lightning is unlikely to strike twice in the same place. Unless, of course, the killers went to the wrong house...

To find out who killed the Langleys and why, everybody's secrets are going to have to come out. But the final secret - the secret that could save them or destroy them - is in the one place nobody would ever think of looking...

What listeners say about Too Close to Home

Well written and narrated I have read a few of the authors book and each one just as good as other and I intend to read more of his work.
Very enjoyable book

Easy to listen to, although annoying at times

Would you try another book written by Linwood Barclay or narrated by Jeff Harding?

This is the first Linwood Barclay I have tried, but would try another one. His story despite many red herrings is telescopically obvious which makes it an easy read.

The boy who wrote the original story, around which much of the book was centred. He seemed genuine and truthful, unlike many of the other characters. Although the main character also seemed a decent chap, but seemed like a bit of a fool though for surrounding himself with liars and cheats

He has a macho swagger to his voice which irked me.
Even when the main character's life and family were at risk, the reader delivered it with a cocky confidence which made the main character seem cold and unsympathetic

Did Too Close to Home inspire you to do anything?