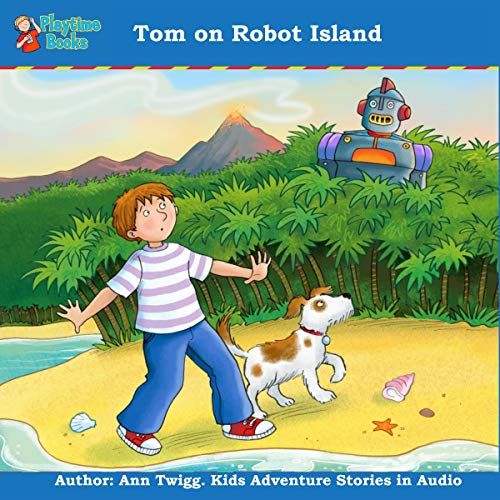 This fantastic story will have children so caught up that their imaginations will work overtime picturing a little boy who is swept away by a huge wave and who finds himself on Robot Island.

This audio story is the first in a two-part series written and narrated by Ann Twigg. The inspiration for this story came from her Grandson Tom, who was fascinated by robots.

All children love action stories and this tale is brimming with it. When Tom is washed up onto a desert island, he thinks he is alone. However, he soon discovers that robots live on this island. Initially he’s very frightened, but his fear soon turns into excitement as the robots seem pleased to see him. Tom soon realizes that the robots want to be his friend and are determined to help him escape the island and return home.

The Robots on the island do lots of funny things, which make Tom laugh. Children listening to these adventure books will also find them delightful because of the comical actions of the robot characters.

While many children might struggle to read books, audio books offer easy entrance into a new world at any time of the day. This audiobook is captivating and brilliantly narrated by Ann, who will have young children wanting to listen again and again.

Add this title to your cart now...

What listeners say about Tom on Robot Island: Adventure Stories for Kids by Playtime Books

My daughter was initially a little bit frightened but soon got sucked in to the story, and asked for the next installment

Got this for my 8 year old daughter and we enjoyed listening to it together. She isnt the most confident in new situations but she said at the end your next best friend is someone you haven't met yet.

Tom and his dog Patch are at the beach with his Mum when they are swept away by a huge wave and find themselves on a magical island inhabited by robots! Tom is very frightened at first but soon learns that robots can be very friendly. An imaginative, exciting story about the power of friendship.

My little girl isnt a massive fan of robots usually but she did enjoy this story. We listened to this in the car on a journey and it kept both of my girls attention for the drive. We listened at speed 1.5 as we found it a better pace. I guess it would be more soothing at bedtime if done on 1x speed.

I listened to this story whilst I was ironing and the kids were dropping off to sleep, good story for bedtime or any time in fact x

Ideal for reluctant readers to help develop creative and curious minds. This short story helps teach children the dangers of the sea and yet creates a thirst for adventure. It reminds us that we all appreciate our holidays and may not want them to end until we realise quite how much we appreciate our families and homes.

Tom is a confident brave character but he also openly admits his fears but courageously perseveres.

Without spoiling Tom’s secret adventure, the plot is in the title and Tom and the Robots successfully depend and appreciate one another.

A great holiday read, ideal for journeys or even as a class or bedtime read.

The plot based on ‘an Island’ is versatile so could lead to varied stories to develop each child’s writing and imaginations.

We enjoyed listening to the soothing narrative. Thanks!

A fabulous story about Robots

I listened to this book alongside my 7 year old son who absolutely loves Robots. He has listened to it twice now and I am sure he will be listening again. He loves this story.

I love it how Ann Twigg is a versatile genius. What a great imagination he has. This audiobook was a killer. You guys will enjoy it! Thanks again for another great audiobook!

This story is so much cute and fantastic among the children. Nothing is so much interesting as it. Even, me who is 32 years old find a lot of fun.

Kids love adventure. They will found out adventure from this audiobook. Also they will be satisfied by the audiobook. Highly recommended.

This is the beauty by Ann Twigg. I listened many audiobooks which are written by Ann Twigg and find out that he has a great talent. The talent is he can easily capture the children’s attention by his audiobooks. Because of his audiobooks based on children’s dream, adventure and so on.
'Tom on Robot Island: Adventure Stories for Kids by Playtime Books' is one of them.

Kids love adventure. This audiobook completely based on adventure and kids love it very much. After listening this audiobook my child is dreaming that he will go to a tour with his pet. He will play with a self-made robot. So that, he try to make a robot with lego pieces. Please to see that scene.

A adventure story for kids

Easy to listen to young children and keep their attention engaged. Great way to introduce how fun exploring the outdoors can be.

The audiobook encourages kids to explore the outdoors, which is a huge plus. We’re waiting for more adventures.

Love that it features a multi-racial family!

A wonderful audiobook! I love that this feature. This audiobook makes a great bedtime story!

Tom on robot island is a wonderful way to get kids into the great outdoors. The loving family and beautiful drawings make a walk in the woods seem like the most amazing day ever.