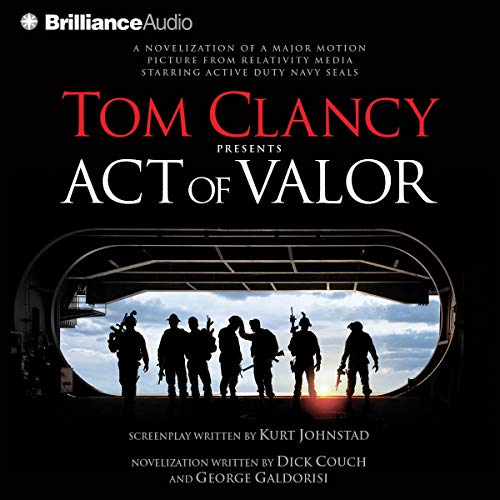 By: Dick Couch,George Galdorisi
Narrated by: Steven Weber
Try for £0.00

Act of Valor stars a group of active-duty Navy SEALs in a powerful story of contemporary global anti-terrorism. Inspired by true events, the story combines stunning combat sequences, up-to-the minute battlefield technology and heart-pumping emotion for the ultimate action adventure. Act of Valor takes listeners deep into the secretive world of the most elite, highly trained group of warriors in the modern world.

When the rescue of a kidnapped CIA operative leads to the discovery of a deadly terrorist plot against the U.S., a team of SEALs is dispatched on a worldwide manhunt. As the valiant men of Bandito Platoon race to stop a coordinated attack that could kill and wound thousands of American civilians, they must balance their commitment to country, team and their families back home. Each time they accomplish their mission, a new piece of intelligence reveals another shocking twist to the deadly terror plot, which stretches from Chechnya to the Philippines and from Ukraine to Somalia. The widening operation sends the SEALs across the globe as they track the terrorist ring to the U.S.-Mexico border, where they engage in an epic firefight with an outcome that has potentially unimaginable consequences for the future of America.

What listeners say about Tom Clancy Presents: Act of Valor

You can see the story as it developes.

Would you listen to Tom Clancy Presents: Act of Valor again? Why?

Yes - to again listen and pick up on areas I may have missed. I listened
in the car, and had to turn it off and on as we made the trip.

What did you love best about Tom Clancy Presents: Act of Valor?

a true look at what our hero.s really go through

a great read you must finish this one. to read/hear what our hero.s really go through