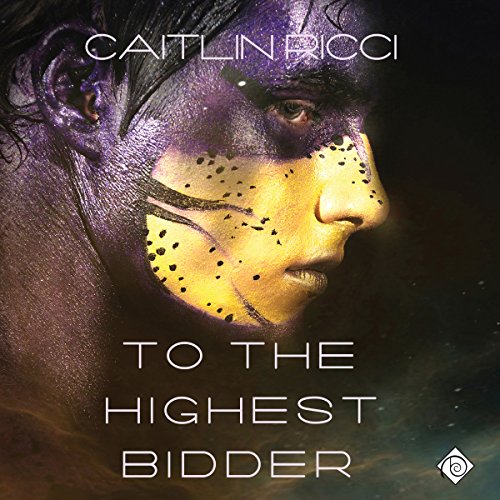 To the Highest Bidder

By: Caitlin Ricci
Narrated by: Jean Samson
Try for £0.00

The Intergalactic Star Pilot Academy has accepted Thierry Leroux into the elite class of sky year 2231. But the academy comes with a hefty price tag, and there's no way he, a poor Sythe orphan, has the credits the academy requires. Thierry's brother, Corbin, a high-class companion, suggests Thierry sell his virginity for the cost of tuition. It seems like a ridiculous idea, but it may be Thierry's only shot, so Thierry asks Corbin to arrange a meeting on the pleasure planet of Wish.

On Wish, Thierry meets Corbin's boss, Monroe, and they agree to auction off Thierry's virginity. Thierry is grateful to the masked buyer he knows only as "Dragonfly", and Dragonfly is gentle, making Thierry's first time a good memory. When Dragonfly requests to see him again, and pay for the pleasure, Thierry returns to Wish. But in this game, falling in love is dangerous for the heart, and Thierry might not like the man behind the mask.

What listeners say about To the Highest Bidder

I listened to the first 60% with a huge smile on my face just really enjoying the story.

Corbin, Thierry’s older brother, is a high-class companion who suggests that Thierry sell the only thing he has of value – his virginity – in order to pay for the tuition to an elite Pilot Academy. Thierry has only ever wanted to pilot a spacecraft and agrees, reluctantly, that selling his virginity to the highest bidder is the only way he’ll ever afford to do it.

Corbin approaches the owner of the brothel he works, Monroe, about auctioning his brother’s virginity. A virgin is incentive enough, but because Thierry is also a Sythe, who are highly reactive to another’s touch leaving their lovers fulfilled and pleased beyond measure, Monroe believes Thierry will bring in even more credits than he needs. Monroe agrees to the auction, taking a 25% cut of the profits.

The auction goes extremely well, with the winner bidder requiring complete anonymity. The winner wears a mask, with only his mouth uncovered, and doesn’t speak during their encounter. Thierry calls the man “Dragonfly” based on a tattoo the man has on his torso. The night is very special, with Dragonfly being a perfect lover for Thierry.

Dragonfly requests through Monroe, after their encounter, to keep in touch via letters with Thierry for an additional $1,000 credits per month. Thierry goes off to school and he and Dragonfly communicate back and forth. Eventually Dragonfly asks to see Thierry again for an additional $5,000, and Thierry eagerly agrees, not because of the money, but because he’s fallen in love with Dragonfly. Thierry’s enormously happy when Dragonfly admits he too has fallen in love with Thierry.

So, yeah – super fluffy, romantic, and hot. I’m swimming right along, enjoying the story thoroughly, big smile on my face and then BAM!

Oh. My. God. I did not see that coming. I mean, part of it I did, I totally called part of it, but the other part?

Nope, I did not see it coming – and it BROKE MY HEART. Though it all works out, I was devastated and never quite regained my equilibrium with the story. So, yeah…fluffangsty. Then the story goes on…and yes, I could see why it was necessary for what happens next what with the 23 years age difference between them. I could see why it was all necessary and it made a sort of sense – but my heart didn’t want it. My heart wanted a different path.

It’s my first audiobook with Jean Samson as the narrator, and, I think, his first as well. Though he brings emotion to the story, and I enjoyed the narration on the whole, he does have a few pacing issues and a couple of flubs, one memorable time even calling Dragonfly “Firefly”. Though, for a first time narration attempt it wasn’t bad and I’d certainly give him another go in the future.

All in all be prepared to be enjoying flufftastic sweetness followed by a huge shock and just go along for the ride. Don’t worry, there’s an HEA waiting in the end for you.

I know one other thing – I’m looking forward to checking out book two, Fantasy for a Gentleman!

Good, but ending ruined it...

This was a great m/m romance. The story was progressing nicely... It was pretty obvious who the secret lover was... but the time skip at the end... seriously... like 20 years... c'mon now... Totally ruined it...

Still worth a listen... great sale book... maybe a buy if the price goes down... I wouldn't spend a credit though...

Liked it but seemed like in a Rush to end

The concept of the story was good and i overall enjoyed the story. I was a little sad that the relationship kind of get stuck in the same rut all the time and does not Seem to develop much and Then suddenly the solution in the last five minuts and a time leap that kinds of glosses over like ten years or so. I Think the author could have done more with her idea because she really had something there, but didnt really followed through and committed to writting the story i full. To bad, so that is the Reason for the mediocore review. Nothing wrong with the narrator

To the Highest Bidder is intriguing, entertaining, and heartwarming. The narration is not bad, but I find it a bit awkward at times, which detracts from the story. If I was reviewing the text version I would rate it at 4 stars instead of 3.5.

This story is unique and immediately engaging. Thierry's infatuation with his mystery lover is endearing. But I'm glad things come back down to earth, or it could have become silly. As it is, the mystery romance becomes a tool that reveals interesting elements of their personalities.

The characters in this story are well developed, and the romance is a sexy and bitter-sweet journey.

Overall, I enjoyed this story, and I'm looking forward to the next one. I did feel, however, that some parts did drag a little making the story feel a bit padded.

I recommend this book to someone looking for a unique Sci-Fi romance and coming of age story.

*I received a free copy of this audiobook to read for Inked Rainbow Reads in exchange for an honest review.*

I liked this relatively cute romance. Thierry was naïve yet so likable and endearing. And Monroe for all his harsh words and actions was just as likable and actually became the character I wanted to know the most about.

The way these men initially got together was easy and adorable even if it was rushed. I got over the fact that this really was a first sex equals true love type story because it became more than that for me when I connected to both men. I mean I could totally see the ending coming a mile away, but I didn’t care because it fit well with the overall storyline and tone. It worked for me.

I was rather annoyed with the angst introduced towards the end. I didn’t like what Monroe or Thierry did because it pushed my personal pet peeve buttons. And for a while I was concerned things would not end how I wanted, but the author brought it all back to a happy place and left me feeling warm and fuzzy. Though still a bit annoyed at how short and rushed the epilogue was.

Even with the bit of annoyance, I liked this book and can’t wait for the next one. I want to know more about Corbin and his outlook on being a sex worker. His viewpoint is not the norm and I like that about him. I would also love to see more Monroe and Thierry and what their future is like.

This was my first experience with Jean Samson as a narrator and I enjoyed my listening experience. He brought out the best in this story and the characters. Sometimes Corbin felt a bit too laid back but other than that the emotions were well displayed. I will gladly listen to him again.

If you could sum up To the Highest Bidder in three words, what would they be?

I really enjoyed the main characters even the brother was very well fleshed out.

Which character – as performed by Jean Samson – was your favorite?

All of them were very interesting

I enjoyed this listening audible... Great story the only issue I had was that the way the sex scenes were narrated seemed very rushed and not well described ... But the rest of the story redemed the whole experience