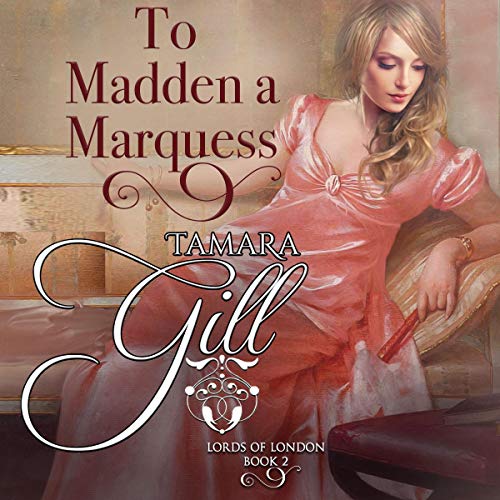 To Madden a Marquess

To Madden a Marquess

She saved his life, but can she save him from himself?

Hunter, Marquess of Aaron, has the town fooled. Outwardly he’s a gentleman of position, with good contacts, wealth, and charm. Inwardly, he’s a mess. His vice - drinking himself into a stupor most days - almost kills him when he steps in front of a hackney cab. His saviour, a most unlikely person, is an angel to gaze at, but with a tongue sharper than his sword cane.

Cecilia Smith dislikes idleness and waste. Had she been born male, she would already be working for her father’s law firm. So, on a day when she was late for an important meeting at one of her many charities, she was not impressed by having to step in and save a foxed gentleman rogue from being run over.

When their social spheres collide, Hunter is both surprised and awed by the capable, beautiful Miss Smith. Cecilia, on the other hand, is left confused and not a little worried by her assumptions about the Marquess and his demons. It is anyone’s guess whether these two people from different worlds can form one of their own…

I liked Tamara Gill's first Lords of London story, but this one is even better. I have read quite a few romances and none had ventured into the waters of excess drink, games and idleness quite so profoundly. Cecilia truly has her work cut out for her.

Their Graces Duke and Duchess DeFoix are doing a great job bringing all the characters to life. Big kudos!

I was given this free review copy audiobook at my request and have voluntarily left this review. Thank you, Duchess!

Stations In Society, Poverty Alcoholism. How Love Is Found

Hunter, Friend to Cameron in the first book of the series (this can easily be a standalone) has become an alcoholic...drunk in the middle of the day he is saved from stepping in front of a coach by Cecilia a daughter of a barrister and works in charities.
Cecilia is a friend to Darcy, again first book married to Hunters friend Cameron.
Hunter does little with his life buy drink and gamble..Cecilia has little respect for the rich, but they seem to be drawn to each other.
A wager, a fight over what to do with a building and a connection neither can deny.
Loved the story, with incredible narrators, women’s voices and men’s that vary..children’s...emotion, timing pacing and storytelling that’s incredible.
If historical romance is a favorite of yours, or even if it isn’t...try these books!

Cecilia and Hunter are complete opposites. Cecilia's every waking thought is to help the poor children of London, and Hunter's only thought is for his own enjoyment and his next drink. They both have their sights set on a building, Cecilia wants to build a new orphanage, and Hunter a gentlemen's club. They're two very different people from different classes with different goals, can they ever find a common ground?

This is the second book in the Lords of London series, I read this book as a standalone and enjoyed it. I liked how driven Cecilia was, she always had a plan for herself and others. She could be a little sharp tongued to the Marquess at times, but at times he deserved it! If you like spunky heroines and heroes who need saving, this book is a good choice. All in all, a good listen and I'll keep an eye out for the next one.

The narration is well done, with different voice actors for Cecelia and Hunter. It's a style that only takes a moment to get used to, and then it's like listening to a play. Very seamless, and very immersive. I requested a copy of the audiobook, and I'm voluntarily leaving a review.

This is the second book in the Lords of London Series. Cecilia and Hunter's story is beautifully written, romantic, sexy, and steamy. Cecilia is such a great and strong character! I loved to see Darcy and Cameron again. Duchess DeFoix and Duke DeFoix did an amazing job with the narration! I enjoyed my listening and, I totally recommend this audiobook, and this Series! I received this free review copy audiobook at my request and I have voluntarily written this review.

I got this ARC via audiobook boom and this is my voluntary review. I laughed out loud so often throughout this book that I had side stitches. When she sent her kids to beg from the Marquess was a stroke of genius. I am glad that she helped him get out of his alcoholic obsession. I am also glad that he helped her parents see the light. Good story.