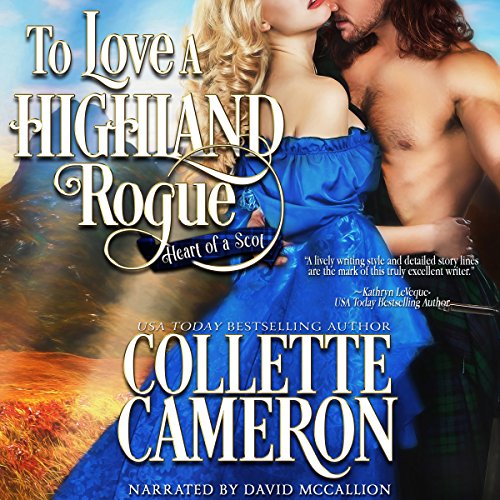 To Love a Highland Rogue

By: Collette Cameron
Narrated by: David McCallion
Try for £0.00

She's determined to end her betrothal, but he must make her his at all costs.

A Scottish lass determined to end her betrothal.

As an infant, Mayra Findlay's hand was pledged in marriage. So closely has her virtue been guarded, she's never been permitted a beau - has never even flirted with a man. However, after a chance encounter with a dashing rogue who sets her pulse and imagination cavorting, Mayra initiates a scheme that's sure to force her affianced to call off their union.

The laird who must make her his at all cost.

Until Logan Rutherford, Laird of Lockelieth Keep, inherited a near bankrupt estate, he had no intention of wedding the lass he was betrothed to as a wee lad. Now, he needs Mayra's remaining dowry to save his beloved Lockelieth. However, before they exchange vows, he's determined to know just what type of woman he's reluctantly taking to wife. So he assumes his cousin's identity; a decision that soon has him snared in a tangled web of deceit.

Caution: This historical romance contains one rakish fiery-haired Scot accustomed to getting his own way, a lass who's fed up with men dictating her life, and stubborn gelding with a superior attitude.

What listeners say about To Love a Highland Rogue

To "Love a Highland Rogue" has it all. It is a sweet romance between two people whose betrothal was arranged while she was still an infant. With the mystery involved with deception, dislike fed by parents, a King's command and greed, there is much to recommend breaking the betrothal. The question throughout is always: Will they be able to overcome their perceptions, the lies, and the loss of trust between them. Collette Cameron has written another winner. The narration is masterfully done by David McCallion. Between the narration and the story line, they keep your suspense filled attention throughout.

When they meet for the first time since they were children, Logan Rutherford decides that the best way to get to know his betrothed Mayra and what she is like is to pretend to be his cousin Coburn. From here the plot gets a little complicated. He should have given this idea more thought.

To Love a Highland Rogue is a heartwarming and humorous Highland romance, a wonderful beginning to Collette’s new Heart of a Scot series. I love the way Mayra and Logan are portrayed. She is a sweetheart, kind and caring. Logan still has a lot of the six-year-old boy in him. The dialogue is sharp and witty. As with all of Collette’s books the story flows along, entertaining from start to finish. I look forward to the rest of the series.

This book was a gift. The review is all mine.

I do love Collette Cameron's historical romance stories that take place in England. I have read a few books that were Scottish romances but never got used to the Scottish English. It's much harder to understand. And even so I enjoyed the love story of Logan and Mayra, I did not like this book as much as I like others by the same author. For those that don't have a problem with Scottish I highly recommend you read To Love a Highland Rogue. The narrator did a fairly good job. Though he sometimes overemphasized.

Having no choice leads to the right choice

I did not want to stop listening to this story. Mayra is a wonderful character. I found her honesty refreshing throughout the story as well as her need to help others. She grew up knowing she did not have a choice in a husband, but she did her best to change that. Logan was sweet even as he was deceiving Mayra. My heart went out to both of them as they dealt with their situation, and the ending had tears in my eyes.

I loved how the narrator, David McCallion, brought the story to life. He put a lot of emotion into his reading. I enjoyed listening to him.

I was given this audiobook as a gift, and this is my unsolicited review.

This was an endearing story of two people, Mayra and Logan, who were betrothed at a young age. Logan was a lovable rogue who was trying his best to make things right for his land. Mayra has been very protected by her family and she longs for some freedom. When she meets Logan there is an attraction between them but Logan hasn’t been completely honest with Mayra. How will she react when Logan’s deception is revealed. As usual, with Collette 's work there are some priceless phrases and the banter between Coburn ( Logan’s cousin ) and Logan is very amusing. Coburn must surely have his own story! The narrator had an easy voice to listen to and used different voices to bring the scenes to life.

Collette Cameron .. Thank you for this amazing story.. a story where the past was strict and the woman were allow little.. Collette’s characters were strong witted and put men in check.
Awesome book 📚 a must read !!

Collette is given us another heartwarming story. David’s scot accent was wonderful in narrating it. When Logan was only six years old he was betrothed to the baby Mayra by the king. When they became adults, Mayra wrote Logan several times asking him to have the betrothal set aside. He showed up at her home and gave his name as his cousins. Then when he saw how lovely she was, he regretted his hasty decision. Logan needed the other half of her diary because his father had squandered away what was given to them and Logan needed it for his lands. He had also heard rumors that her lands had copper and silver on it. Then things get really tangled up.

Oh this devilish Highlander sets out to fool Mira, but find himself the fool. The fool head over heels in love with Mira. Collette Cameron pens a delicious and fun romance, full of light moments, romantic moments and moments that are so tender, this woman had tears in her eyes. This story was a delight and one of my all time favorites. The narrator is outstanding. Love his Scottish brogue so much, I could listen to him all day. This is a must have audiobook.

I loved this book! I could not stop listening, I wanted to know what would happen next! There was drama, deceit, lust, love, and a wonderful story. Myra and Logan were dealt a hand that neither one would choose in more ways than one. I loved the narration and the voices for each character. I cannot recommend this book enough if you are looking for a intriguing story.