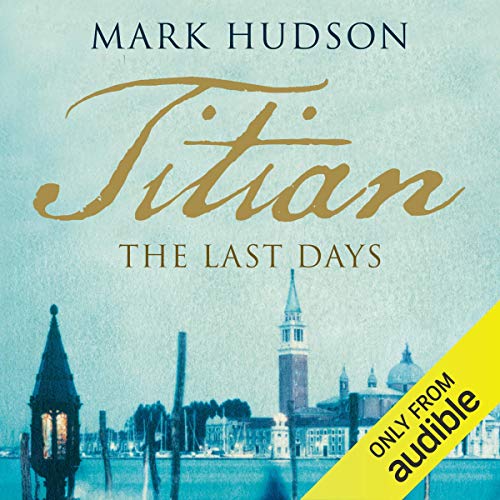 By: Mark Hudson
Narrated by: Napoleon Ryan
Try for £0.00

A compelling portrait of the life, work, and meaning of one of the greatest artists of all time.

Toward the end of his long life, Tiziano Vecelli - known to the world ever since as Titian (circa 1488-1576) - was at work on a number of paintings that he kept in his studio, never quite completing them, as though wanting to endlessly postpone the moment of closure. Produced with his fingers as much as with the brush, Titian’s last paintings are imbued with a unique rawness and immediacy without precedent in the history of Western art. As if to further cloud their meaning, after the outbreak of plague that took his life, Titian’s studio was looted and many canvases were taken; what happened to them is not known.

But what did Titian, who had experienced as much in the way of material success and critical acclaim as any artist before or since, mean by these works? Titian: The Last Days is a quest through the great artist’s life and work toward the physical and spiritual landscape of his last paintings. Vividly re-creating the atmosphere of 16th-century Venice and Europe, Mark Hudson chronicles Titian’s relationships with his own mentors (Bellini and Giorgione), rivals, and patrons - among them popes, kings, and emperors - as well as his troubled dealings with his own family. Paralleling this narrative is Hudson’s personal journey through Titian’s life and career, exploring the relentless formal development that led to the breakthroughs of his last days, and the mystery behind his missing paintings.

Moving from Titian’s hometown in the Dolomites to the greatest churches and palaces of the age, to Venice then and now, Titian: The Last Days is an original and compelling study of one of Europe’s greatest artists.

What listeners say about Titian

A skilled peek into the Master's fascinating life. Evocative, intriguing and factual. Enjoyed it!

Love Titian with a mystery twist

Totally grabbed me from start to finish and that narrators voice, Napoleon Ryan, was pure sex!

A trip to Venice

This book on Titian by Mark Hudson is really not a biography but a story of Hudson traveling around Venice searching for information on the last days of Titian. He takes us on a hunt for the house he died in during the plague of 1576. As Hudson wanders the city he describes the various painting by Titian in great depth and detail. He does attempt to show how Titian evolves as a painter from apprentice to old age. He appears to have a great deal of difficulty finding information about Titian as a man in the last days of his life. What brought me to read the book was a remark that said Titian was the most famous artist in the world and he never suffered from the dark decay of public neglect that has afflicted so many other artists from Guido Reni to Van Gogh. I thought if he is so famous why I have never heard of him. I am not an artist nor have I studied art but I have read a few biographies of artist and thought I knew some of the more popular famous ones. So I read this book to bring my art education up to date. Hudson does a good job of revealing the constant intrigue and backstabbing of the renaissance world. After reading the description of some of the pictures by Titian I did go on line and look at a few paintings. Hudson states that after Titian death Venice gathered many of Titian painting to display but the building caught fire and many were lost. Over all it has been an interesting education and enjoyable tour of Venice. Napoleon Ryan narrated the book.

Unexpectedly scholarly and accessible at once

Have you listened to any of Napoleon Ryan’s other performances before? How does this one compare?

One of your best narrators. Hard to do on what is essentially non-fiction, but he has a style and verve that enlighten the book

I bailed 1/3 of the way through on this one. The story is not totally uninteresting, although it's more about the author's personal discovery than what I'd like to learn about Titian. It actually becomes quite boring in that way. As for the "performance" I just don't understand how a bogus accent when quoting fifteen century letters/texts is appealing. My opinion: it really sucks! It's a stupid distraction and the story was not engaging enough to offset the "performance." Why are these ridiculous accents necessary? Can't a book just be read??? If you're looking for art historical non-fiction, this isn't it.

Where does Titian rank among all the audiobooks you’ve listened to so far?

Details of Titians life personal and paintings produced...I am a classical painter so I liked the story.

I did not like the performance at all. It was hard for me to follow the narration as I found it to be in authentically told. The voice inflections and imitation of the characters were not fluid and (I almost returned the book a few times. But one of my favorite painters I started with in art school was titian, so as I paint I was listening and found it to be annoying and not smooth and believable. I actually searched for another story on titian...and had to resort to listening to this til the end.