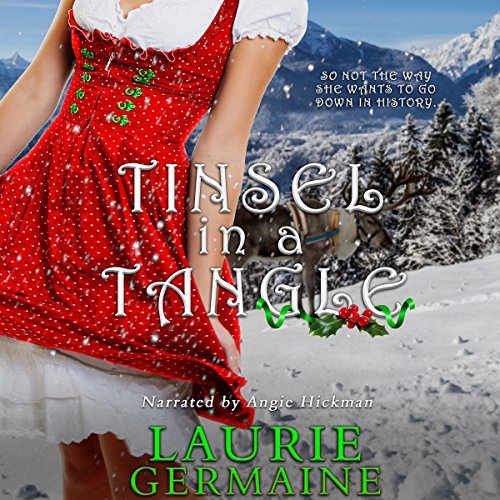 Tinsel in a Tangle

In the arctic town of Flitterndorf, generations of elves have worked alongside generations of Kringles to make gifts for believing children worldwide. Never have they endured a tall, blundering elf like Tinsel, though.

Despite her setbacks, Tinsel’s determined to prove her worth by nabbing an internship at the Workshop. But when her latest mishap destroys gift reserves and puts Christmas in jeopardy, she lands a punishment mucking reindeer stalls for Santa’s hotshot grandson, Niklas.

Now if she wants a second chance at that position, she must collaborate with the twinkle-eyed flirt to redeem herself in everyone’s eyes without messing up. For one more calamity will not only bring about the holiday’s demise, she’ll be immortalized as the elf who shattered children’s faith in Santa Claus.

So not the way she wants to go down in history.

What listeners say about Tinsel in a Tangle

Roasted Chestnuts! It's So Christmassy!!!

Thank you to Angie Hickman for providing me with a free audiobook of this story in return for an honest and unbias review.

Tinsel in a Tangle is a really refreshing Christmas romance set in Flitterndorf, where Santa, or Meister K, in this book, reside. Tinsel is known amongst her clan for bringing chaos in her wake. Having human blood in her genes, she stands much taller than the other elves and lacks that special Christmas talent. Not only that, she is developing feelings for the Kringle next in line for Father Christmas, Niklas, despite the Flitterndorf law ‘romance between elves and Kringles is forbotten’. Plus Niklas seems so intent on watching her fall, there’s no way it could ever happen.


The whole idea of this story was fantastic. I’m a huge Christmas fan but have never actually read a Christmas story before and didn’t get around to listening to this until a few days after Christmas when I was starting to get the post-festive/pre-back to work blues. This story got me back into that fuzzy Christmas spirit for a little while longer.

Tinsel was a really loveable elf. She was friendly, clumsy and desperate to find her place in Flitterndorf. Throughout the book we also see her grow, she begins as a very naive elf with a bit of a crush on Niklas Kringle. As the book goes on, she gets stronger and braver and learns to confront him.
Niklas was also a really good character, he was far from being a perfect book boyfriend, but his flaws were made very obvious, the main one, wanting to be perfect. When he was being sweet to Tinsel he was very sweet and was very close to making it into my book boyfriend list…who wouldn’t want a sexy Santa boyfriend??

This story has its own take on Christmas and it’s traditions and they are all fantastic. Flitterndorf has a very German feel to it. Elves wear dirndls, which I think is adorable. The idea of the Kringles passing the role of Santa down the line is also very well thought out, the same as how Children see young, handsome Niklas as old, fat Santa.

Little details that were mentioned throughout the story had a good meaning at the end of the book, like Niklas’ favourite drink and the name of their town.

Angie Hickman was fantastic as the narrator of this book. Her use of Scottish accents was absolutely brilliant and she had this wonderful distinct voice for young children that made them very easy to picture. She really helped to make this story what it was.

I don’t actually have any ‘not my cup of tea’ points because I thought it was a brilliant story. It really helped me keep the Chritsmassy feeling a little bit longer.


I would love to see this as a movie! I’m pretty sure it would quickly become a favourite next to Elf and Nativity!

I’ve listened to this twice now and still love it! It gets me into the Christmas spirit like no other book has, yet. I hope she writes a second book and makes this a series!

The interaction between all of the characters is fantastic! I don’t want to ruin the story, so I won’t say much about it other than it’s very original!

They way she uses alternate Christmas slang is ingenious! Can’t wait for this author to pen another book!

It’s a romantic story that clean & wholesome and perfect for teens as well as adults!

If you don’t come away believing in Santa then you didn’t pay attention. 🎄🤶

When life hands you a lump of coal, set a fire.

Shine Bright. …Or burn up Santa’s gift reserves and jeopardize the most important holiday of the year—Christmas.
Tinsel, a clumsy, human-sized elf, desires to leave a legacy of more than just mishaps, disasters and penalties; but she may never get the chance to prove to herself, to her peers, and to Santa that she is so much more than the sum of her mistakes. And Niklas, Santa’s arrogant (but dreamy) grandson, is so not an encouraging Kringle…is he? Sparks fly and emotions escalate as Tinsel and Niklas team up to save Christmas.

This irresistible and endearing tale is full of humor, fantastic dialog, delicious (yet clean) romance, and reindeer. I love the reindeer. Laurie Germaine offers a well-written Christmas story capable of delighting and satisfying both the young and the young-at-heart.

Fun read with a voice that matches the character

I love the main character and the world. Their's romance, tension and cute moments. It's a fun, clean read.

This is my first title by Laurie Germaine. I love all the tongue-in-cheek humor in this fun holiday romantic comedy. There's even a little mystery thrown in. This was a perfect listen as I finished my Christmas to-do list.

Tinsel, an oddly long-legged elf, can't seem to get a break. Everything she does seems to end in disaster. She's different on the outside, but has a heart perfect for Santa's work crew. She has her eye on a higher position in the North Pole. She just has to prove it.

The Scottish-speaking reindeer are a hoot too!

Angie Hickman is a great match for these romantic comedies. She's definitely my go to for this genre.

I received a copy of this audiobook free. My review is voluntarily written.

I. LOVE. THIS. BOOK. It was absolutely fantastic, and I loved the whole thing! The narrator does an excellent job differentiating the characters. And who wouldn't love hearing a story from the perspective of a Christmas Elf???

I was given this free review copy audiobook at my request and have voluntarily left this review. Tinsel was so cute. I loved her and Nick. The reindeer were also amazing. I laughed while listening to this. I enjoyed the narrator so much. The story was new and so cute. I would read more by this author.

This was my first Laurie Germaine's book. The story is fun, original, and beautifully written. I loved it! Angie Hickman did a great job with the narration. I received this free review copy audiobook at my request and I have voluntarily written this review.

Tinsel in a tangle

Now this is not my type of book. Based on the cover I would not have picked it up because I would have thought it had sex in it. On audible they give you a heat level and on this audiobook it was sweet which means no sex at all. So I thought I would give it a go and I am glad I did.
This is what I imagine a christmas romance to be like.
Loved it and I would highly recommend it.

Its too cute! I love this! I'm a sucker for Christmas storys and this one was really worth the read. I enjoyed the bullied to hero, the colorful Christmas cursing, the sassy deer just all of it.

Laurie Germaine has written a delightful listen with Tinsel in a Tangle. I loved the vivid imagery, endearing characters, and new take on Christmas Elves, Santa's Workshop and Reindeer. Angie Hickman was amazing bringing the characters to life. She adds the right emotions and gives them distinguishable voices. Her timing and way she said things was magical. I was completely ensnared by this listen. The storyline is both clean and refreshing. I requested this review copy audiobook and have voluntarily written this review. I will definitely listen to more books by this author and narrator.