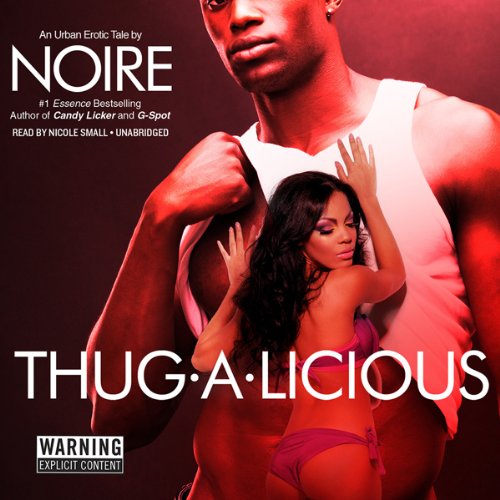 By: Noire
Narrated by: Nicole Small

"Have you ever wanted something so bad you was willing to crawl over bodies to get it? I mean, fiend for it so hard it didn’t matter who you hurt, how low you had to scrape, it was gonna be yours? That’s what music and balling did for me. They were the fundamentals behind my rise… and the perpetrators of my fall. They called me Harlem’s black prince. A rising star who carried street dreams on his back. But the streets, ya know. They got a way of coming for theirs. A habit of sneaking up on you when you ain’t looking."

Andre “Thug-A-Licious” Williams came up on Harlem’s meanest streets. But thanks to his nearly ankle-breaking hoop moves and explosive mic skills, he made it out—and dominates the rap scene with chart-topping urban hits.

Thug has sexed all the hottest freaks and has a slew of baby mamas to show for it. But no matter how many women he takes to his bed, only one can claim his heart: successful beauty salon owner Carmeshia “Lil Muddah” Vernoy, his ride-or-die queen, who has stuck by his side and had his back through thick and thin.

But Thug also has a nightmarish history with someone else. Pimp Williams, his older cousin and ex–partner in crime, is a cold-blooded killer who spreads havoc all over Harlem and will stop at nothing to get what he wants—even if it means betraying his own family, crushing Carmeshia, and forcing Harlem’s black prince down to his knees and back to his bloody beginnings.

Noire is a number-one Essence best-selling author from the streets of New York and the editor-in-chief of NoireMagazine.com.

"Following street lit sensation Candy Licker, Noire returns to gangsta Harlem to tell the tale of Andre ‘Thug-a-Licious’ Williams, a ‘Dawg-4-Lyfe’ whose death is announced in the preface and whose life unfurls in a series of dark, stop-start flashbacks…. The lives of all concerned are unrelentingly grim, but the sex really is hot." ( Publishers Weekly)
"Andre Williams, aka Thug-a-Licious, is a Harlem boy determined to make good relying on his talent and ambition…After a short life of living for the moment, loving and leaving women, he finally has to pay for his past sins, and Carmeshia retaliates for his demise." ( Booklist)

What listeners say about Thug-A-Licious

i didnt like this book, possibly sold in the wrong genre. i wont be listening to it again

This books ha everything jaw drops, tear jerkers, and so much more loved and hated some parts

I enjoy this author and this book...but there we times, I was like...please not another baby!!!

Thug-a-licious has to be FINE as h*** to have that many baby mama's. I did enjoy how the author included scene from her other books....it was like know the behind the scene footage.

Grew up in the mean streets of the Southside of Chicago. I related to every character/scenario. Visualized each scene. It’s was REAL, no BS with storyline. So Far Noire has not disappointed!!!

What made the experience of listening to Thug-A-Licious the most enjoyable?

It was a good story that flowed nicely and at a perfect pace. That narrator also did well.

What was one of the most memorable moments of Thug-A-Licious?

The robbery was such a pivotal point for thug. I was on edge. Intense scene.

What does Nicole Small bring to the story that you wouldn’t experience if you just read the book?

At first I didn't like the idea of her reading from a first person perspective, but I got over it. Each character had a distinctive voice. You could tell aspects of their personalities through her performance.

Not a strong reaction, but I was rooting for Thug.

The reason I didn't read the book sooner is because of the title, but I was not disappointed. I will definitely listen again.

good stuff, voice over was a little sketchy but eventually blended in with the persona of each character. great read.

Not a good book

Storyline was all over the place. Confused on which character was who and the ending was bad. I hate books that start busting out corny freestyles with no meaning.

I've listened to some amazing stories, and I normally don't write a review, however for this one I had to. It starts kinda slow because of the narrator. The story is so interesting though, you 4get about that! Once you start to focus on the story it becomes a true work of skill. The story winds you through commitment and pure unconditional love. Muddah, a name I hate, really showed her strength, compassion, and loyalty to everyone. Read it! Tume out the voice telling you how annoying the narrator is.

Noire is so talented and sharp.. I love the writing skills and twists and turns displayed in this urban classic.. I truly enjoyed this book and Pimp got everything his evil ass deserved!

This is some sick shit!!

It is a good story but that's was one sick m.f. plus everybody make mistakes and slip but he was just spreading it knowingly😱😱😱😱. I'm just get the one girl and settle down lord jesus!!

I listen to this in one day! Great read, sad ending. The details of the story was so vivid, great work.

The story was great but the end was incomplete to me. I had unanswered questions. I did not like that. If the story would have had a better conclusion this book would have been too star to me. Thia is the first book I've read by this author that I did not like the ending.