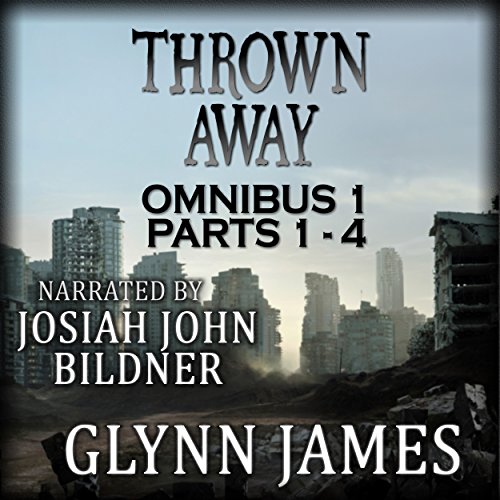 By: Glynn James
Narrated by: Josiah John Bildner
Try for £0.00

This isn't a young adult dystopian tale. It's not romance. It's not cuddly.

No one knows how the world died.

They only know that it happened centuries ago.

Among the remnants of mankind - the people that live and die scavenging in the ruins - it is thought that the strangers who live behind the barrier, inside their protected city, may still hold that secret.

But no one taken by the hunters from the city ever comes back.

For Jack Avery, living among the ruins of the outer zone and scavenging to survive is not the worst of nightmares. Something haunts him far more than any hunter patrol. In one short moment, two years before, something happened that changed him. This story is about his journey through the apocalypse, but also through his own regrets and doubts.

Are there second chances?

Can Jack find the answer to his torment among the shattered ruins of the past?

What listeners say about Thrown Away Omnibus 1 (Parts 1-4)

a post-apocalptic world with so many clues

In a post-apocaliptic and hopeless Earth, Jack meets Ryan, a six year old child, and this fact will change his life and the way he will relate to others and the world. People from the outside world live among the junk and are hunted by troopers who take them away in trucks. None of the people taken has ever come back, and nobody knows where they go and what happens to them. The boy is taken one day and, after some time, Jack decides to go and try to find him.

The premises of this story were so good, a post-apocalptic world with so many clues to find out, but the story and characters were as lifeless as an empty shell. It is very slowly paced because the main story is very often interrupted by flashbacks. In most occasions these flashback parts are longer than the main story ones, which gives a boring rhythm to the book. These flashbacks should have helped to give some depth to the characters and show how important Jack and Ryan's relationship was, but it failed at it, keeping the characters flat and their relationship as something almost casual. With what we got it is difficult to understand Jack's motivations. The end is quite predictable and you see it coming from far, which feels quite anticlimactic.

Josiah John Bildner just used two voices, a neutral one, used for the narration and most of the characters (including women), and a rougher one, for some of the male characters. Sound effects were used when voices came out of loudspeakers, but even like that, they all sounded the same. There were important changes of volume when a sound effect or a different voice was used, and I also observed long silences between the end of a chapter and the beginning of the next.

The concept of this book was very good and succeeds at awakening the curiosity in the reader, but it fails to deliver what we need to know and recreates in meaningless details from the past. I would have appreciated a deeper exploration of the characters but done in a subtler way with shorter flashes from the past. There are still many unanswered questions that would make for another good volume, but the things exposed in this story, along with the characters, feel somehow incomplete.

This post apocalyptic world was a very good conception but it sadly failed at the execution.