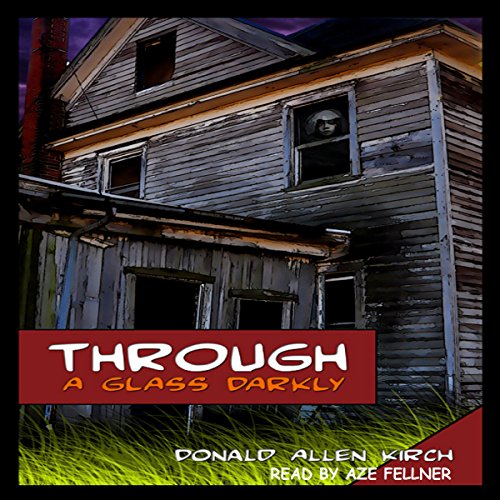 Through a Glass Darkly

The house loomed over the city like a beacon of malevolent evil. People spoke of it only in whispers. Others tried to own it, eventually coming out in a body bag. Darkness dripped from its windows, spilt blood made up the foundations of its property, and Satan seemed to have a claim on the land. Houses built along its borders nailed their windows shut so that they wouldn't have to see it. Evil resided within its ancient walls and did not care who knew it!

Manchester House was a legend - the "Mount Everest" of haunted houses.

Professor Jonathon Holzer knew he had scored the opportunity of a lifetime. With an international crew of paranormal investigators, and a mysterious "shaman" named Indrid Night, the man hoped to find some answers. There was one proviso: the city council was not aware of his venture, and the police could not help him. He would be alone.

Sometimes, when one stares into an abyss, the abyss stares back into you.

What listeners say about Through a Glass Darkly

but got a bit boring in the last two hours.

There's a house in town where all the previous owners have died mysterious deaths, you'd think that would put potential buyers off...nope. A parapsychology unit from the university is sent to see what it can do about getting rid of those pesky demons.

My one gripe was the English accent, for some reason American narrators seem to have real bother with it. This one sounded Australian by way of South Africa!!

Overall this is an entertaining story

Manchester House is evil, few who enter it come out alive.  And those who have tried to possess it, have been possessed themselves, killing their loved ones and eventually themselves.  When a teenage girl goes missing, the local police captain abandons standard procedure and calls in the famous Professor Holzer to solve the mystery.

Holzer and his band of ghost hunters enter the house confident of their skills.  They are wholly unprepared for the sheer power and evil of this house.  If not for the ingenious work of his longtime friend Indrid Knight, there would be little hope.

The adventures in the house go from a typical haunting, things moving, doors shutting, visions of dead rats coming to life, to strange dimensions between worlds and demons of incredible strength.  It is like nothing any of them have ever experienced.  And if they don’t solve the mystery, they will be swept into an infinite hell without escape.

Through the Glass Darkly starts off as a ghost story, but evolves into a supernatural tale of gods and demons.  It is generally entertaining, but not really frightening.  There is a subtle tone of humor throughout, like the cameraman who is constantly making quips and the silly arguments between the hunters.  It is fun to hear the quirky characters stumble around in their surreal nightmare.  A deaf mute who pulls infinite goodies from his bottomless bag, the doubting, sarcastic camera man, the medium who is on the verge of a nervous breakdown most of the story and the unflappable Indrid Knight who keeps a jar above his bed with the pickled testicles of the Nazi who murdered his mother.

The story is performed by Aze Fellne who does a good job.  There is a touch of Boris Karloff in his voice giving the story an over the top feel.  His accents sort of come and go, but he does a good job of keeping the characters discernible.  His voice is pleasant and adds a distinct mood to the story, which might be very different in print.

Overall this is an entertaining story.  It is hard to peg its genre, not really horror, more like occult action.  The author is pretty inventive with his demons.  Its humorous undertone keeps is light even during the most monstrous atrocities.