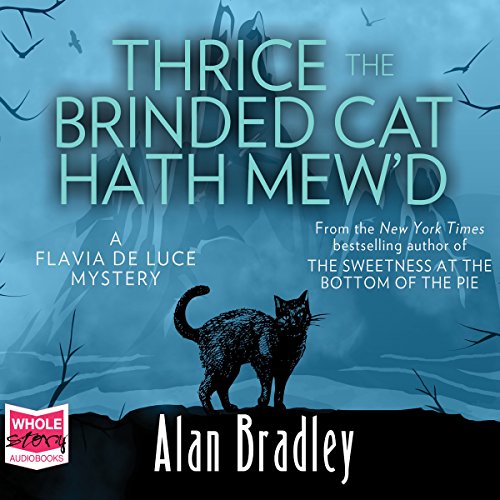 By: Alan Bradley
Narrated by: Sophie Aldred
Try for £0.00

Twelve-year-old Flavia de Luce is back at Buckshaw at last, but her homecoming is overshadowed by news of her father's illness. Forbidden from visiting him in hospital, Flavia busies herself in the village, but she soon makes a macabre discovery: the corpse of a reclusive woodcarver in an empty house, except for a curiously uncurious cat.

Curiosity may not kill this cat, but Flavia is energized at the prospect of a new investigation. However, what awaits Flavia will shake her to the core.

"The Flavia de Luce novels are now a cult favourite." ( Mail on Sunday)
"A combination of Eloise and Sherlock Holmes." ( The Boston Globe)

What listeners say about Thrice the Brinded Cat Hath Mew'd

Thought the reader was excellent

I do enjoy the de Luce books but thought this one a bit slow getting going! The narration was excellent I thought and I was surprised at the end.

I have loved the Flavia books and her development and self awareness are a delight to behold.

In this book Flavia is yet again presented with a murder to investigate and with a host of secondary characters, most of whom we have met before, sets about uncovering and solving the mystery.

The Flavia books do not have to be read in order to be enjoyed.