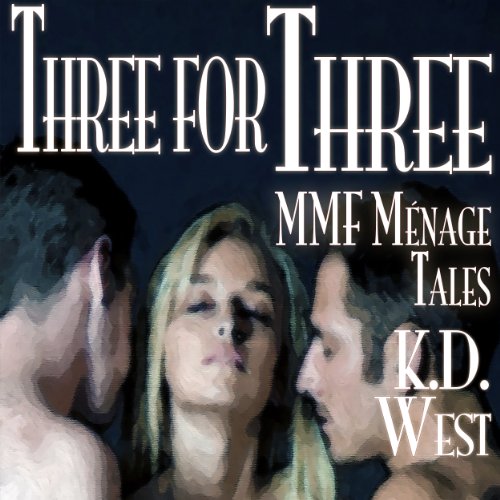 Three for Three: A Trio of Friendly MMF Menage Tales... Plus! (Friendly Menage)

Three for Three: A Trio of Friendly MMF Menage Tales... Plus! (Friendly Menage)

At the intersection of love, friendship, and desire, find proof that the whole is greater than the sum of its parts.

Three of K.D. West's steamiest, most popular tales, collected for the first time:

"Truth & Games:: Felicity, Ben, and Aaron have been friends for years. During a rainy-day get-together over margaritas, Felicity challenges her men to a game that will bring things to a whole new level. A tale of friendship, romance, and thinking outside the lines.

"The Visitor": Lea's got a four-alarm fire burning and she knows just who she wants to put it out. Or does she? Lea is in Atlanta for an interview, and her friend's brother, Sean the firefighter, is happy to give her a place to sleep. But his is the bed she'd rather sleep in. Or perhaps it's his roommate Andy's? And when a visitor comes to her that night... Well, who is she to be picky if it's one, the other, or...? A tale of sexy firefighters, a mystery lover, and embracing the unknown -- literally!

"Over the Top": Danny and Suzie, Luz and Jamie - the four had been planning for over a year to head up after graduation to the cabin by the lake. Two couples, doing what couples do. But that was before Danny and Suzie decided to be "mature" and break it off. And so now it's one couple. And Danny. And Danny's getting frustrated. A tale of desire, frustration, and a friendly, helping...

Really, do move along! This has to be the worst audible book I've had. I saw this described as hot, it's not even warm I'm sad to say. I've never written a bad review before but I want to save people wasting their credit.

What made the experience of listening to Three for Three: A Trio of Friendly MMF Menage Tales... Plus! (Friendly Menage) the most enjoyable?

The natural feel to it, sometimes these tales can feel forced but here we have something that feels a natural event that could happen to anyone

What other book might you compare Three for Three: A Trio of Friendly MMF Menage Tales... Plus! (Friendly Menage) to and why?

Now this is a hard one, its the first time I have seen something in this menage area of erotica so hard for me to compare but something different is something fresh.

Folksy and that's what made it so real, the voice was really intense and suited for each character. It was a really impressive reading.

Would you listen to Three for Three: A Trio of Friendly MMF Menage Tales... Plus! (Friendly Menage) again? Why?

Because I am not a native English speaker narrator's voice was very important to me, and his voice is absolutely adorable. Crystal clear and compelling. Stories are very well written and sexy. And the sex scenes were so hot that I needed some ice water to put out the fire. I would definitely like to hear more from the same author!