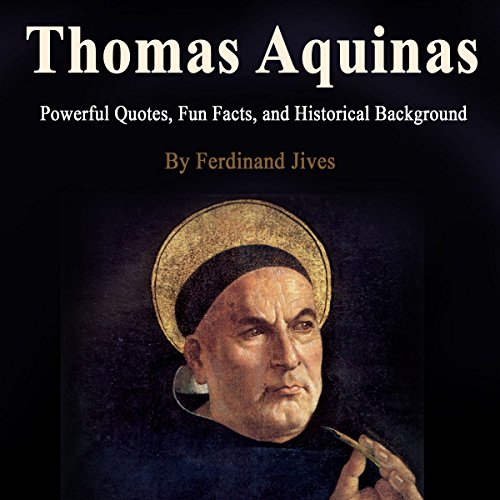 Italian philosopher, Thomas Aquinas, had a major impact on Christian theology, the rise of Scholasticism, and the Roman Catholic Church. His Summa Theologica and other works are renowned, and they emphasize the five pieces of evidences that God exists. To get a basic understanding of this deep thinker, we will touch on topics such as:

Some of the most inspiring quotes from Thomas Aquinas’ works

With all the agnostic philosophers around, an interesting perspective should be respectively acknowledged by a man who truly believed in God’s existence and the logic of proving the same.

What listeners say about Thomas Aquinas

Well, saint, more like a philosopher, but his reasoning about the existence of God goes a long way, whether you are catholic or not.

It's a great audio-book

You will not regret listening this audible. This audible can provide great information about Thomas Aquinas.

Thomas Aquinas is so amazing!

I'd recommend this book to any curious mind who wants to know more about his life.

I'd refer this book to anyone. I'm pretty sure that this audible will inspire and motivate my friends and family.

Great audio-book, but the most important thing about this philosopher is his powerful quotes that can change our mindset to good thinking or a positive mind.

I found this book interesting and informative. For subscribers like me who know nothing about Thomas Aquinas, this audiobook will help you understand who is Thomas and why he became one of the best and most influential philosopher.

His quotes are so amazing. I loved his teachings and personality. Such a great audible.

If you want to know more about Thomas Aquinas you must listen to this audiobook. This one was so helpful for me.

This one is great

I liked this audiobook. I found this book interesting because of its content and inspiring messages.

Everyone should try this audio book. You will learn from the Thomas Aquinas' inspiring quotes and natural law.