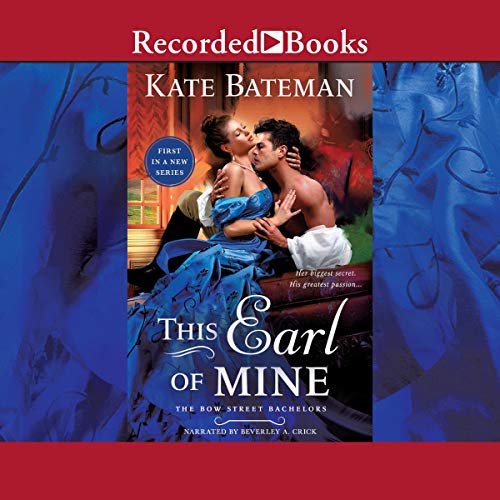 This Earl of Mine

By: Kate Bateman
Narrated by: Beverley A. Crick
Try for £0.00

Introducing the Bow Street Bachelors - men who work undercover for London’s first official police force - and the women they serve to protect...and wed?

Will a false marriage...

Shipping heiress Georgiana Caversteed is done with men who covet her purse more than her person. Even worse than the ton’s lecherous fortune hunters, however, is the cruel cousin determined to force Georgie into marriage. If only she could find a way to be...widowed? Georgie hatches a madcap scheme to wed a condemned criminal before he’s set to be executed. All she has to do is find an eligible bachelor in prison to marry her, and she’ll be free. What could possibly go wrong?

...Lead to true and lasting love?

Benedict William Henry Wylde, scapegrace second son of the late Earl of Morcott and well-known rake, is in Newgate prison undercover, working for Bow Street. Georgie doesn’t realize who he is when she marries him - and she most certainly never expects to bump into her very-much-alive, and very handsome, husband of convenience at a society gathering weeks later. Soon Wylde finds himself courting his own wife, hoping to win her heart since he already has her hand. But how can this seductive rogue convince brazen, beautiful Georgie that he wants to be together...until actual death do they part?

What listeners say about This Earl of Mine

The characters are one dimensional caricatures. The hero is supposed to be sexy because he's a brawny army guy, the foil to the buffoon of a poet. What's wrong with a literary man? How is war sexy?? Also, the descriptions of intimacy are cringeworthy. A woman's parts are described as "the middle hole" and sex is called "coitus," a term that should only be used in medical journals, and maybe not even there. The guy "kneads" her breasts like bread dough. I tuned out on purpose. There are plenty of books in this genre that have decent character development and steamy scenes that don't make you embarrassed for the author.

This is a new author and I am glad I gave the book a try. I was so rewarded.
The story was interesting. The way the H/H met and married was a new one...and in keeping with a smart heroine. I liked this, as she did what needed to be done and nothing seemed to be out of character. The hero is wonderful, and not a rich lord, as is the "standard". He is also not a fortune hunter, but a man with a real job, just trying to make a life for himself. I really liked him, and not just for how he looks. Both of them are likable and you want the best for them....and they get it.
The story has complexity and adventure, so it keeps your interest. The relationship develops and I enjoy when you travel along, learning and advancing with the characters. The end is the only issue, as it wraps up a little too conveniently, but it's at the very end, so does not bother me.
The narration is great and I bought it as she is one of my favorites. Good job and the story gives her a lot to work with as there are several accents to master.
The hero has 2 friends that are funny and loyal. The first books sets up for the next 2 . I can hardly wait! Looking forward to more from this author.

Love this book. found myself laughing out loud great characters. can't wait for the second book of the series

Great fun. The entire premise was totally unbelievable in every way but it was great fun and I liked the chemistry between hero and heroine. He was the typical self assured macho guy in some ways but not as arrogant as the typical titled guys and it was kind of fund to see roles reversed and a tough smart heroine who ran a business even if it all seemed very far fetched — he had to be self assured to match up to our heroine. Read it for the sheer fun of it and forget looking for reality. That’s not what regency mystery romance is about anyway. Narrator did well for men’s voices, which not all women narrators can do. I’m going to try the next one right now. Used a credit on it and not sorry and will use one for book 2. Delightful and complete escapism!! Note on steam: I thought it had just (almost) enough steam — I’m not crazy about the totally clean romances as they seem a bit too prudish and so it’s hard to get into the feelings between H and H(we want to see how they do in bed!!!). I also don’t like the books where 1/4 or 1/3 of the story is about her slick pink folds and his throbbing member over and over and over. This one had a bit of somewhat explicit steam in just the right places and it definitely didn’t take over the story.

Excellent narration, lots of action for both hero and heroine. Many characters made it a little hard for me to identify who'd who, but I did enjoy this audio.

This Earl of Mine by Kate Bateman

This was my most anticipated read for this quarter and it truly did not disappoint! I love everything about this book and Ben. A must read and everyone will surely enjoy and fall in love. ❤

Great story. easy to follow. never tiresome. plot is progressive for the era. enjoyed the characters very much.

I really enjoyed this story and found myself rewinding 30 secs often to make sure I didn’t miss anything, so it took me a bit longer to get though than normal.
Georgie is a shipping heiress who is being threatened by her creepy cousin. To take herself off the market she decides to marry a convict set to hang... thus making herself a Merry Widow. However the initial convict falls through and she marries the very eligible, but poor, and under-cover Mr. Wild who is set to be transported to Australia.
Welp, that doesn’t happen and they meet at a party and come up with a plan: she will pay her own husband to court her to keep other scoundrels off her back. They get embroiled in some espionage scheme about submarines (semi-submersibles if I were to guess given the time period) and it throws them together and they get to know and like each other.
Wild’s reasons not to want to marry or fall in love are a bit vague and under developed (bla bla, parents didn’t love each other, bla bla dad was semi-neglectful) but really no big angst here.
There was definite chemistry between these two from the very beginning and I kinda wish Wild had kept his beard cuz the whole hot convict thing was kinda smexy. There were 🍆 🍆 the first of which was pretty hot... the thing with the wedding ring 🥵! But I wanted more of an emotional connection at that point. They both played it really cool and that was a bit of a downer. It wasn’t until they separated for a bit that they started admitting their feelings and it seemed to get al muddled up between the creepy cousin drama and the submarine drama. So the emotional aspect got lost in and amongst the other plot lines unfortunately.
However once some of that got cleared up I did love how they dealt with the monetary inequity and how Wild a no point found her money emasculating but rather thought SHE deserved better. It was well done!

Enjoyed! It was a fun and easy listen and not overdone. Beverly Crick is amazing!

I enjoyed this book and the characters. The narrator was good and I'm on to book 2.