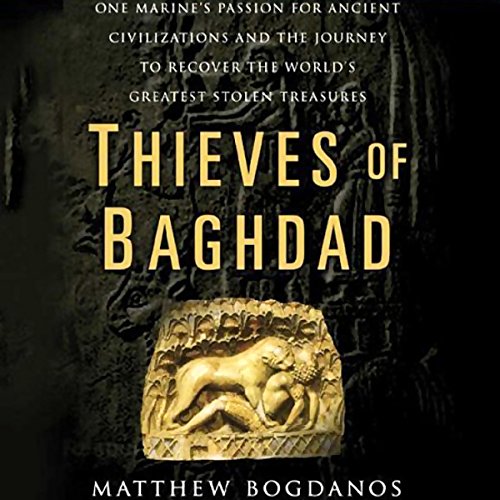 A blend of treasure hunt, police procedural, war-time thriller, and expose of the international black-market in stolen art, told in the voice of a truly remarkable man: a soldier, a father, and a scholar.

The New York tabloids call him 'the pit bull' for his relentless prosecution of high-profile defendants. He's an assistant D.A., a spit-and-polish Marine, a trigger-puller on counter-terrorist missions to Afghanistan, a competitive boxer, and a dedicated classics scholar. So when Matthew Bogdanos discovered that the Iraq National Museum had been looted during the battle of Baghdad, he immediately embarked on a mission to recover the stolen antiquities. Accompanied by a select group of men, Bogdanos set off across the desert without official sanction, risking his career and his life in pursuit of this priceless international treasure.

Thieves of Baghdad immerses the listener into the rich culture, the colorful characters, the double-dealing, and the derring-do, to sort out once and for all what actually happened during the chaos of the Baghdad invasion, exactly how the thefts took place, and how the most notable objects were retrieved. We hear Bogdanos and his team going on raids and negotiating recoveries, blowing open safes, and mingling in the marketplaces, often encountering an assortment of rogues and villains. He gradually earns the trust of Iraqis eager to preserve their cultural heritage, and then stuns the world by unearthing the most sensational treasure of all, The Gold of Nimrud: over 1,000 pieces of gold jewelry, precious stones, and ornaments often called "Iraq's Crown Jewels".

I'm positively certain that this a great story. The tragedy is the narrators voice irritates me that much I can't listen for more than 10 minutes. Matthew Bogdanos, you co-wrote this book...please don't read it.

Started well, went no where

This book started off interestingly and had heaps of potential - personal experience in the war combined with famous archoeology wonderful history of civilisations and a backdrop of Baghdad. Unfortunately as the book went on it didn't develop and started repeating itself, quickly "slipping away". No further insights were learn't about the people (including the narrator) , or the context of these events set in their own lives. Overall dissapointing.

Really held my interest. Informative. Learnerd a lot through listening. I enjoy having new experiences through books, and this definitely fit the bill.

I just found the whole thing' story, narration unbearable and juvenile.
If you are interested in Art and History, please don't waste your time.

This book is a must for anyone who wants a full account of what happened at the Iraq museum in 2003. Author as narrator is down to earth and easy to take.

First, I think the narrator was a poor choice. Not that he's a bad narrator, but not right for this work.
Second, I think the author is a bit self-indulgent and builds himself up too much.
But that said, the story is told with broad brush strokes and too little background. More detail and more history would have made a better book.

A quick paced, interesting book with a number of twists and turns. The book provides some different insights to Operation Iraqi Freedom, while generally ignoring the rest of the war, the focus of the book reads like a good mystery.