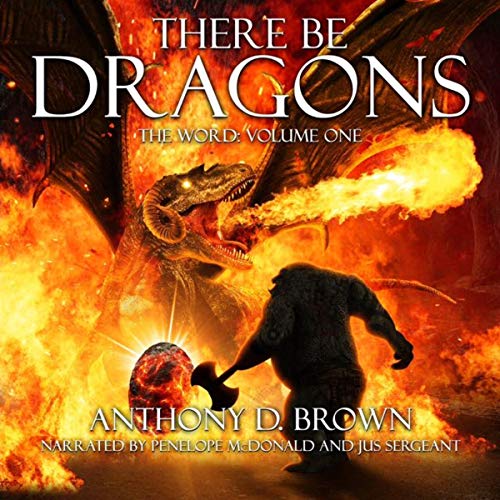 When fellow student John Foremile turns up at his flat on a rain-sodden winter’s night, former Merchant Navy Captain Rex Slingsby thinks he’s in for just another boozy night down the pub. John, however, has come laden with a package of ancient-looking manuscripts, and Rex is soon engrossed in reading an outlandish tale of a powerful, benevolent race of Dragons and of the human wizards hell-bent on destroying them.

Incredulous at first, the two friends quickly find themselves embroiled in an epic quest to rescue a fertile dragon’s egg, hidden over a thousand years before in a remote cave by its desperate mother. Pitted against them is a motley crew of 12-foot Trolls, hellish hounds, and power-crazed Mafioso wizards, all of whom, it seems, will stop at nothing to bring Rex and John’s quest to a premature and deadly end.

There Be Dragons, book one of The Word trilogy, introduces a brilliantly imagined and often disconcerting universe, sweeping listeners breathlessly along from cosy bachelor pads to desolate Welsh mountainsides; from state-of-the-art yachts to mind boggling planets thousands of light years away.

What listeners say about There Be Dragons

Fans of Arthur C Clark, Carl Sagan and Alistair Reynolds will love There be Dragons. A rich tapestry of hard-core sci-fi, blended with classic slapstick British comedy styles make this a great listen, with rich and thought-provoking concepts about the nature of our universe and why we are here, interspersed with fast-paced action make this a great first book in what looks to be an epic tale. The narration is split between two fantastic readers, who both bring their own unique styles to this exciting adventure. I particularly enjoyed the way the narrators are used to highlight the different timelines, as the book does jump around in time and space quite a lot, so having two narrators work on this made a lot of sense. I can’t wait to hear the second book in the series.

I very much enjoyed this audiobook, the narration is superb and I look forward to listening to future additions to the series.

Took a chance and was pleasantly surprised!

Normally, I’m very hesitant to purchase an audiobook on Audible without reading through at least a few pages of comments. But I just couldn’t get excited about any of the books in my wishlist right now.

So I went with There Be Dragons based solely on the description and audio sample, and I’m really glad I did. This book reminded me of a more fantasy-ish and much less disjointed Cloud Atlas by David Mitchell (the book not the movie). It was engrossing, compelling and original. You do have to make it through about ten minutes of some hard to comprehend stuff in the first chapter, but from there, the story takes off and just keeps plowing forward.

I highly recommend this to anyone who is a fan of the fantasy genre while also being able to appreciate a story whose plot doesn’t only revolve around constant battle scenes and horribly written, pubescent, masturbatory scenarios....
——————-

At this point in my rant I must clarify that I’m not against sex in literature, If anything I would be a proponent of it. My problem is the fact that none of the current/up-and-coming fantasy authors I’ve read or listened to lately seem to have the ability to write sex in any sort of relatable or interesting way. They don’t even bother to spend more than a sentence or two trying to make the situations plausible for the characters or relevant to the plot.

Yep. I think I’ll leave it there.

good storyline.
struggled with last chapters.
Hard to follow & understand.
Will get book 2