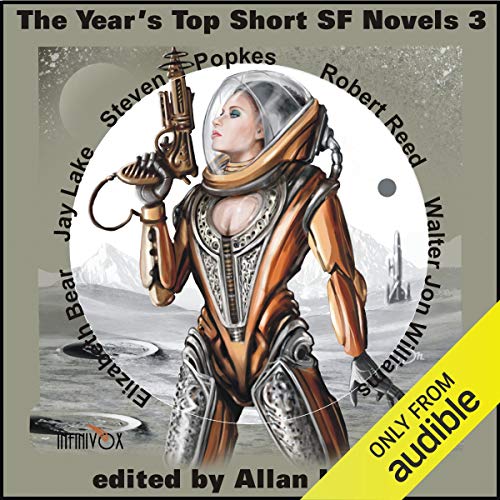 Short novels are movie length narratives that may well be the perfect length for science fiction stories. This audio collection presents the best-of-the-best short science fiction novels published in 2012 by current and emerging masters of this vibrant form.

In "In the House of Aryaman, a Lonely Signal Burns", by Elizabeth Bear, Police Sub-Inspector Ferron investigates the murder of genetics engineer, Dexter Coffin, who has been turned inside out, in a cutting edge biomedical lab set in a not too distant future India.

In Jay Lake's "The Stars Do Not Lie", Morgan Abutti is soon in fear for his life when he tries to announce his discovery of something in the stars that contradicts the creation myth of a major religion on his planet.

In "The Weight of History, the Lightness of the Future", also by Jay Lake, set in the author's "Sunspin" series, the Howard Immortal, Before Michaela Cannon, and an untrustworthy ship mind investigate the cause of the Mistake, an alien attack on human civilization with an EMP weapon that occurred more than a thousand years ago and wiped out most of its technology.

In "Sudden, Broken and Unexpected", by Steven Popkes, a burnt-out, talented musician is hired to help a world-class rock star divaloid, an electronic construct, prepare for her new world tour. There's only one problem: the musician passionately despises divaloids.

In Robert Reed's "Eater-of-Bone", marooned human colonists, from the "Great Ship", fight for dominance on a planet inhabited by smaller, weaker, and less intelligent aliens.

Finally, in "The Boolean Gate", by Walter Jon Williams, set in the 19th century, an elderly Samuel Clemens escapes his Mark Twain persona through his friendship with Nicola Tesla. As Tesla's inventions come to fruition, Twain suspects that Tesla has opened up a gateway to an alien intelligence.

What made the experience of listening to The Year's Top Short SF Novels 3 the most enjoyable?

What was one of the most memorable moments of The Year's Top Short SF Novels 3?

Each of the stories were thoughtful and left me pondering long after.

All three narrators were quite competent and enjoyable.