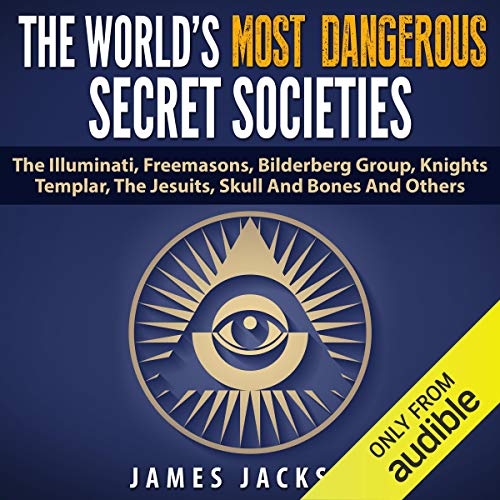 The World's Most Dangerous Secret Societies

By: James Jackson
Narrated by: Jim D. Johnston
Try for £0.00

To some, the term "secret society" conjures up an image of a shadowy and elite cabal meeting behind smoke-filled rooms, discussing tactics of world domination and manipulation straight out of the most far-fetched espionage thrillers. To others, the image of secluded men (and occasionally women!) banding together in exotic garb to perform colorful ceremonies, impart hidden knowledge, and bestow fancy but incomprehensible titles upon one another springs to mind.

But just how far-fetched and fanciful is the prospect of a secret society? Could it be that, in any given echelon of the population, there are groups that exercise inordinate amounts of power and influence over the rest of us? Could these exotic, members-only clubs really pose such an immediate threat to our well-being that our very way of life is endangered? Quite frankly, the disturbing answers to those particular questions are yes and yes. Right in our midst there absolutely exists clandestine organizations, consisting of both men and women, who wield a dangerous amount of influence and power over the entire world populace.

In his book, entitled The World's Most Dangerous Secret Societies, author James Jackson explores these dangerous secret organizations and their members. He expounds upon their beliefs, hidden agendas, and their ultimate goals of a new world order and world domination.

Here are a few of some of the dangerous secret societies that will be thoroughly examined.

What listeners say about The World's Most Dangerous Secret Societies

I couldn't listen for even one minute. the narrator has a whistly s going on. dreadful! so no idea if the content is any good!

Very interesting & quite informative. Recommend for a broad knowledge of these societies. We should be aware.

I thought the other reviews were overly harsh and purchased anyway. What a regrettable decision. The narrator makes this make completely inaudible. You will want you money back. Just as I do.

Narrator has a whistle.

Impossible to listen to due to the narrator whistle. Refund would be in order. Thanks

Re-record the audio please!
Probably worst recording on an audio book ever. My ears hurt from this.

Narration was poorly done. The narrator sounded lazy half the time and his s was very harsh.

Narration is not good

I can’t properly rate the book - I was quite interested in it - however I cannot get past the first chapter due to the narrators whistle in his voice - I will be trying another similar one & getting a refund. If this one gets re-narrated I’d definitely try again

Gave a general overview of societies. Dealt in facts and not rumors which is nice to hear. My problem was with the narrator who has a lisp that at some points was so distracting that I could not concentrate on what he was actually saying.

The Devil is in the Detail :)

adds more facts about current problems and how they are created so a fix can be brought to bare. That keep the powerful in power.