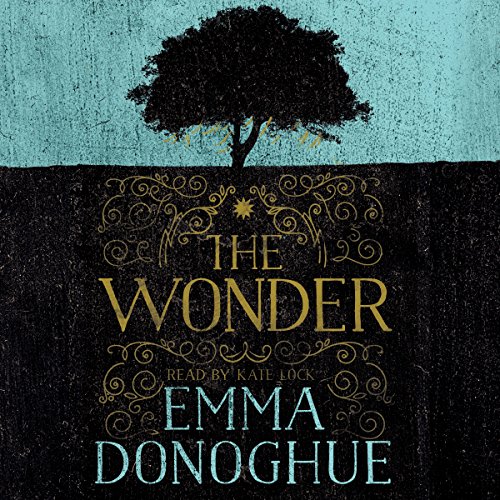 By: Emma Donoghue
Narrated by: Kate Lock
Try for £0.00

An 11-year-old girl stops eating but remains miraculously alive and well. A nurse sent to investigate whether she is a fraud meets a journalist hungry for a story.

Set in the Irish Midlands in the 1850s, Emma Donoghue's The Wonder - inspired by numerous European and North American cases of 'fasting girls' between the 16th century and the 20th - is a psychological thriller about a child's murder threatening to happen in slow motion before our eyes. Pitting all the seductions of fundamentalism against sense and love, it is a searing examination of what nourishes us, body and soul.

What listeners say about The Wonder

If you're Irish don't bother with this audiobook.

An excellent novel absolutely obliterated by a blatantly offensive mockery of Irish accents in this audiobook. Honestly questioned whether this was a joke. Purchased this for my grandmother but would be mortified to have her listen to this. Sick to the teeth of this sort of distasteful mockery of the Irish and other such cultures who are time and time again made a joke of by English media. Colonial mindset sustains even in this day and age.

The voice overs are pretty bad. Not only a bad accent, but difficult to understand. Normal reading voice is fine. But it really does spoil the book.

This great book by an Irish author was once again destroyed by an ignorant English narrator putting on cartoon accents that made it all but unlistenable. Aside from having one Irish character sound like Bosco and another like Bob Geldof, her overall reading is melodramatic and careless, often getting the names of characters wrong. This recording should not have passed any quality control for a publisher

Story twists and turns drew me in. as an Irish listener, found Kate Lock's Irish accents occasionally a bit too heavy on the Leprechaun so became a bit of a distraction.

That is NOT and Irish Accent, Just Stop.

On twitter I described this as the most painful audiobook I've ever listened too and really that isn't far from the truth. The tag line should be 'British women butchers Irish accents in a way that's frankly offensive'. The way should does the Irish characters accents makes them come off as the most ill educated, naive idiots the world ever laid eyes on. Not one Irish person's accent was accurate. Also in 1850s Ireland not all Irish people in Athlone would've spoken fluent English.

The story seems fairly decent and I may stick the print copy on hold at the library but don't put yourself through this monstrosity its not worth it.

Also audiobook producers there are 5 million Irish people out there, could you not have asked one of them to work in tandem with Kate Lock and do the Irish accents? Seriously, the Irish have had their culture erased for long enough!

A wonder of a narration!

This is a compelling account of the horrifying phenomenon of fasting girls & life in rural Ireland in the years following the potato famine. The writer presents us with a cast of credible characters & a gripping storyline that lays bare the dangers of religious hysteria and family secrecy. The clash between faith & science, the development of nursing, oppression of the poor and the conflicted gulf between Irish & English are all expertly woven in as underlying themes. It is beautifully written. And for me the accomplished narration of Kate Lock lifted the book into an even higher league.

It brought out every emotion possible.Well written

I continued to think that I had heard this story before but this must be because it is an event that keeps occurring throughout the world in many cultures/religions. I was in turn horrified, puzzled, but mostly furiously indignant. The narrator was wonderful with so many accents and she voiced the girl with such sympathy. What a wonderful writer. I expect, like myself many people tried this book after having loved Room. This is different but still a kidnapping in effect.

The reviews o read on audible suggested I was going to have to grit my teeth for the narration in order to listen to Donoghue’s The Wonder .

I would actually seek out Lock’s narration after this, something I have only done for one other reader. Obviously not on the prowess of her accents but on her clear voice, consistency in voicing characters , and the lack of harshness in tone.

The story itself - well- it’s not Room! Nor was any character as endearing to me as the boy in Room . I found some of the naïveté of Lib in her new surroundings and the misunderstandings she made - to be out of accordance with her job and time. But her character and character development was achingly understandable and realistic I felt and she had my sympathy even when I was frustrated with her - I felt it easy to identify with her.

This book hooked me and luckily I ignored the negative reviews as I have enjoyed previous books by Emma Donoghue.

Interesting subject matter and not being Irish I can't judge the correctness or otherwise of the accents. The narration complemented the story for me.

It’s very disappointing that the ever-excellent prose of Emma Donoghue was given to a reader who can’t do an Irish accent. For a recording of a book set in Ireland. In which every character but one is Irish.

Lock wouldn’t be a bad reader if she was reading a book set in England, but she’s a terrible choice for The Wonder: her fluting faith-and-begorra voices make every Irish character sound like leprechauns, not people, which kills the book. I’m actually returning this, it’s so bad.

Sorry, Ms Lock, I’m sure you’ll be fine if you stick to books that don’t demand accents beyind your range. But if the publishers are reading this: please do another version. Irish actresses who learned to speak RP English are not hard to come by, and that’s what you need. I would like to listen to this book, but this recording is unlistenable.

A bit slow, a bit redundant, but the story gets better if you can wait it out a bit

wonderful book. the telling was not so clear although. but still overall very arresting read.

This is a powerful tale involving characters who strive to comply with the demands of the cultures they are embedded in. Whilst at the same time colliding with the differing beliefs of others. The result is ongoing collision involving issues of gender superiority, fervent religious beliefs vs science to name a few. This occurs at the expense of the vulnerable main character. Dark secrets emerge which deepen the complexity of this psychological thriller. Unfortunately the narrator brings a pantomime like emphasis to the characters which eclipses the strength of the narrative.

Moving story about love and life

Would you listen to The Wonder again? Why?

Probably, I have already read the book:)

What does Kate Lock bring to the story that you wouldn’t experience if you just read the book?

When Lib talked about her daughter