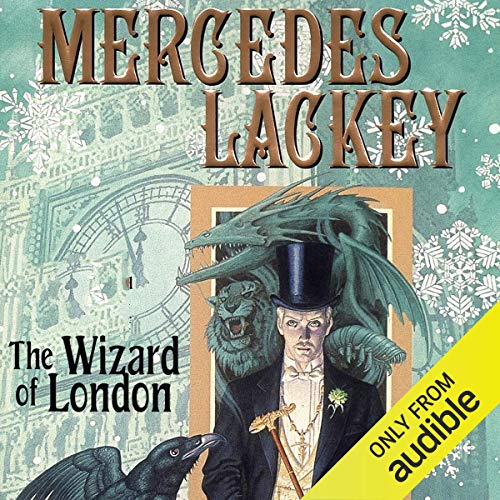 The Wizard of London

By: Mercedes Lackey
Narrated by: Michelle Ford
Try for £0.00

Isabelle Benson has learned that an Elemental Master is behind the attempts on her students' lives-and the would-be murderer is someone very close to her former flame, the Wizard of London.
©2008 Mercedes Lackey (P)2009 Audible, Inc.
Classics Dark Fantasy Historical Fantasy
Show More Show Less

"Lackey's latest Elemental Masters novel is set in Victorian England. The Harton School for Boys and Girls, run by Isabelle and Frederick Harton, is one of the few schools that takes students whose magic doesn't pertain to the elements...Sarah Jane's parents, missionary healers in Africa, send the 12-year-old to Harton, and she is happy there, especially after she befriends Nan, a street urchin. After an attempt is made on Sarah and Nan's lives, it is clear that a powerful Elemental Master wants one or both girls dead...Interestingly drawn characters hold our attention to the end, even if the good ones are very, very good, and the bad are full-blown villains." ( Booklist)

What listeners say about The Wizard of London

I love Mercedes Lackey books and it's wonderful that this series is now available as audiobooks. I've really been enjoying them, and this one was no exception.

The only problem I have is that for some reason, the epilogue has not been included in the recording! So the ending isn't really as satisfying as it is in the book. Where is the epilogue?

....who did very little wizarding. In my opinion, not the best Mercedes Lackey book. It is well written and the story carried you along, but at the end I was disappointed. It needed a few more "mini-adventures" along the way.

The Elemental Masters have been fantastic companions during my (rather boring) house cleaning exercises. If only I could get a brownie to help me😊!

I love this work by Mercedes Lackey. The narrator also foods an excellent job. Pure joy.

Much as I love these tales, this is the weakest of the Elemental Masters novels. Most of the story involves Sarah and Nan, young, magically-talented girls who come to live at the Harton School in London, run by the also-talented Isabelle Harton and her husband. Sarah has been sent home to England "for her health" from her parents' hospital in Africa, along with her remarkably wise and capable African Gray parrot, simply called Gray. Nan is taken in from the streets, where she has been living a tenuous life with her drunken and drug-addicted mother, and she becomes a valued friend to Sarah and an asset to the School, even as she begins to learn how to manage her ordinary and extra-ordinary talents.


Also living in London is Lord Alderscroft, the so-called Wizard of London and a Fire Master, head of the Elemental Masters group. However, Alderscroft has come under the influence of Cordelia, a secretive and powerful Master. She has gradually cut him off from all of his ordinary enjoyment of life and his friends and surrounded him with a crowd of the politically influential, since she hopes to accompany Alderscroft as he rises to political power and influence. And then she begins to crave even more power, power beyond the usual reach of women in this Edwardian era.

This is a weak adaptation of the Ice Queen tale, with Alderscroft as the stricken boy, and while the adventures of Sarah and Nan are interesting, the story really hasn't got the weight of Ms Lackey's usual plots. The narrator does a creditable job with slightly different voices and reads at a reasonable pace.

This is a perfectly pleasant fantasy book for bright twelve-year-olds. I would happily read it to a niece or a nephew, but as an adult read it is a good deal short of satisfying. The narration is competent but a trifle cloying, perhaps even for twelve-year-old ears. I have enjoyed several of Lackey's books, but I probably should have investigated a little more deeply before I snapped this one up when I saw it on sale.

For those looking for whimsy and a Victorian London setting in a fantasy tale, I would strongly recommend "Neverwhere" by Neil Gaiman, a book which will delight young people and adults alike.

Not my favorite Elemental Masters

All of the Elemental Masters novels are good, but I think this one is my least favorite. I'm not entirely sure why. It seems kind of fragmented to me. It is worth reading, however, especially if you're going to continue on to read Home from the Sea (book 7), in which some of the key characters from this book re-appear. Also, it does give a little more insight to Lord Alderscroft, who is a minor but important character in all of the other novels. Most of the Elemental Masters novels take place when he is a much older, solitary man living in the HQ of the Elemental Masters' council (the "White Lodge"), as their acknowledged leader. This novel was fascinating because it takes place when he is in his late 20's or early 30's and partially explains why he is the way he is.
One issue I had with the audio book - and it was fairly minor as the word wasn't used often, but it was a huge irritation for me - is the reader's pronunciation of the word "sidhe". She pronounced it SEE-DAY, which is not only incorrect, it doesn't even make any sense based on the spelling of the word. I just have to wonder...who on earth assigned this woman, and the entire crew involved in production, to read a fantasy novel without making sure that SOMEONE knew how to say sidhe? What's more, the way it was used in the book involved a play on words with with the word "she" (female) that was completely lost and non-sensical due to the mispronunciation. It can't be all that difficult to make sure strange and unusual words are figured out ahead of time and communicated to the reader. Other than that, she was a good reader. Her "cockney" accent for Nan was well done, and the characters were distinguishable by her tone and style.

Argh! Sidhe is pronounced "she" NOT "sid-he"

I'm not sure if it is worth complaining about an audiobook released 10 years ago, but oy-jeebus! I am not going to buy another Mercedes Lackey audiobook unheard. I will borrow them through my public library and then make the decision whether or not to purchase.

I loved the friendship between Sarah and Nan. Also, the paranormal aspects are fascinating and, in my opinion, accurate. The best friends trope has always been one that has attracted me. I especially liked the danger the girls went into and out of. After a while, though, the stories seem to become a bit slow. It became less about the girls and more about the school's headmistress. I like her as a character, but I like the girls better. That's why I like the second book in the series "a study in sable" better than this first one.

A lot better now that it's complete

Wonderful fun. . . Now that audible has kindly given me the last chapter missing on my first version. I was specially happy my complaint was address and a solution found.

A time to Denver Ingo

For a long rain day, and time to remember that what is most important in
your life and love s

A delightful installment, but much shorter than it should have been. I would still recommend checking it out.