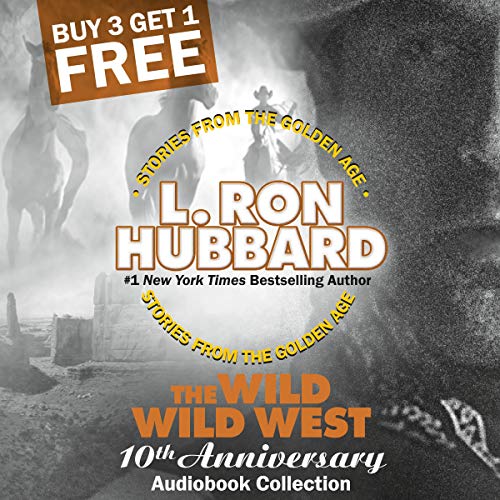 "Flair of a Louis L’Amour or Zane Grey." (True West)

L. Ron Hubbard spent his formative years in a rugged Montana, among the cowpunchers, lawmen and desperados who would later people his Wild West adventures with authenticity.

Living on the frontier, he was not only breaking broncs at a tender age but also among the few whites ever admitted into Blackfoot society as a blood brother.

During an illustrious literary career, Ron threw a wide loop over the land of his beginnings and wrote 38 tales of honor, integrity, and courage of the American West.

These state-of-the-art full-cast audiobooks are complete with music and sound effects - a “movie of the mind” experience.

Every man walks with a shadow...but what happens when he acquires a second one? Ask Brazos, a cold-blooded killer for hire. His latest job put a bullet in a man schooled in the art of witchcraft, and this killing brought a deadly curse and a second shadow. Shadows from Boot Hill puts a supernatural twist on the classic Western.

Also includes "The Gunner from Gehenna", in which a plot to steal a miner’s gold reveals how a good man can go bad...and a bad man can do good; and "Gunman!", where an aging gunfighter turned lawman shows his town what a real man is made of.

King of the Gunmen:

They call him Suicide, Smoke or simply Sudden Death. His name is Kit Gordon, and from the banks of the Mississippi to the shores of the Pacific, he is the King of the Gunmen. He’s about to discover that it takes more than a quick draw to stand up like a man. Falsely accused of murder, Kit escapes to the next county over - and a new identity. But drawn into a bloody feud, before it’s over he’ll have to reveal that he’s a wanted man - or run for his life. Feel the heat rising off of the Arizona desert and a blazing Colt .45 as the King of the Gunmen takes you to the land of deadly gun fights.

Also includes "The No-Gun Gunhawk", in which a legendary gunslinger’s son swears never to take up a gun - until he is forced to break his vow when it becomes a matter of life and death.