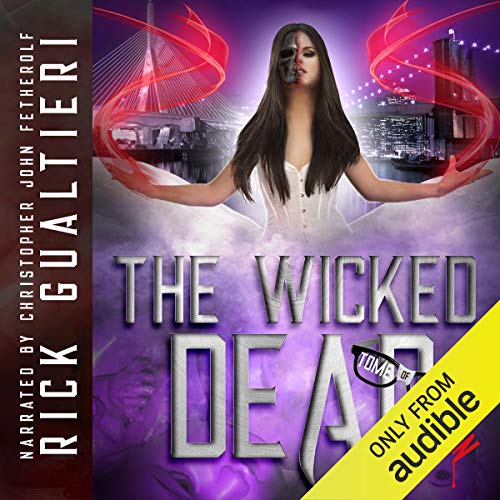 There are reasons we fear the night. Now he must become one of them.

Bill Ryder has a powerful destiny. He just never expected it to involve an amnesiac bloodsucker, a bunch of D&D dorks, and a hormonal witch. It's time for the gamer, geek, and legendary vampire to embrace his fate. Ordered to storm the vampire stronghold in Boston, Bill must approach the doorstep of the invincible undead warlord he's destined to face. It's his only chance of stopping Armageddon.

As his enemies stand in his way and his allies falter, the vicious beast inside of him wants out. If he stands tall and faces his fate, the world might just have a chance of surviving. If he fails, an unquenchable evil will destroy everything Bill knows and loves.

Why can't the end of the world ever be easy?

The Wicked Dead is the seventh book in the Tome of Bill saga, a series of foul-mouthed horror comedies with a nasty overbite. If you like bloody fight scenes, geeky in-jokes, and breakneck-paced action, then you'll love Rick Gualtieri's latest installment in the perfect vampire series for the 21st century adult.

What listeners say about The Wicked Dead

Such a unique and enjoyable series

I'll be really sad to see the end of bill as i think the next book is the last in the series, but I've no doubt I'll listen to them again at some point, so there's that :-)

Another great story by Rick Gualtieri

Anther cracking book. I absolutly recomend it and the hole Bill the Vampire Saga. Rick Gualtieri has a fantastic way of righting that makes you feel part of it.

Love these books, can't wait for the next one. Just re-read the books. Hope Tom gets fixed.

Since the first entry in this series, I have been hooked on our lovable nerd of a vampire and his companions. I have to admit to holding off from this entry simply because I know there are two books left (including this one) for me and I didn't want the fun to end (though I have now paid attention to detail and realized there are some .5 entries I can continue with). Rick is a great writer and this series hits home with me on so many levels. From the battle with Vehron (Hoping I spelled that right as I listened to the audiobook) to the re-developing relationship between Bill/Sally and the ever complex relationships with Bill and just about everyone in the story, this book definitely drew me in. I will admit that I did not see the twist coming near the end of this book and I can definitely see the setup for book 8.

Great work, Rick. For anyone looking for a fun journey, please check out ToB. I am going to assume you have since you are looking at book 7, but I still have to throw out the obligatory recommendation for such a fun series. If you aren't convinced about whether or not you should read this series by now, DO IT!

Some story line comclude, with new ones reavealed. Another great chapter in the continuing tale.

Finally a battle with the feet!

Story progressed much more in this book, and finally Bill starts embracing his 'inner demon' and acknowledging it as a tool to fulfil his destiny. Honestly, all very interesting and an exciting listen.

Very much looking forward to the last book.

Narration is better in this book, it sounds like they went with the newer version of Bill's voice. Still changes a bit, but its definitely better.

I love this series honestly... my beef is with the narration . While listening the voice will change in tone and volume as I assume different tracks are put together. It can be distracting. This is a problem for the whole series so far.

The entire series is pretty funny and the author has done a great job of throwing in plenty of funny dialog between characters.

bill is so Lucky

enjoyable story still lots of swearing. used Thus less but still too much. looking forward to the next book.

I laughed so hard, it hurt. Definitely the best book of the series. Punching Turd in the brown-eye..... ROTFL.

Next to read is Shining Fury. There are two books in this series that are not numbered (Sunset Strip & Shining Fury) so make sure and look up by the author so ypu read all the books and in order. I am not sure why did this other than The other I read gave a more detailed background of Sally but so glad I read and if I hadn't I would have really missed a lot of the story. I am enjoying the heck out of this series! I have never listened or read to anything similiar and I was really suprised at how much I am enjoying these. The audio on these is great and affordable with kindle. I do read all kinds of genre although horror especially realistic horror that gives you chills. But I am always open and this is why! So worth it when you find a great author! I do love the snarky humor, gore and action. By now in most series quite bored especially considering these are long books which I absolutely love! I get frustrated paying for books in series when only 100 or 200 pages. lol

i genuinely love these books and this story is even better then the rest. it's full of call backs and ties together the loose ends of all previous plots.